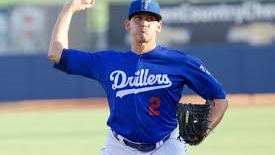 Pitching prospects are always a little harder to predict success for at the top levels, especially when we see them for the first time. They will be facing the best hitting they have ever faced, in high stress situations, and if you add in the fact that many of them have innings limitations, my feeling is that I prefer hitting prospects over pitching prospects for fantasy baseball purposes, because I think their success may be more immediate.

However, that doesn't mean that these pitching prospects can't provide value this season. Last year, Julio Urias struck out over a batter per inning and from August on, had an ERA under two, so it can be done. Below is a list of MLB pitching prospects who I feel have the potential to make an impact this season. Like I did with the hitters (which you can find here if you missed it), I am excluding those prospects like Jameson Taillon and Tyler Glasnow, who are likely to make the Opening Day roster and will likely be drafted most in fantasy baseball drafts. The players listed are those that are likely to go undrafted in your fantasy drafts, but players you should definitely keep tabs on, in hopes they can help your squad later in the season. Make sure to check back with us regularly, because during the season, we will also be featuring a weekly column as to how some of the top prospects are performing in the Minor Leagues.

Jose DeLeon, Tampa Bay Rays. The Dodgers had a glaring hole at second base, and in order to fill that hole, they had to move a big piece in their farm system. That piece was Jose DeLeon, who they shipped to Tampa Bay in return for second baseman, Logan Forsythe. DeLeon has a really good fastball with movement and maybe an even better changeup and he has the potential to be a very good strikeout pitcher in MLB. He's also going to be pitching in a pitcher friendly park in Tampa, and while I don't expect to see him make the Rays' Opening Day rotation, I don't think it's too long before we see the top prospect in a Rays' uniform. He may be not be Alex Reyes, but Luke Weaver may be able to help your fantasy baseball team.

Luke Weaver, St. Louis Cardinals. My partner at Fighting Chance Fantasy, Ryan, is a huge St. Louis Cardinals fan. That's why I heard him crying from several states away when it was announced that Cards top pitching prospect, Alex Reyes, would miss this season and have Tommy John surgery due to an elbow injury. Fear not Ryan, because although he's not to the same level of a prospect as Reyes, Luke Weaver is waiting in the wings to prove to people that he can be a fixture in their rotation as well. Weaver's fastball is in the mid 90's with movement on it, and while he struggled a bit given his run in St. Louis last year, he may get an opportunity, possibly even making the Opening Day rotation, to show that he can be a part of their rotation going forward.

Josh Hader, Milwaukee Brewers. If you like strikeout potential, Josh Hader may be your guy. He has a fastball in the mid 90's with a nasty slider, and that enabled him to strikeout almost 12 batters per nine innings across all levels last season. He was cruising in Double-A ball, but once called up to Triple-A, he struggled in the hitter friendly, Pacific Coast League. He could still use a little more seasoning in the Minors, but once he shows he's ready, the Brewers have no major reasons to hold him back from joining their club.

Reynaldo Lopez, Chicago White Sox. The White Sox were a very active team this offseason, and one of the blocbuster deals they made was moving Adam Eaton to the Washington Nationals, in return for Lucas Giolito and Reynaldo Lopez. Even most casual fans have probably heard of Giolito, but with his struggles last season in both Triple-A and in the Bigs, MLB.com had actually moved Lopez ahead of him in their prospect rankings for the Nationals. Lopez can hit 100 on the radar gun, but his secondary pitches have been more effective. While I think Giolito may have a better shot to make the Opening Day roster for Chicago, I think Lopez has every opportunity to be more effective when given the chance.

Brent Honeywell, Tampa Bay Rays. Right handed pitcher, Brent Honeywell may not be the guy who is going to regularly hit 100 MPH on the radar gun. However, he has a fastball in the low 90's that has a lot of movement, as well as five pitches in his repertoire. He's a fierce competitor and is very adept at setting up hitters, and along with DeLeon, could be a major piece of the Rays rotation for years to come. Michael Kopech posts way too many pics on social media with his girlfriend. Wait a minute. No. No, he doesn't...

Michael Kopech, Chicago White Sox. In order for the Boston Red Sox to land Chris Sale in a trade from the White Sox, it cost them a king's ransom. Everyone knows that Yoan Moncada was the biggest piece moving to Chicago, but don't sleep on Michael Kopech, who was also part of the deal. Kopech is a flame throwing, starting pitcher who regularly hits the high 90's with his fastball and has recorded 105 MPH this spring. He has a slider in the low 90's, and if you want a pitcher with the potential to replace Sale in the White Sox's lineup, Kopech has that upside. I am concerned that he may not see much MLB action until 2018, and that's the only reason he's not higher on this list. However, he's someone to watch and if you see his name being recalled to the Big Leagues, make sure to take a stab at him.

Jeff Hoffman, Colorado Rockies. Jeff Hoffman was drafted ninth overall to the Toronto Blue Jays in 2014, but was one of the pieces that was moved to the Rockies when they traded for Troy Tulowitzki. According to MLB.com, Hoffman possesses an above average fastball and curveball, and can mix in a changeup and slider to boot, and they project him as a number two type pitcher in the rotation. Holding him back from being higher on this list is that when he's called up, he will have to pitch in the best "hitters park" in MLB at Coors field, so make sure to temper expectactions.

Yohander Mendez, Texas Rangers. Venezuelan, Yohander Mendez, possesses one of the best changeups in all of the Minor Leagues and that has led him to be the number two prospect in the Texas Rangers organization. He has had some elbow issues and that has led him to never top 114 innings in a season, so I'm sure there be a check on his innings in 2017. While I don't think he's a must add when he's called up, he's definitely worth monitoring and be ready to jump on him if he looks impressive.