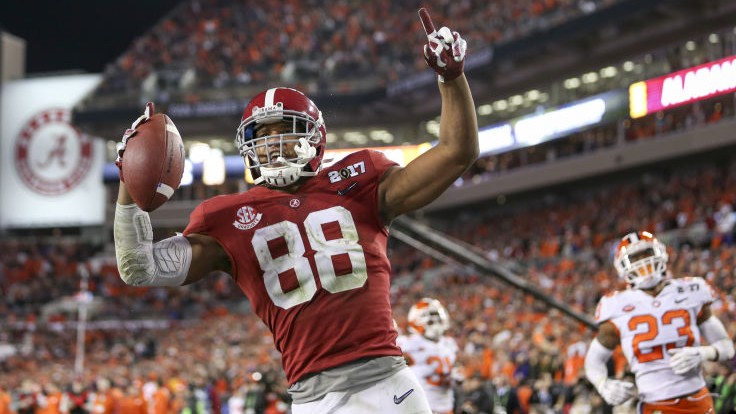 Before you read any further, I want to warn you...you will be enamored by the names of some of these rookie quarterbacks and tight ends, but don't get your hopes up on elite production from them in year one. These are two positions that it is very rare to see rookies excel at from day one, and while you may know their names, don't expect them to become fantasy saviors for you in 2017. That's not to say they don't hold any value, however. Several of these players could play an important role in leagues this season, even if it's for spot starts for you throughout the year or as quality backups. Read on to see what you can expect from the rookie play callers and tight ends this season!

Deshaun Watson, Houston Texans. If you're a fan of college football, one thing that you likely know, is that Deshaun Watson has been clutch in big games for the Clemson Tigers. The big lights bring out the best in Watson, and he did some of his best work in the biggest of games. Just ask Nick Saban.

Deshaun Watson can get you with his arms and his feet

Of all quarterbacks in this incoming rookie class, Deshaun Watson fell into the best situation on draft day. Houston is close to competing for a championship, and the main thing holding them back has been the quarterback position. Enter Deshaun Watson. With only Tom Savage and Brandon Weeden as other quarterbacks on their roster, Watson has a very good opportunity to start on day one. With weapons like DeAndre Hopkins, Will Fuller and Lamar Miller, he could be a decent fantasy quarterback in 2017 as well.

There are some pros and cons about Watson. First the pros. I already mentioned the poise he showed in big games, but he is also good at reading defenses pre-snap and hitting the right receiver. He may not be as proficient in going through all of his reads as I would like, but he throws a nice ball and can get it where it needs to be. He's also very athletic, as he rushed for 26 scores in his 35 starts at Clemson. That is definitely a nice thing to have for fantasy football purposes.

The main cons for Watson are his questionable accuracy and velocity. From what I've watched, I'm not as concerned as some, but the NFL game plays very fast and if you can't get the ball where it needs to be, when it needs to be there, that can be a problem. I will be reading reports out of training camp, and watching him very closely this preseason. If Watson can show he can handle these two things, I think he has a legitimate shot at being the Week 1 starter. If he is named the starter, I would rank him as a lower end QB2 initially, with the caviat I would move him up a bit if he shines in camp.

Mitchell Trubisky, Chicago Bears. I have to say, it seems a little pretentious to me that we now have to call Mitch Trubisky, "Mitchell". Seems like he will be an appropriate replacement for Jay Cutler, I guess. Anyways, on to "Mitchell" Trubisky.

Trubisky was selected with the second overall pick in this years draft to hopefully become the franchise quarterback of the Bears. The big question is, will he be the starter in Week 1? I highly doubt it. That's because Chicago also signed free agent quarterback, Mike Glennon, to a three year, $45 million deal, and it makes sense that the Bears wouldn't invest so much money on Glennon to have him never start a game for them. Especially since Trubisky has only been the starter for one season at the collegiate level.

Here's what I really like about Trubisky. He's accurate. Accuracy is a debatable topic, but many experts believe that accuracy is the one thing you can't teach a quarterback. I'm no expert, but I subscribe to that theory. He has the mechanics to flourish in the NFL, but being a one year starter, he is going to need time to develop. The main problems he has is in blitz pickup and touch on his deep ball, and those are things that can develop over time as he learns the offense and develops rapport with his receivers. I think the Bears will take a cautious approach with Trubisky and allow Glennon to start the season. If Glennon does well, then they can sit the rookie his freshman year. If Glennon flounders, then we may see the second overall pick later in the season. Unfortuantely, neither situation puts Trubisky on my radar in redraft leagues this year.

Other Quarterbacks to Watch

OJ Howard, Tampa Bay Buccaneers. If you want to see a specimen of a man, check out OJ Howard. He's 6'6', 251 pounds and oh yeah, he also runs a 4.51 40 yard dash. He has great hands, as he only had six total drops in his three years at Alabama, and three of those came in his first year. He also graded out as Pro Football Focus' top, run blocking tight end last season as well. This guy is the total package. He's big, fast, has great hands, and should be on the field most plays due to his adeptness at blocking. He should be the number one, rookie tight end off the board in dynasty, rookie drafts.

It's a little harder to gauge his value in redraft leagues for 2017. Rookie tight ends rarely produce great numbers, but if anyone can "Buc" that trend, it's Howard. Pun intended. He also has a lot of competition for catches as the Bucs have added DeSean Jackson to pair with stud, Mike Evans. They also still have Cameron Brate on the roster, who happened to finish as the TE7 in PPR leagues last season, so I don't see him conceding all of his responsibilities to the rookie either. I would put Howard as a middle of the pack TE2 in drafts this year, but has the upside to finish as a TE1. He will definitely be a target of mine in leagues I draft a backup tight end.

David Njoku, Cleveland Browns. If you want to watch a fun tape, watch some highlight films of Cleveland's new tight end, David Njoku. He's a future star in the NFL. The Browns must have done their due diligence, because they felt so confident in his abilities, they released incumbent tight end, Gary Barnidge before the draft had even concluded. I'm a huge fan of the NFL draft, and I can't remember another time I've seen that occur. 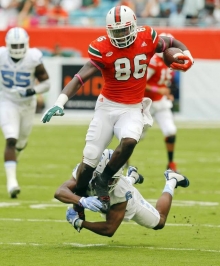 I have a feeling we will see a few highlight plays from David Njoku this season.

Njoku is 6'4', 245 pounds, and has the size, speed and toughness to excel as a tight end in the NFL. He has the speed to outrun defenders, but is also willing to punch you in the mouth. Those attributes allowed him to average an amazing 11.2 yards after the catch in 2016. With second year tight end, Seth DeValve has his primary competition for catches among tight ends, I think it's fair to say Njoku will likely be very involved from day one.

There are two things that bring me concern however. The first is the same concern that plagues all rookie tight ends, and that it is very rare for a first year tight end to produce quality, fantasy numbers. It's a tough position to pick up and not many rookies are top fantasy producers. The second concern is who is going to throw him the ball. Right now, the leading candidate is Cody Kessler, but they still have Brock Osweiler, as well as rookie, DeShone Kizer who could be in line for snaps as well. That doesn't make me feel warm and fuzzy inside. Overall, he would be my second choice of rookie tight ends in redraft leagues among the rookies, and should be drafted in the TE18-22 range.

Evan Engram, NY Giants. The Giants were looking to add some weapons on offense this offseason, and they did just that. Not only did they pick up free agent receiver, Brandon Marshall, but they also added tight end, Evan Engram with the 23rd overall pick in this years' NFL draft. Paired with Odell Beckham and second year receiver, Sterling Shepard, the Giants should have a very formidable offense in 2017.

Engram is 6'3',234 pounds, and is an athletic freak. He ran a 4.42, 40 at the combine and should be able to create mismatches over the middle of the field. His size and blocking ability, or lack thereof, make him more of a receiving threat than a blocking tight end, but for fantasy football purposes, that's fine by me. There are a lot of mouths to feed in the Giants' offense, so while I think he has a bright future in New York, he's nothing better than a lower end TE2 in redraft leagues this year.

Other Tights Ends to Watch