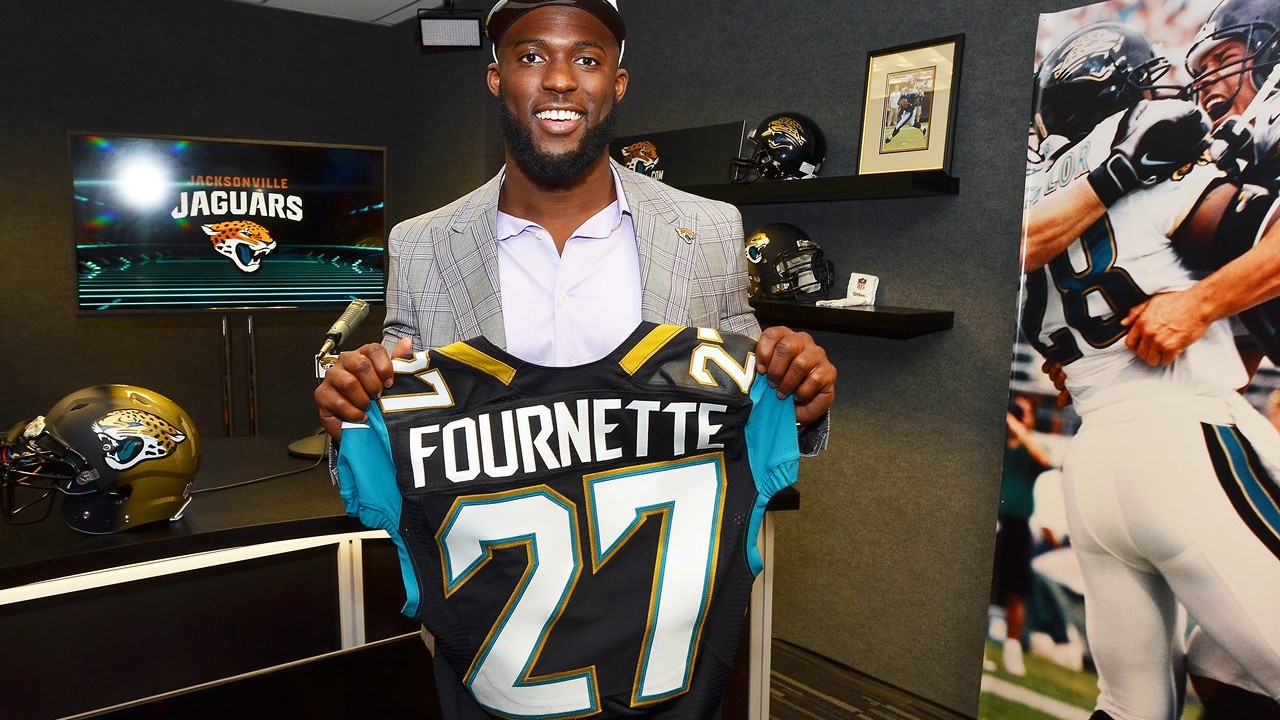 Man I love this time of the year! Baseball is in full swing and it's time to start adding in some football prep work for the upcoming season. With the NFL draft wrapped up, what better way to start your prep by getting familiar with the incoming ctop of rookies?

Let's get down to business. Last season, the hot, draft strategy was the "zero running back strategy". It didn't take long for people to realize that a balanced, fantasy squad may be a better idea than punting an important position. So let's start with the formerly abandoned position of running back where I can let you know what you can expect from the top rookies at the position this season.

Leonard Fournette, Jacksonville Jaguars. At 6'0' and 230 pounds, fourth overall pick Leonard Fournette is a mountain of a man. He uses his size, in combination with an effective stiff arm, to shed tacklers and gain yards after contact. He battled injuries in 2016, but he broke 85 tackles in 2015, and had finished second in yards after contact behind only Derrick Henry. Not only is he a big guy, but he also has good acceleration and vision, and I can easily see him reaching 1,000 yards with the potential for double digit scores in 2017.

Whereas Leonard Fournette excels in the rush game, he hasn't shown a proficiency in the passing attack. Not only does he have only 40 career receptions, but according to Pro Football Focus, he dropped eight of his 48 catchable balls. I have a feeling that we will see TJ Yeldon on the field when the Jags are on passing downs. However, even without a big role catching the ball, Fournette still has the size and speed to be a borderline RB1 in fantasy leagues this season.

We all know that Christian McCaffrey can catch the ball, but he's set to show how good he is running the rock as well.

Christian McCaffrey, Carolina Panthers. Not only was Christian McCaffrey the best receiver among running backs in this years' NFL Draft, but he was one of the best overall pass catchers period, even among wide receivers. He's that good. Not only that, but he a pretty darn good running back as well. He rushed for 21 touchdowns and almost 4,000 yards over his three year career at Stanford. He was one of the top running backs as far as SPARQ scores, which measures things like speed, agility and acceleration. Throw in the fact he was the best running back in picking up the blitz in this years' draft as well as an electric kick returner, and I wouldn't argue if you wanted to make McCaffrey the number one rookie running back off the board in fantasy football leagues this year. Actually, he should be the number one rookie back selected in PPR leagues in my opinion.

So will McCaffrey assume a full-time role in Carolina in 2017? I think he will see plenty of work, but Jonathan Stewart is still around to snag some fantasy value from him. Stewart has averaged 230 rushing attempts and almost eight touchdowns per season in the last two years, so I think he still has a place in the offense, particularly on early downs. That being said, McCaffrey is the better running back, so I can see him at worse, splitting the carries 50/50 and getting a majority of third down/passing work. He will be a very productive fantasy running back in year one.

Dalvin Cook, Minnesota Vikings. Dalvin Cook could very well be the best running back that was selected in this year's NFL Draft. He's 5'10', 210 pounds and runs a 4.49, 40 yard dash. He's a patient runner that can find the holes, and once he hits them, he can break off a huge gain in a blink of an eye. Maybe even more impressive is the fact that led the entire FBS in Pro Football Focus' Elusive Rating last season, when he broke 99 tackles and averaged over 4 yards after contact. Those are things that can lead to success in the NFL...just ask Jordan Howard.

However, while he may have the most success, Cook also has several question marks. Huge question marks, as a matter of fact. First, there are some off-field concerns. Cook allegedly punched a woman in 2015, but since it wasn't caught on camera like Ray Rice and Joe Mixon, it hasn't gaineded quite the attention. He is also accused of leaving three pit bulls chained by their necks to a tree, as well as two other run-ins with police while at Florida State. Not quite the picture of a model citizen. He also has injury concerns, as he has had three shoulder surgeries during his college career. Throw in the fact that he has also had fumbling problems, and there are several reasons why to be a little concerned with Cook.

Here's my bottom line on Dalvin Cook. I love his talent, but with Latavius Murray in town, as well as Jerrick McKinnon, he likely won't become a high volume running back right away. I think he will be eased in to playing time, although he will have the opportunity to seize a larger role with his productivity and the inevitable, ineptness of Latavius Murray. There are also several paths for him to disappoint as mentioned with his character issues, injury history and ball control problems. Ask Matt Jones in Washington how quickly fumbles can get your ass parked on the bench. I think he has limited value in year one, and if he keeps his head on straight, could become much more valuable in fantasy leagues down the road.

Joe Mixon, Cincinnati Bengals. Joe Mixon may be the most complete back in this years' NFL draft, but his off-field concerns forced him to fall to the Bengals in the second round. See, some folks don't think it's appropriate to blast a girl in the face at a restaurant (I am one of those folks), and word has it that Mixon was taken completely off several teams' draft boards.

Since he's drafted however, let's take a look at his football skills. Mixon is 6'1', 225 pounds and while he doesn't have elite speed, he's very adept at forcing players to miss as he was among the leaders in missed tackles among this years draft class. He is also an excellent receiver, so he has the potential to become a three-down back in the NFL.

While he has the potential to be on the field for every play, the fact of the matter is, that the Bengals still have Jeremy Hill and Gio Bernard on the roster, so it will be interesting to see how playing time shakes out. Even though I think Mixon may have more upside than the three backs I have listed above, I think Fournette, McCaffrey and Cook should be drafted ahead of him due to his competition for carries. 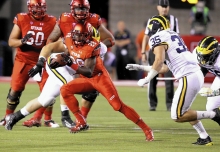 Joe Williams may be a much better fit for Kyle Shanahan's system than Carlos Hyde.

Joe Williams, San Francisco 49ers. That didn't take long. It looks like new 49ers GM, John Lynch, and head coach, Kyle Shanahan, may already be souring on incumbent running back, Carlos Hyde. Hyde's power running style may not be a great fit for Shanahan's zone running scheme, so the Niners took Joe Williams out of Utah in the fourth round. Williams is 5'11', 210 pounds, is very fast, and has nice lateral agility. It has been reported that Kyle Shanahan was so passionate about drafting him, that he "Banged the table" for Williams in the draft room. Whatever that means...

Anyways, Hyde's situation is definitely one to watch this summer. If Hyde is still on the team, I can see roughly a 50/50 split in carries between the two, with Hyde handling more in the passing game. If Hyde is given his pink slip, Williams could be in line for a substantial work load in year one. Williams is becoming a hot name in fantasy circles and could gain even more steam, throughout the summer.

Samaje Perine, Washington Redskins. I think it's fair to say that the Matt Jones experiment in Washington didn't turn out quite the way the Redskins would have hoped it would. It got so bad, Jones became a healthy scratch for the second half of last season and the role of lead back was handed to undrafted free agent rookie, Rob Kelley. Kelley was good, but not great, and thus the Skins looked at the draft and selected Samaje Perine in the fourth round. The funny part is, "Fat" Rob Kelley is actually smaller than Perine, who tips the scales at a healthy, 235 pounds. I can see Kelley still handling a good portion of the early down work this season, Chris Thompson working passing/third downs situations, and Perine possibly getting some short yardage and goal line work. I don't see him becoming a fantasy juggernaut this season, but he could be in line for a decent amount of scores if the Redskins feel confident about his ball security.

Marlon Mack, Indianapolis Colts. One of the best athletes in this draft, Marlon Mack was drafted in the fourth round by the Colts to hopefully be the heir to 57 year old, Frank Gore. Mack ran a 4.5, 40 and may be the running back in this upcoming class with the most breakaway ability. That was evident as more than half of his 1,100+  yards last season at South Florida, came on 15 carries. He may dance around a little bit too long in the backfield, but with his breakaway speed and ability to be proficient catching the ball, I don't see Robert Turbin or Josh Ferguson putting up much of a battle with Mack for the handcuff duties. Gore has to break down sometime, right???

Other running backs that you should keep an eye on in training camp: