The Braves may have been a fantasy wasteland over the past few years, but there is now a light at the end of the tunnel! They have some of the brightest young prospects in baseball, and we should see several of them in a Braves uniform this season, making them a fun team to watch. I'm not ready to say they will be a playoff team this season, but they are definitely heading in the right direction.

Braves first baseman, Freddie Freeman missed six weeks of last season due to a broken wrist, but that didn’t stop him from swatting almost 30 homers and driving in over 70 runs. First base isn’t typically a position you look at when trying to acquire steals, but even with missing a month and a half, Freeman still finished sixth at the positon with eight stolen bases. If he gets a full complement of plate appearances in 2018, he should be able to hit 35 homers with 10+ steals, and he should be one of the first five, fantasy first basemen off the board in drafts this year.

While first base is a position of strength (at least from a fantasy perspective), third base isn’t quite so attractive for the Braves. First dibs to man the bag will likely go to Johan Camargo who offers your fantasy squad diddly squat. That isn’t good by the way. Over six years in the Minors, Camargo has a total of only 12 home runs and 22 stolen bases. He did hit .299 in 256 plate appearances for the Braves last year, but with an extremely high BABIP of .364, I expect that to drop 20 or 30 points in 2018. He is not worthy of a draft pick in standard leagues. 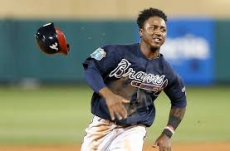 Stolen bases are harder to come by in fantasy baseball than home runs, making Ozzie Albies a bit more valuable.

There is a talented duo of prospects in Ozzie Albies and Dansby Swanson manning the middle of the infield for the Braves this season. Ozzie Albies got the call to the Big Leagues in August and proceeded to impress, as he hit .286 with six home runs and eight steals in only 57 games. He could help your team in batting average, runs and steals, and with power being more easily accessible than speed in fantasy leagues, Albies could be a top 12 fantasy second baseman as soon as this season. Swanson will start the season at shortstop, but after a disappointing 2017, he shouldn’t be on your radar as anything other than a late round flier.

The Braves have two catchers in Tyler Flowers and Kurt Suzuki that should both see plenty of plate appearances in 2018. Both hit double digit home runs last season as well as hit for decent average. The problem is that they will likely split time pretty evenly, reducing both of their values in 2018. Because of that, they should only be considered as low end options in two catcher leagues.

I like outfielders who can hit double digit home runs as well as steal 20 bases, and that’s exactly what you could get if you draft Ender Inciarte. He hadn’t shown much power until last season, but his fly ball rate has increased in each of his four years at the Major League level, and he may be growing into his power at only 27 years of age. He has a career .295 batting average, so when you add that to the potential for 20 steals, Inciarte is a very solid OF3 with a relatively high fantasy floor.

Get to know Ronald Acuna...just don't overdraft him!

If you play dynasty fantasy baseball, you already know that there are few prospects as highly touted as Ronald Acuna. If you don’t monitor players in the Minors that closely, let me introduce you. Acuna has the ability to be a high end, five-tool fantasy player, but his upside in 2018 is based on how soon we see him in the Majors as well as how quickly it takes him to adjust to Major League pitching. The Braves may decide to wait to promote Acuna until the Super Two deadline in June, but with a new stadium and the need to sell seats, there is a chance we see him sooner. This is definitely a situation worth monitoring in spring training. Currently, Acuna is being drafted as the 30th outfielder off the board on Couch Managers, and I'm not sure I quite feel comfortable with that. I think he will be really good for years to come, but I worry that lack of plate appearances coupled with his learning curve, is not going to have him pay dividends at his current average draft position.

Nick Markakis will round out the outfield in Atlanta and can be safely bypassed on draft day.

I’m honestly not in love with any of the starting pitching in Atlanta. Julio Teheran has had an ERA north of 4 in two of the last three seasons and doesn’t strikeout a ton of batters. At 27 years old, he still has time to take it to the next level, but he walks too many batters and his control issues doesn’t leave me with a warm, fuzzy feeling inside.

If you like strikeout potential with a late-round pick, consider selecting Braves lefty, Sean Newcomb.

Sean Newcomb may be the pitcher who I like best on this roster, especially at his expected draft price. He pitched in 100 innings last year, struck out over a batter an inning (9.72 K/9), and can likely be had with a late round pick. He will turn 25 this season and will likely have some ups and downs, but the upside is there as a type of player I like to invest in at the end of drafts.

Speaking of a player that may be worthy of a late round flier, you may want to consider targeting Luiz Gohara. Gohara is only 21 years old, but looked fairly impressive in his 29 inning debut last September. He has battled weight issues in his career, but he came into camp in great shape last year and that helped improve his velocity, which he was in the mid-90's with his fastball, as well as his endurance throughout the season. With the additions of Brandon McCarthy and Scott Kazmir, I am predicting he begins 2018 in the Minors to get a little more seasoning, but when we see him in the Braves rotation, he could be a serviceable fantasy player. If you don't take him at the end of your draft, keep him on your watch list and be ready to pounce when you hear he gets the call.

The rest of the pitchers aren’t worth drafting in anything but the deepest of deepest leagues. Their rotation will be filled out by Mike Foltynewicz, and a combination of veterans Brandon McCarthy, Scott Kazmir, or youngster, Max Fried. These players can be as streaming options in the right situation, but I wouldn’t feel great about drafting any of them.

Arodys Vizcaino took over the closer role full time in Atlanta in August and proceeded to finish the season with 14 saves. He had 64 strikeouts in 57 innings and since I expect the Braves to be an improving team this year, I think he could see a fair amount of save opportunities. I like Vizcaino as a solid number two closer in 2018 with a shot at 30 saves and a fair amount of strikeouts.