The Baltimore Orioles are a very interesting team. They have plenty of bats, yet one of the weaker pitching staffs in the Majors. They have bright young talent in the likes of Manny Machado, Jonathan Schoop and Trey Mancini, hot prospects like Chance Sisco, Austin Hays and Hunter Harvey, yet still have aging veterans Chris Davis, Mark Trumbo and Adam Jones contributing. I wouldn't be surprised if this team performed well and were buyers at the MLB trade deadline, yet wouldn't be shocked one bit if they were sellers. Regardless of whether you think this team is loaded with talent or heading towards a rebuild, one thing we can say about this team is they have some really good hitters than can help your fantasy team.

Do you like power from your first baseman? Well, Chris Davis definitely has some pop in his bat. Unfortunately he also will kill your batting average and strikeout a “shit-ton”. Last year he struck out almost 40% of the time (37.2%) and had a batting average of only .215. Honestly, about the only scenario that I see myself even considering drafting Davis is if I drafted several players that are very good in batting average and I was still lacking some power late in the draft. Even then I would find it hard, so my point is that you should probably leave Chris Davis alone in standard sized leagues this year.

In a “down year” where Manny Machado only hit .259, he still hit 33 home runs, scored 81 runs and batted in 95. Yes his average dropped to .259, but if that’s the 25 year old’s floor, sign me up! I am going to attribute his down 2017 to either bad luck (a lower than normal BABIP) or possibly lingering issues from a wrist injury he suffered in June, in which he should be fully recovered to start this season. He’s currently being selected in the second round of fantasy drafts, and I love the thought of having him as my second pick. He will also be starting the season at shortstop, so when you add the fact he will have 3B/SS eligibility, he is locked in as an early to mid, second round pick. 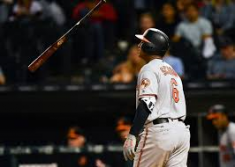 In my opinion, second base is more shallow this season than it has been in previous years, so getting a guy like Jonathan Schoop could be a huge grab for you.

The Orioles have a bright young star at second base by the name of Jonathan Schoop. Among second baseman, Schoop was second in home runs (32) in 2017, led the position in RBIs (105) and almost hit .300 (.293). I do expect his batting average to drop a bit, but his power is legit and he should be one of the first five to seven second baseman off the board in drafts this year.

Last season Baltimore acquired Tim Beckham on July 31 and he went on to have an August to remember. That month, he hit .394 with six home runs, 19 RBIs and scored 27 times for his new team. He cooled off in September, but he’s showed he can be a productive player at the shortstop position. I wouldn’t want to be forced to have him fill my shortstop positon, but his 20-10 upside would make me feel decent about having him as my middle infielder.

The Orioles will likely have a two person platoon behind the plate this season. Caleb Joseph saw 266 plate appearances last season and hit a respectable .256 with eight home runs. However, he’s likely just keeping the seat warm for Chance Sisco, who is the number one prospect in Baltimore’s system according to mlb.com. Sisco is a patient hitter who makes great contact, but is more of a gap hitter than a home run guy. His fly ball percentage has improved almost every year throughout the minors and at only 23 years of age when the season starts, he could develop into a very nice real life (and fantasy) catcher. As of now, he’s only a low end option in two catcher leagues, while Joseph can be passed over.

If you like to know exactly what you’re going to get when you select a player, you likely want to put Adam Jones on your list of targets. Jones has had at least 581 plate appearances in eight straight seasons, will hit 25-30 home runs, will net roughly 80 runs and RBIs while hitting around .270-.280. He doesn’t steal many bases anymore, but at 32 years old, he still has plenty of life left in him. To me he’s a rock solid OF3/4 guy who may not light up any category, but will bring safe production to your squad. 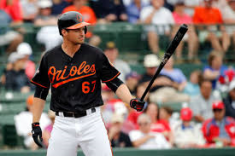 Trey Mancini could be a nice source of power for you late in your fantasy draft.

It’s always nice when prospects perform as expected and last year Trey Mancini definitely didn’t disappoint. In his first real stint in the Majors (he played in five games in 2016), Mancini slugged 26 home runs while hitting .293. As Tommy Boy stated, “Me Likey”! Until last season Mancini has only played first base, but last year he played 88 games in left field to go with 42 games at first, so he is aided with 1B/OF eligibility. He is aggressive at the plate and could become a 30 home run hitter in the very near future.

On Opening Day, I wouldn’t be surprised to see Joey Rickard hanging out in right field, but as soon as the O’s feel that number two rated prospect Austin Hays is ready, I think he supplants Rickard as the everyday outfielder. According to mlb.com, Hays has above-average bat speed and a short swing with very little wasted motion. He could develop into an above-average hitter with decent power, but for 2018, I would feel better putting him on my watch list rather than drafting him in standard sized leagues. Rickard is not worth a draft pick.

2018 was kind of a strange year for Mark Trumbo when digging into his stats. Trumbo’s batting average dropped 22 points and he went from 47 home runs in 2016 to 23 in 2017, despite no major differences in BABIP, walk rates, strikeout rates, or fly ball/ground ball rates. His hard hit percentage was the lowest it’s been since 2011, but other than that, not much sticks out. Yes, he did have 64 less plate appearances, but I’m going to chalk 2017’s dip in production to bad luck and expect his power to rebound a bit in 2018. I don’t think we see him return to the 40+ home run guy we saw in 2016, but I think 30 dingers are definitely within reach for him.

For fantasy purposes, the Orioles really only have two pitchers to consider on draft day, and I’m not quite sure I feel good about endorsing either one. Kevin Gausman disappointed last season as his ERA ballooned from 3.61 in 2016 to 4.68 and his WHIP went from 1.28 to 1.49. His command suffered and it was evidenced in an elevated walk rate and higher opponent’s batting average. He does offer a little in strikeouts as he K’s almost a batter an inning, but I just don’t see him having a huge rebound in 2018. 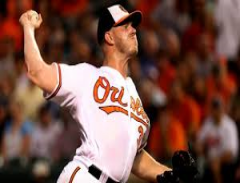 At only 25 years old, Dylan Bundy could very well take a step forward in 2018.

The other starter for Baltimore who I may like a bit more than Gausman, is Dylan Bundy. I participated in an early set of industry mock drafts set up by Justin Mason from Friends with Fantasy Baseball and Fangraphs, and Bundy went approximately two rounds later than Gausman despite putting up better numbers. Bundy introduced a slider into his repertoire last season after previously not throwing it once in the Majors, and if he can refine that a little more, I think we can even see a slight improvement in performance this year. I wouldn’t want to have to rely on Bundy, but if I selected him as a fifth or sixth starter on my fantasy team, I would feel pretty good about it.

The rest of the Orioles rotation leaves something to be desired. We will likely see the likes of guys like Gabriel Ynoa, Alec Asher, David Hess or possibly even reliever Miguel Castro who made his first career start towards the end of last season. About the only pitcher I would even consider keeping an eye on, would be prospect, Hunter Harvey. Harvey has dealt with some elbow issues in the past and had Tommy John surgery in 2016, but is now back and ready to show off. With limited innings due to injuries, I’m not sure we see him this season, but if they do decide to call him up later in the season, he could be an interesting player to grab off the waiver wire.

Those that selected Baltimore closer Zach Britton last season were rewarded with a top closer that missed the first couple of months of the season with a stained flexor tendon. He did come back and pitch 37 innings and notching 15 saves, but it was disappointing nonetheless. Unfortunately, the injury bug has hit Britton once again as he suffered a ruptured Achilles tendon in December and will be out roughly six months. With a return possibly around the All-Star game, he will likely miss the first three months or so of the season. If your league has a DL spot(s), it makes it easier to draft him. If you have a shallow bench, you may just want to take a pass.

While Britton was out last season, Brad Brach performed closer duties and recorded 18 saves of his own. Brach is a good, not great, pitcher and with likely a limited amount of closing opportunities (three months?), I think I would ideally want him as my RP3. If you select him as your second closer, maybe invest in a third a little earlier since he may not be a good source of saves after June once Britton returns.