If you're expecting the Reds to be a contender this season, you may want to "lay off the sauce" a little bit. The rebuild is continuing in Cincinnati and they appear a few years away from putting a really good product on the field. That doesn't mean they don't have anyone who can't help your fantasy baseball team however, as they have a few pieces that can really Help you out in 2018. Let’s check them out!

Joey Votto is one of the best hitters in the game and can add stability to your fantasy squad.

If you want one of the safest players in fantasy baseball, don’t be afraid to target Joey Votto late in the first round of drafts or early in the second. Votto was tied for sixth in batting average (.320) in all of MLB, hit 36 home runs, batted in 100, and crossed home 106 times. Votto also walks a ton so if your league scores on base percentage rather than batting average, his value increases even more. Here’s why I like to target guys like Votto early in drafts. Later in drafts, there are tons of guys with power, but absolutely destroy your batting average. If you can snag a few guys like Votto early, it can help compensate if you are forced to draft one or two of the batting average killers later in your draft.

At the other corner, the Reds have Eugenio Suarez holding down the fort. Suarez is good, not great at just about everything. He is patient behind the plate as he hit .260 and walked over 13% of the time, which put him in the top 20 in base on balls last year. His power has come along and he should be able to hit 25 or so homers in 2018 to go along with 7-10 steals. He’s not a guy I would want in my third base spot, but it wouldn’t be the worst thing in the world if he occupied my corner infield position.

Along the lines of Eugenio Suarez, the Reds have two guys in Jose Peraza (SS) and Scooter Gennett (2B) who I wouldn’t want to fill their respected position spots, but I wouldn’t mind at middle infield. Both should hit around .270-.280, but Gennett can hit 20+ home runs while Peraza can steal 20+ bases. With stolen bases harder to come by than home runs, personally I would prefer Peraza over Scooter and both can likely be had in the bottom third of drafts this season.

Tucker Barnhart had a pretty damn good year last year. As a result, he was rewarded with a four year, $15.5 million contract extension, meaning he should be the Opening Day starter over oft-injured Devin Mesoraco. Barnhart is a really good “real life” catcher as he earned a Gold Glove Award last season beating out guys like Buster Posey and Yadier Molina, but he likely won’t help your fantasy team much. He’s a deep option in two catcher leagues, but shouldn’t be considered in one catcher formats. 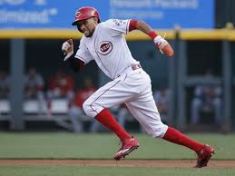 Billy Hamilton can help you "steal" a category, all on his own.

Remember how I said steals are harder to come by this year than home runs? Well, that may be one thing that pushes someone to draft Billy Hamilton this year, just so they can lock down the category. Hamilton will get you virtually nothing in terms of home runs and RBIs, but he can steal 50+ bases and help out in runs as well. He isn’t the liability in batting average as he once was, and I would consider him in the fourth through the sixth rounds as a guy who can help you seal up the stolen base category.

If you want a player who can hit 30+ home runs, but fall apart in the second half of the season, Adam Duvall may be your guy. He’s been a full-time player for two seasons now, and in each of those seasons, he’s collapsed after the All-Star Break. His power makes him worthy of a mid-round selection, but you may want to consider trying to trade him in June/July when his value is higher if he gets off to a good start.

Right field is a little up in the air for the Reds as far as fantasy value. Scott Schebler performed well last season as he joined the 30 home run club, but the Reds have number five rated prospect (according to mlb.com), Jesse Winker waiting for his opportunity to assume a full-time role. While Schebler has the power, Winker is a much better hitter who also walks a lot, increasing his value. With the uncertainty, I’m staying away from both this year, but either could be an option as a late-round pick if your outfield could use depth.

Do you like the old tv show M*A*S*H*? Well, I’m not sure even Hawkeye or Trapper could help the Reds starting pitching staff as they have had quite a few medical issues over the past few seasons. Pitching towards the top of their rotation is Anthony DeSclafani who missed all of 2017 with a partially torn right ulnar collateral ligament. Brandon Finnegan didn’t pitch after June last year as he had surgery to repair a torn labrum in his right shoulder. Homer Bailey has been dealing with multiple arm injuries for the past few seasons that has forced him to miss virtually all of 2015, 2016, and only pitch 91 innings in 2017. These guys remind me of zombies from the Walking Dead. 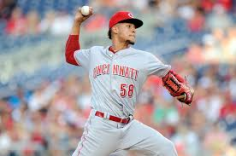 I am very bullish on Luis Castillo this year. Wait a minute, bullish is the good one, right? I always get them confused...

The only pitcher I feel good about on this Reds' rotation is Luis Castillo. Among starting pitchers with at least 50 innings pitched, Castillo finished tied with Luis Severino for the fastest fastball velocity at 97.7 miles per hour. Mix that with a good slider and changeup at 10-12 miles per hour less than his heater, and Castillo is rocketing up draft boards this year. He is currently being drafted as the 27th starting pitcher off the board over at Fantrax, and I honestly like him enough to even bump him up a few spots higher. He can strikeout over a batter an inning, get you a lower ERA and WHIP, and while the Reds may not help him earn a lot of wins, he has the stuff to overcome some poor offensive performances by the team.

One of the strengths of the Reds pitching staff is in its closer, Raisel Iglesias. The starter, turned closer excelled in his first season as the ninth inning guy as he pitched to a 2.49 ERA, struck out almost 11 batters per nine innings and earned 28 saves. At only 28 years old, he has an opportunity to be even better now that he has a full season under his belt in relief, and I see Iglesias being a top-ten fantasy closer for years to come.