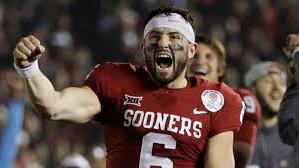 In this year's NFL Draft, there was a lot of debate as to how the incoming class of quarterbacks would come off the board. At any given point, any one of four quarterbacks were believed to be going to the Browns with the number one overall pick. In the end, Baker Mayfield was the chosen one to hopefully turn the franchise around and finally give the fans in Cleveland a playoff contender.

In fantasy football, it's not necessarily as easy as ranking the quarterbacks in the order they came off the board in the draft. When it comes to fantasy value in 2018, I take three things into consideration when ranking them for redraft purposes...talent, opportunity for playing time, and supporting talent around them. Barring injury, it appears none of the rookie quarterbacks will be behind center in Week 1, so we need to dig in and see who could get the nod first, as well as who can ultimately make the most of their opportunity when it does arrive. Let's get to it!

While I don't like his personality, Rosen is a very good quarterback with decent weapons at his disposal in Arizona.

While he may have a personality that's a little off-putting, there is no denying that Josh Rosen is a very good quarterback prospect. He's 6'4", 218 pounds and can chuck the ball all over the field. He was Pro Football Focus's highest rated rookie quarterback on intermediate throws, which could benefit him this year with guys like Larry Fitzgerald and Christian Kirk potentially occupying that space. He isn't afraid to throw the ball into traffic, and that aggression can lead to an interception here and there, but the Cardinals got themselves a quarterback who should be able to be very good for them as soon as this season.

I mentioned earlier that I take three things into account when I compiled my rankings of the rookie quarterbacks...talent, opportunity for playing time, and supporting cast. While I like another quarterback a bit better as far as talent, I think Josh Rosen has the best chance of earning significant playing time in 2018. Sam Bradford was signed by the Cardinals this offseason to hold down the fort until Rosen is ready, but Bradford missed all but two regular season games last season due to a knee issue, and has been riddled with injuries his entire career. I can easily see a scenario where Josh Rosen is thrust into action very early this season if, or when, Bradford goes down, and with guys like Larry Fitzgerald, Christian Kirk, JJ Nelson, and David Johnson, I think he could be a nice fantasy option when the time arises.

I'm going to start by saying that Baker Mayfield is my favorite quarterback in this draft when it comes to talent. Yes, Oklahoma runs a very favorable offense for quarterbacks, but Mayfield led the nation in completion percentage last year (71%), was second in passing yards (4340), second in passing touchdowns (41), while only throwing five interceptions. One of the things I love to see out of a quarterback is accuracy, and while we tend to see quarterbacks with a high completion percentage be the "dink and dunk" type passers, Mayfield's average depth of target per throw was 11.1 yards, which put him 14th in the nation last year. I know it's not fair to compare NCAA stats with the NFL, but that 11.1 yards average depth of target would have been second in the NFL last year behind only Deshaun Watson. I'm starting to drool... He has a fiery attitude, which I like but could be considered a weakness, and his height (6'1") is a concern for some, but I really think Mayfield will excel at the NFL level.

While I think Mayfield is a better quarterback than Josh Rosen, the Browns brought in Tyrod Taylor to be the place holder until he's ready. Taylor may not be an elite level quarterback, but he's a solid enough quarterback that I can see him being good enough where it would make it difficult to replace him with Mayfield. Tyrod has never had the talent around him in Buffalo that he does in Cleveland as well, as he has Josh Gordon, Jarvis Landry, Corey Clement and David Njoku at his disposal. If Tyrod doesn't keep the job all season, I think it's his until at least Week 12, which would follow their Week 11 bye. 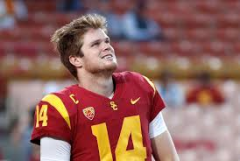 One thing I like about Sam Darnold is that it looks like he has fun playing the game.

There are things I really like about Sam Darnold and there are things that give me cause for concern. He has good size (6'3" 221 pounds), arm strength, and is very poised when sitting back in the pocket. He is extremely good at working the middle of the field and throws very well on the run as well. However, he's only a two year starter and is very prone at turning the ball over. He finished with 13 interceptions in 2017, and added 9 fumbles which worries me a bit. He's more raw than Rosen and Mayfield, but has significant upside to help offset that.

The Jets should be among the worst teams in the league in 2018 which means they shouldn't be in rush to get Sam Darnold on the field. They have a perfect quarterback in Josh McCown, who can help mentor the rookie and start as long as the Jets need him to. I'm not sure that Darnold will see significant playing time in 2018, but if he does, Robbie Anderson, Jermaine Kearse, and Terrelle Pryor don't give me a warm and fuzzy feeling as weapons for him to throw to. I like Darnold for dynasty leagues, but I don't see him having much value in redraft leagues this season.

If you like prototypical size for a NFL quarterback, and a cannon for an arm, Josh Allen is your guy. He can throw the ball almost the length of the field, but the bad part is, he struggles mightily with ball placement. In his two years as a starter in Wyoming, Allen never topped a 56% completion percentage and that worries me about his future in the NFL where accuracy is crucial. I understand he hasn't necessarily had the talent around him at Wyoming as some of the other top quarterbacks in this class, but the cupboard isn't necessarily stocked for him in Buffalo either.

I want to quote a tweet by Pat Thorman (@Pat_Thorman) when referring to the Bills. He states, "The #Bills plan to trade needed draft captital to move up for a high-risk QB, while surrounding him with laughable pass-catchers and a shaky OL is...interesting." The Bills could have one of the worst offensive lines in football this season and have Kelvin Benjamin, Zay Jones and Jeremy Kerley as their top receiving threats, and that spells trouble to me. I worry about both the short term, and long term success for Josh Allen, and I'm staying far, far away from him in redraft leagues.

One thing that I love in Lamar Jackson is that while he is very raw, his rushing ability will likely give him a higher fantasy floor when he eventually sees the field. However, with Joe Flacco as the incumbent starter, I don't see him seeing much, if any action in 2018. Jackson has a good arm, and can make the big play downfield, but he has also struggled with accuracy and poor decision making and may take a bit longer to develop into an NFL-ready quarterback. Jackson is a good dynasty prospect, but shouldn't have much fantasy impact in redraft leagues this season.