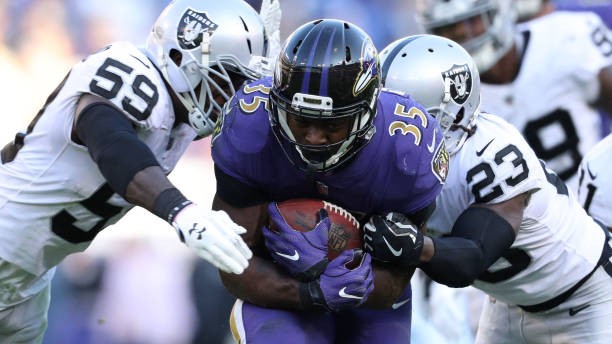 Week 17 is here, the final week of the NFL regular season and if you're still playing, it's your championship this week, so if you've been following along this season with starts and sits, myself and us at Fighting Chance Fantasy genuinely thank you! All of the interactions all season and offseason have been fantastic and we can't wait to keep that going coming into this 2020 offseason.

Whether it's our podcasts, streamer articles, waiver wire adds, rankings, start/sit, five game parlays, our Sunday roundtables, and everything in between, we hope there was something for everybody to sink their teeth into to make our fantasy football coverage not only informational but entertaining as well.

Thank you all as well for your kind words throughout the season, I'm happy knowing that we've helped even just one person reach the mountaintop and grasp that coveted league championship, but if you didn't win this year, we're going to do what we can to get you there in 2020.

Don't think we're going to stop after this week however, because the fun starts all over again leading up to the season opener in September of 2020! So keep tabs on Fighting Chance Fantasy throughout the offseason as we'll be continuing to gear up the content for all of you!

That said, let's get right into Week 17's starts, sits, and sleepers!

Ryan Tannehill has been damn impressive since assuming the starting quarterback job from Marcus Mariota. “Tannethrill” has only been QB4 since Week 6 and has double-digit touchdowns in each week. Tennessee is playing for their playoff lives and it’s possible Houston could be resting starters depending on the outcome of Kansas City/Los Angeles earlier in the day. If so, that’s only going to help Tannehill’s chances for a great game. Even if not, Tannehill should hit a solid 2-3 touchdown baseline with 250+ yards against a porous Houston pass defense.

Bills head coach Sean McDermott has already stated that Josh Allen won’t play the whole game, so he wouldn’t be a viable fantasy start because that could mean a series, a quarter, or a half. If you’re playing in a championship, I’d highly suggest many other quarterback options than Allen, even though he helped get you to this point. Bowl season may have come early, and 396 yards and 4 touchdowns later, Andy Dalton did all that he could in what could potentially be the “Joe Burrow Bowl”. This week, he matches up with Cleveland Browns, who have allowed just over 20 fantasy points to quarterbacks on the campaign. With nothing left to play for but pride, look for Dalton to throw the ball a ton as this could be an audition for him in a new location for 2020.

If you’ve got Kenyan Drake on your roster, he’s almost single-handedly carried your entire roster to this point the last two weeks, with six touchdowns in the past two games. He’s been absolutely electric and made Cardinals fans ask “David Johnson who?” Now expecting multiple touchdowns may be a stretch, but he’s been one of the only things that’s worked in the Arizona offense for the last few weeks and with the potential of Kyler Murray being out, Kenyan Drake is going to get a ton of touches and should be an easy RB1 for Week 17. 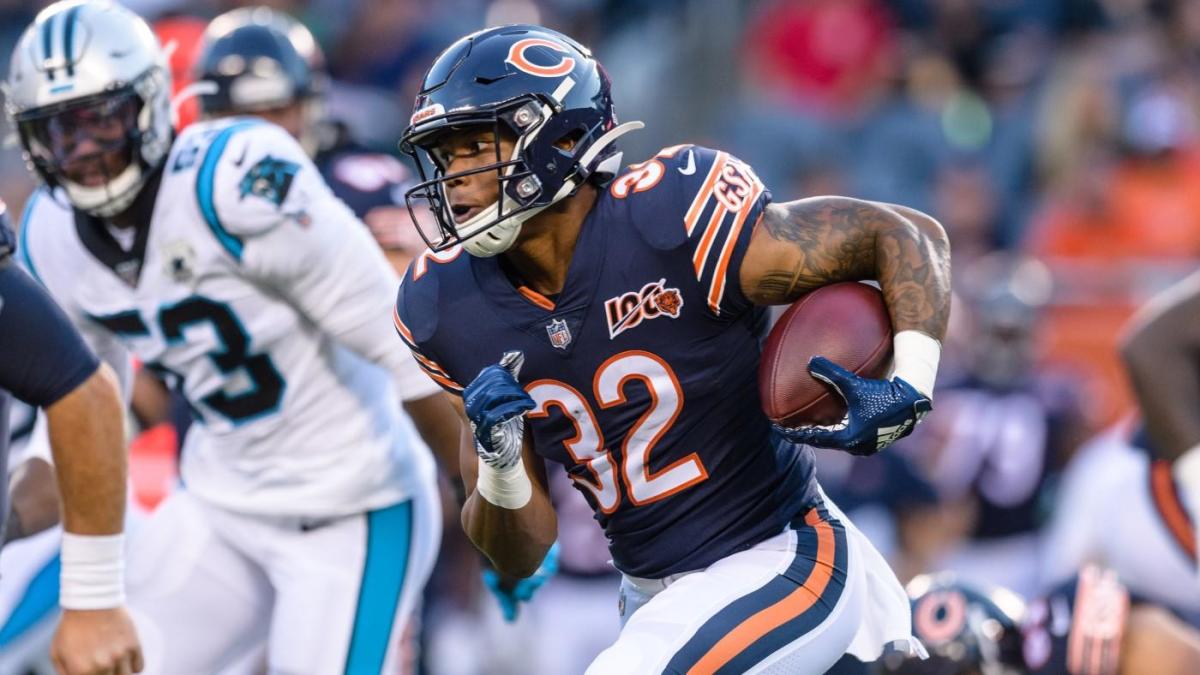 David Montgomery has certainly gotten the touches to succeed, but has slipped into that Adrian Peterson "TD dependent" zone in the 2nd half of 2019. Monty has totaled 107 carries since Week 10 and only produced 370 yards (3.45 YPC) with one touchdown, so he hasn't been anything to write home about. Montgomery is somebody to watch for 2020 as a 2nd year back who should be behind an improved offensive line and potentially a new quarterback, but to close out 2019 at Minnesota, Montgomery isn't a trusted option in your championship. I've got him as an RB3/FLEX option at best.

Both Gus Edwards and Justice Hill are starting fantasy options in Week 17 with Mark Ingram ruled out. Edwards I have as an RB2 and he should be a heavily volume play as the Ravens try to run the clock out on 2019's regular season unscathed before the AFC Playoffs run through M&T Bank Stadium. The Steelers have been pretty good against running backs as the 5th best in the NFL against fantasy running backs. Hill can fill in the gaps and be more of a PPR option, as he caught 3 balls last week. Both figure to work in tandem and I'm confident in Edwards as a volume-heavy RB2, while Hill is a solid PPR flex this week. Since Week 9, A.J. Brown has been WR10 on the season in PPR, something a lot of analysts (myself included) did not predict. Nobody predicted “The Rise of Tannehill” either, but I think we can get a pass for both. A.J. Brown’s talent has really started to shine through for the Titans this season as he’s been the unquestioned WR1. Brown was locked up by Marshon Lattimore and the New Orleans Saints a with 1-34 line but he still found the end-zone on a 49 yard rushing score, netting 15 PPR fantasy points in Week 16. He’ll see the Texans for the second time in the last three weeks, and he torched them for 8-114-1, so in this must-win for the Titans, expect Brown to be a big part of it. He’s my WR9 this week and could certainly flirt with overall WR1 this week. Start with supreme confidence in this Week 17 AFC South showdown.

In what equates to a lost season, Adam Thielen has been hurt often and just not been on the field long enough in 2019 to make a dent in fantasy, aside from taking up space on your bench. The value he had prior to Week 7 was propped up by his 7 touchdowns. He had only one game over 100 yards receiving, and no more than 8 targets in any game this season. He was a ghost last Monday in a must-win game against the Packers, leading me to believe that’s he’s just not feeling right with his hamstring. In Week 17 against the Bears, look for Thielen to play sparingly, if at all. If he’s right, he’ll be needed in the playoffs and not this Sunday as the Vikings’ playoff seeding is already cemented. 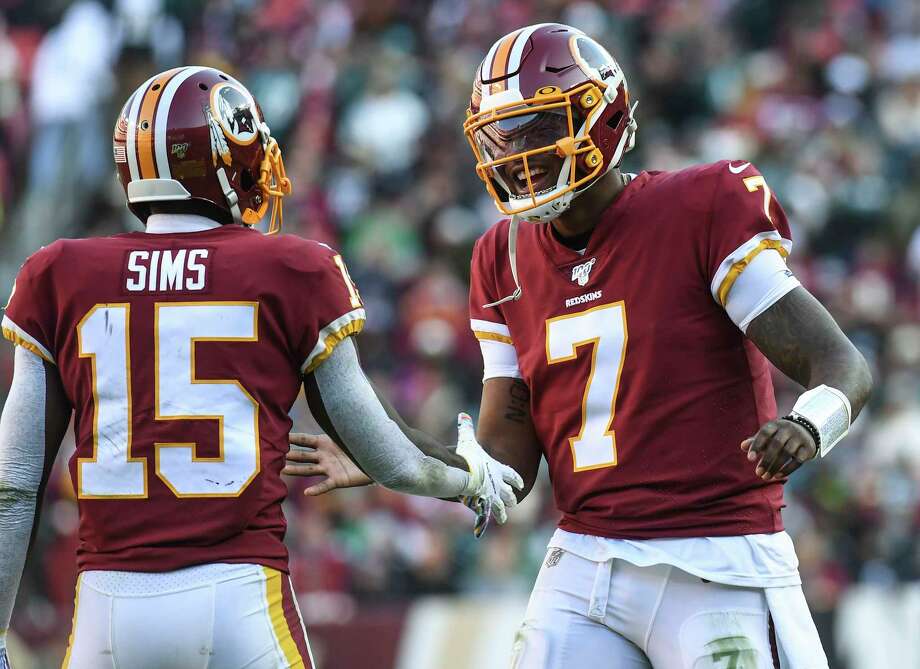 With double-digit targets in Steven Sims’ last two contests with three touchdowns, Sims now gets a Dallas defense that while solid, is beatable. If Terry McLaurin (concussion protocol) can’t suit up for the Redskins, I like Sims as a volume WR3 play here and building on his resume for the offseason. He’s already in some sleeper discussions for 2020 and an exclamation point to his season in Week 17 would only help cement that hype.

Dallas Goedert is a fine tight end start regardless of the pass-catching options (or lack thereof) available to the Philadelphia Eagles, but if Zach Ertz were to miss Week 17 against the Giants with his rib injury, Goedert would vault into a potential top-5 option at the position. He’s been TE10 on the season and turned in his best performance of the season with a 9-91-1 line on 12 targets in a must-win game against the Cowboys. At a position that’s gotten a nice infusion of young talent in 2019, Goedert is an every-week producer and a rock-solid TE1 this final week.

With Mark Andrews seemingly beat up and leaving the game for a period of time in every game (you Andrews owners know exactly what I’m talking about!), Andrews will be happy to play a series or two and take a well-deserved rest for a couple weeks until the playoffs. Most of the Baltimore offensive starts are confirmed to sit, including Lamar Jackson and Mark Ingram, so I wouldn’t be surprised if somebody who has been taking a beating like Andrews follows suit. For fantasy purposes, I wouldn’t depend on Mark Andrews this week even though he got you to this point. A pivot to Hayden Hurst could be a lateral move this week as Robert Griffin and/or Trace McSorley handle the quarterbacking duties with home field advantage already sewn up.

A featured player on the heels of the Will Dissly injury that allowed more playing time, Jacob Hollister had his best stat line of 2019 with 8-62-2 on a season-high 10 targets in Week 10. With the run game in flux after the season-ending injuries to both Chris Carson and C.J. Prosise, Russell Wilson will look to throw more than accustomed to. Last week’s matchup against the Cardinals was a definite anomaly in my opinion, with Wilson not his dynamic self as well as Tyler Lockett and D.K. Metcalf being shut out of the stat column until well into the 3rd quarter. Look for Hollister to have a big say in this monumental matchup that will decide the NFC West and possibly home-field advantage in the NFC playoffs. I like him as a low-end TE1 with some upside.

Again, I just want to thank all of you for your support throughout 2019! If you're playing for your league championship this week, good luck!