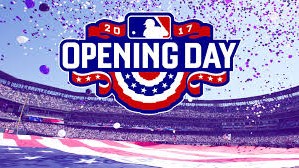 The new Major League Baseball season is upon us in just a matter of hours, so we here at Fighting Chance Fantasy thought we would get our crystal balls out so we can tell you now exactly who will win divisions, playoff rounds, the World Series, and postseason awards. Baahahahahaha, I almost kept a straight face there for a second. As if we think that we can see into the future! Or have crystal balls!  We only have unused ones. But anyway. What do you think is going to happen this year? Give us your predictions in the comment section, and we can have fun with this in September when we see just how right Ryan is, and how Steve is just dumb. Here are your predictions for the 2017 MLB season. Oh, and we don't have the tech savvy to just make our picks be the little logos and make them small enough and fit perfectly like some of the big sites. So you are going to have to read words. Sorry, our bad. It is a really talented group of young hitters in Houston, and Steve sees it being enough to win the division title! One of the littlest men on the field is one of the biggest producers, and Steve sees an MVP Award in his future

Cy Young Award (Not Named Clayton Kershaw in the NL) I don't know about the hair, but I know Syndergaard might be the best pitcher in baseball this year!

Rookie Of The Year Award

Comeback Player of the Year Award