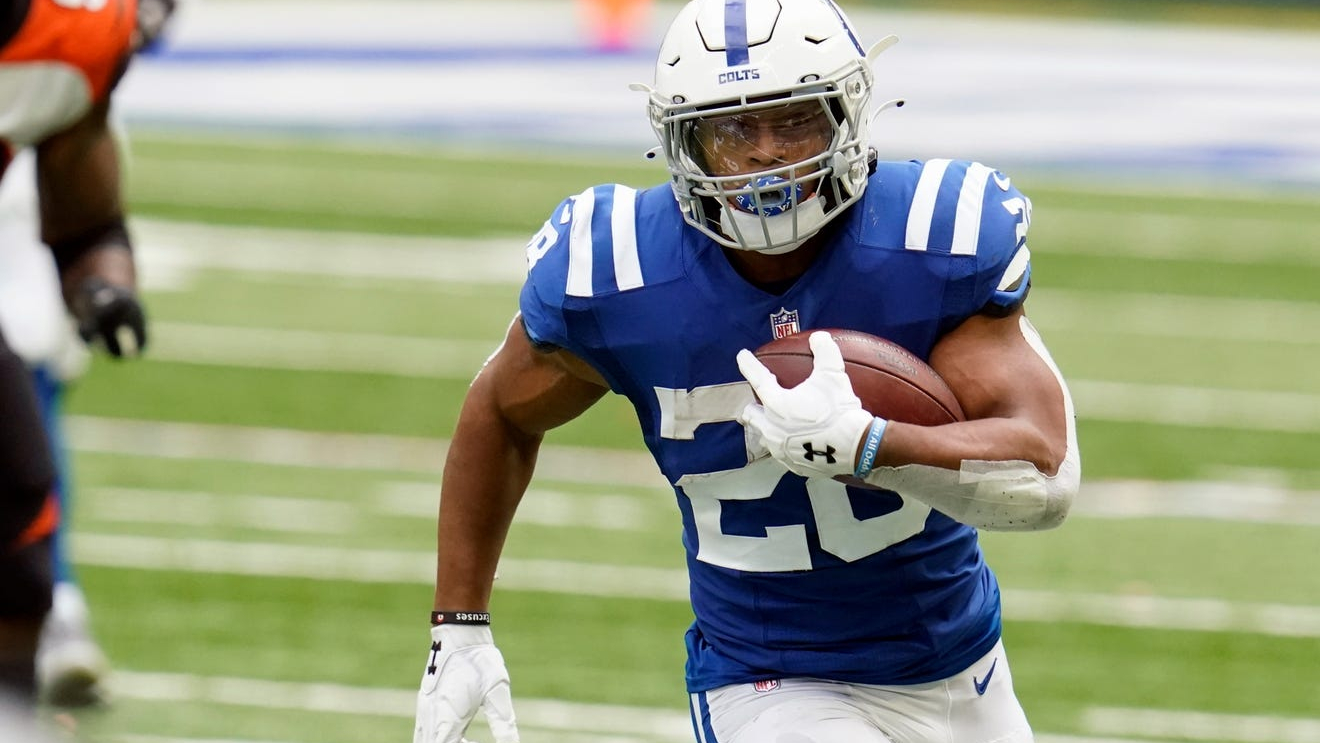 After a massive MLB trade deadline at the end of July, what else better to do than switch gears and dig into some fantasy football data. Admittedly, in the past, I faded some efficient players, most notably A.J. Brown (yikes). But, if I've learned anything from life, we must learn from our mistakes and failures to push forward.

By now, savvy fantasy managers know that specific metrics could regress, but the comment by Scott Pianowski rings true in stating - regress to what. That said, let's look at a few metrics involving efficiency or lack thereof.

For running backs, we look at the Expected Points Added (EPA) Per Carry. That indicates a running back's efficiency with their carries. The points added refers to real-life points and not fantasy points. Then, we'll compare their EPA Per Carry with carries inside the 10. Those carries inside the 10-yard line can lead to high-value touches. In turn, the high-value opportunities lead to potential scoring opportunities.

Top-12 Running Backs With Carries Inside the 10-Yard Line

Many of the top running backs led the league in carries inside the ten last season, including 2021 first-round picks such as Dalvin Cook, Derrick Henry, Alvin Kamara, Ezekiel Elliot, and Jonathan Taylor. I included the average team run plays per game and Pace of Play to show us whether some teams relied heavily on the run or where they sat in Pace of Play.

Last season, the median Pace of Play sat at 2.25 plays per minute. Any number higher than 2.25 indicates that the team ranked in the top half of the league. More plays per minute can mean more opportunities for the team's offense.

Josh Jacobs and Kenyan Drake tied for the league lead last season stood out since they both landed on the same team in 2021. The Raiders and Cardinals used Jacobs and Drake often in the rushing game, yet both finished with a negative EPA per carry. That makes sense given Jacobs' 4.3 (No. 53) Yards Per Touch, -13.6 (No. 61) Production Premium, and 56.1 (No. 72) Run Blocking Efficiency. All that means Jacobs didn't provide efficient production in 2020.

Kenyan Drake finished with similar efficiency metrics that included a 4.1 (No. 57) Yards Per Touch, -16.3 (No. 68) Production Premium, and 78.7 (No. 34) Run Blocking Efficiency. Both Drake and Jacobs showed the ability to produce with the pass-catching ability leaning towards Drake, not including 2020.

Will Jacobs lead the backfield touches with Drake chipping in with the receiving game? That seems like the logical option. However, if Drake flashes, it could eat into Jacobs' opportunities.

Initially, I thought we would include the bottom-12 running backs with carries inside the 10-yard line. However, we find several running backs that didn't seem fantasy-relevant. So instead of stopping with an arbitrary cutoff, we will look at top-12 running backs in EPA per carry next.

With this group, I removed several running backs since some ranked highly in EPA per carry. However, many barely touched the ball last season. We're extending to the top-12 running backs since Jonathan Taylor and Chris Carson sneak in there. We removed running backs with fewer than 30 carries in 2020 to weed out some noise.

We find several running backs that ranked highly in other efficiency metrics, including J.K. Dobbins, Gus Edwards, Nick Chubb, and Aaron Jones. With the top rushing offense in Team Run Plays Per Game, Dobbins ranked 3rd with 6.1 yards per touch, 9th with +21.8 Production Premium, and 5th with a 92.2 Run Blocking Efficiency. Unsurprisingly, Edwards ranked highly with a 5.6 (No. 8) yards per touch and 88.5 (No. 13) Run Blocking Efficiency yet only +3.0 (No. 31) Production Premium.

Meanwhile, Aaron Jones has Christian McCaffrey-type upside within his range of outcomes given the rushing efficiency and pass-catching ability. Jones averaged 5.9 (No. 4) yards per touch with a +22.1 (No. 8) Production Premium. Like Chubb, Jones created yards on his own, evidenced by 354 (No. 9) Yards Created yet only a 22.3% (No. 25) Juke Rate. However, Jones should continue to provide efficient production with his 217.9 (No. 9) Weighted Opportunities that we love to see with PPR running backs.

Jonathan Taylor heads into 2021 with a ton of helium. Last season, Taylor was efficient as a runner with a high amount of carries inside the ten. He ranked 7th with 25 carries inside the ten-yard line and showed efficient production in the rushing and the receiving game. Taylor earned 203.6 (No. 11) Weighted Opportunities and averaged 5.5 (No. 14) yards per touch. Amongst running backs, Taylor ranked 8th with 1.57 yards per route run and 6th with 8.3 yards per reception. 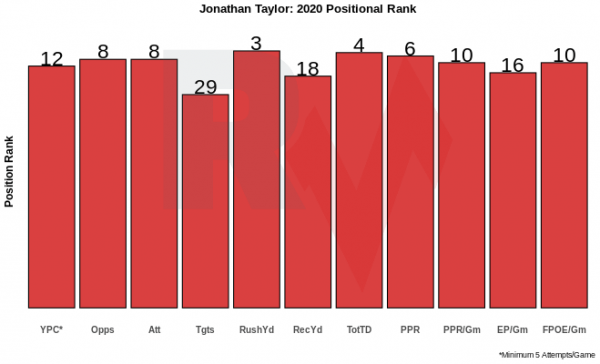 Sure the questions surround Nyheim Hines taking away pass-catching opportunities with his 14.4% (No. 7) target share. Then Marlon Mack returning from his Achilles tendon injury, possibly taking some of the rushing opportunities. However, what if Taylor's 8.3% (No. 30) target share increases with the continued efficient receiving production? Add that with the talent and efficient rushing production, and Taylor's upside makes him worth it at his round one ADP of 9.7 on Underdog as RB7.

Another way to look at this for Jonathan Taylor is using the RotoViz tools. Taylor ranked No. 8 with 36.5 rushing fantasy points over expectation (ruFPOE). Amongst running backs that led the league in ruFPOE, the only backs with a higher receiving FPOE (reFPOE) included Alvin Kamara and Dalvin Cook. If Taylor's receiving efficiency improves, which it likely could, then Taylor could have a career-best season in year two.

So What's All This Mean?

For EPA per carry, it's another way to look at efficiency for running backs. However, it brings in the component of how real-life points a player contributes on their rushing offense. Thanks to Josh Larky for helping me understand this metric a bit better. Many of the backs that sit atop the leaderboard in EPA per carry make sense considering players that provide efficient rushing production.

With the carries inside the ten, it shows us which running backs earn those high-value touches. However, running backs that finish with more opportunities probably ranks highly in those touches. Sometimes, we have backs like Josh Jacobs and Kenyan Drake that received a higher rushing volume yet struggled with rushing efficiency. It's trickier with both Jacobs and Drake on the same team since they both likely won't earn 30+ carries inside the ten in 2021. If a running back finished with a low EPA per carry yet received high-value touches, it could indicate some positive regression assuming similar opportunities.