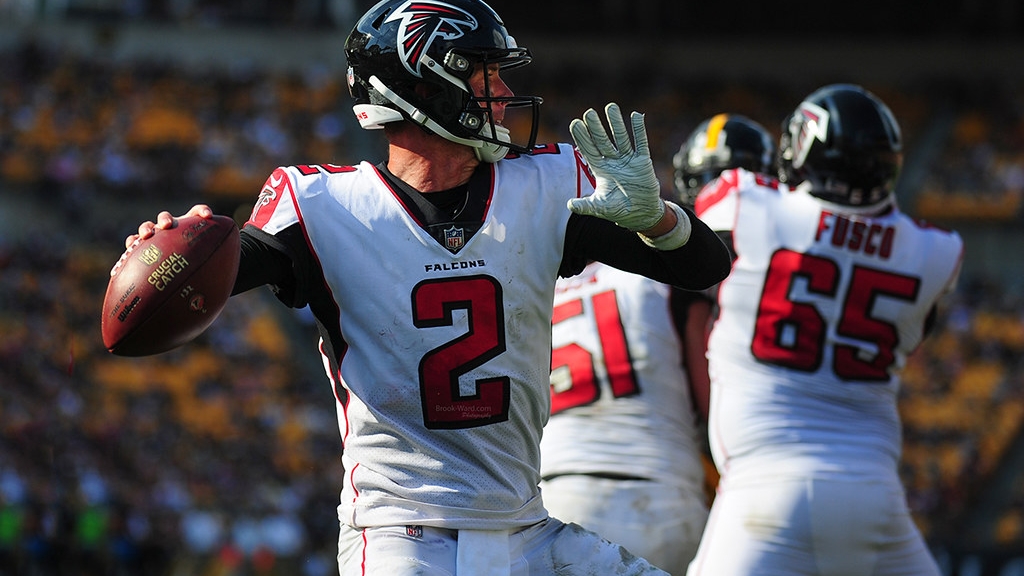 Did Matt Ryan lose you a fantasy matchup in 2019? Did you miss out on a playoff spot due to Ryan’s single-digit fantasy points in Week 12? Did he cost you the championship belt when he threw two interceptions in Week 16? Did you swear to yourself that Matt Ryan would be on the top of your ‘Do Not Draft’ list for 2020? Here’s why I believe Matt Ryan deserves a second chance in 2020.

The NFC South will be headlined this year by the Drew Brees versus Tom Brady showdown, but Matt Ryan could find himself under center in multiple shootouts against some high-powered offenses. The Falcons have stumbled since their Super Bowl loss in 2016, making the playoffs just once since, in 2017. They finished 2019 with a disappointing 7-9 record after starting the season 1-7 before their bye. Although he finished 2019 as the overall fantasy QB11, and technically a QB1, it was a disappointing finish after ending the 2018 season as the QB2. To understand Matt Ryan’s boom or bust tendencies I dove into the data to determine his inconsistency and predict his 2020 season.

First, I looked at the offensive line and defensive rankings from 2015-2019 to see if their rankings fluctuate similarly to Ryan’s rankings.

His offensive line has stayed fairly consistent over the same time frame. According to Pro Football Reference, the offensive line ranked 15th, 10th, 8th, 24th, and 24th in run blocking from 2015-2019 and 9th, 23rd, 8th, 14th, and 13th in pass protection over the same time frame. On the other side of the ball, the Falcons defense finished 14th, 27th, 8th, 25th, and 23rd from 2015-2019. Ryan’s fantasy quarterback finish and the defensive ranking are inversely correlated over this sample size. This makes sense: the worse a defense is, the more points the offense needs to score to win games. These numbers are summarized in the chart below. As you can see, Ryan’s finishes vary each year. Although his pass protection and defense are not fantastic each year, they do not seem like indicators of Ryan’s performance. 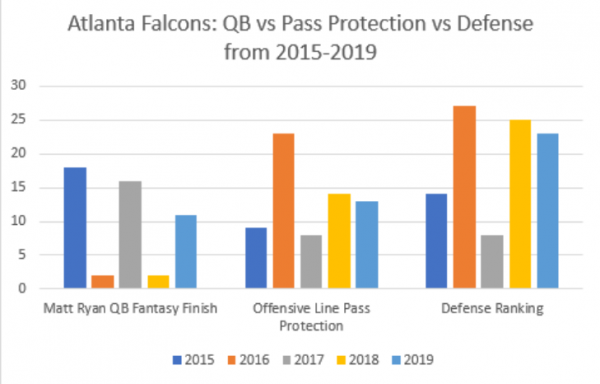 Second, I researched if the individual offensive skill players on the Falcons showed the same fantasy boom or bust characteristics.

Overall, the answer is no. Despite Ryan’s inconsistent fantasy finishes, a fantasy manager should be pleased if they have the other Falcon’s offensive players on their team. Julio Jones has finished as a fantasy WR1 throughout the previous five years and the top running back for Atlanta has finished as at least an RB2 each of the last five years. The top running back was Devonta Freeman in 2015, 2016, 2017, and 2019 and Tevin Coleman in 2018 when Freeman was sidelined with an injury.

Third, I dove deeper into a quarterbacks numbers to see if any statistics directly correlate to Ryan’s fantasy finishes.

It seems one of the only obvious indicators of Ryan’s fantasy finish is his number of touchdowns, number of interceptions, and his quarterback ranking. These statistical categories, which directly correlate to his fantasy finish over the last five years, are compiled in the chart below. For 2016 and 2018, when he finished as the fantasy QB2, he threw less than 10 total interceptions. In those same years, he also threw more than 30 touchdowns. 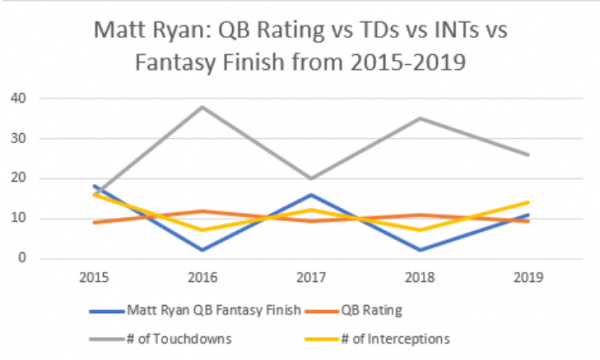 Ryan could find himself in high-scoring shootout games this season, against the Packers, Chiefs, Buccaneers, Saints, and Seahawks. Due to this, Ryan’s total interception numbers could increase. Although this would seem to correlate with a QB2 fantasy finish, according to The Football Database, Ryan has finished in the top 20 of quarterback interception percentage each year for the past four years and only dropped to 25th in 2015. He finished in the top seven in 2016 and 2018 when he was the QB2. Based on this, despite a potential uptick in interceptions, the number of touchdowns is the bigger driver in predicting his fantasy finish.

In conclusion, Ryan will still have Julio Jones for deep passes down the field and many expect the team’s secondary receiver Calvin Ridley to take a step forward this year which could help increase Ryan’s touchdown totals. Although it is tough to predict game script before the season starts, I expect Ryan will have the ball in his hands a lot this season looking to throw the ball. At his current ESPN ADP in the eighth round, I will be drafting Ryan for 2020 and hoping the trend continues leading to a high QB1 fantasy finish.

Are there other players that are on the top of your “Do Not Draft” list? Let me know on Twitter @thebyeweekff. I’ll breakdown which players deserve a second chance.