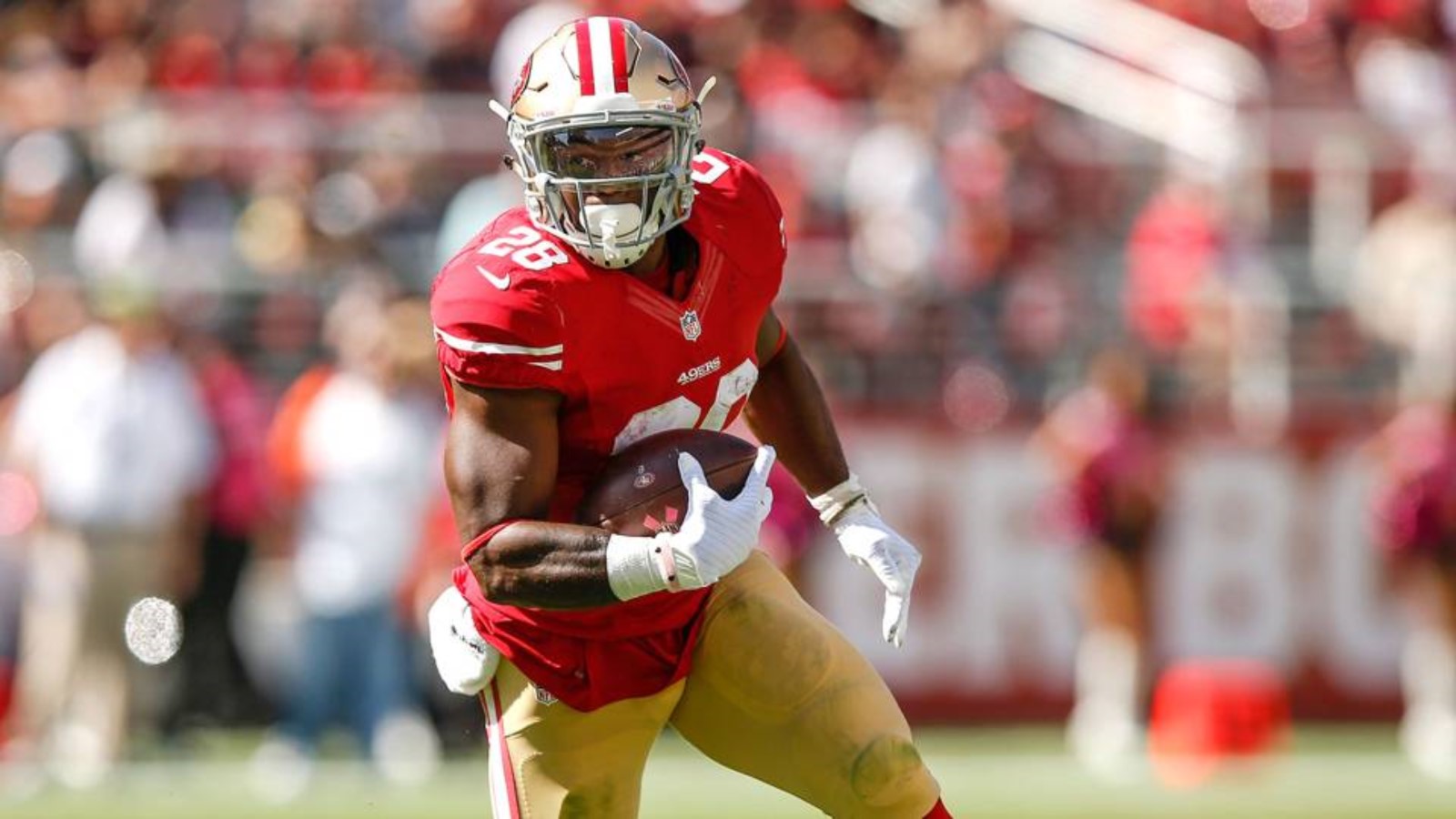 Carlos Hyde or Nick Chubb? Which is the better Mid-Round Value?

One of the things I truly love about Twitter is all the discussions you can get into with others that are as fanatical about this game we love as I am. This was one of the reasons I started doing the Twitter / Facebook question of the day.

Hopefully it shows some that the players they are thinking about are also being put in a positive light by others or in some instances that maybe they are right to stay away from certain players. Also maybe it gets some more discussions going, which at this time of the year is important for all of us.

So let’s get some discussions going with today’s Twitter Question of the Day.

Which middle round (Rds 7-12) non-QB do you want on all your teams and why?

@ShanePHallam - Trey Burton. Has athletic talent and is in a TE heavy system. If he is used like Travis Kelce, he should eat plenty of targets (including in the red zone,) and end up a steal.

@fantasytillman - Randall Cobb because Aaron Rodgers is healthy and Jordy Nelson is gone. As long as Cobb gets the walking boot off before OTAs.

@MichaelGreen311 – Marshawn Lynch- he's a steal at his current ADP and the teams where I start RB/WR, WR/WR need a solid RB2 and I don't know why he can't be that guy.

@BigBru228 - Rex Burkhead. Pats have a high scoring offense & are at the top for many years from running inside the 5 for TD's. Burkhead will be the goaline back besides his other touches. If Sony Michel fumbles a couple times then Rex's worth goes even higher.

Jason Duvall - Vance McDonald - Pitt has favorable schedule which I'd reasonably assume could lead to some higher scoring. No doubt AB and Bell get theirs, but with no Martavis Bryant and a rookie replacement could possibly leave some production for the TE. Not saying he's going to be the nuts at TE this year, just that we already have a lacking field of options at the TE position and McDonald has some upside. For the price, I'll take the risk on him.

@fantasygeek37 - I am finding myself with a ton of Corey Davis so far in mocks. Should be healthy this year, has the physical abilities to be a WR1 and I think Matt Lafleur will do wonders for that offense. Bye bye exotic smash mouth!!!

Scott Atkins - Great question!  Pierre Garcon for me. Jimmy G is going to put up numbers and you're getting a solid value for a guy that is capable of putting up WR1 numbers. I do like Goodwin as well, who also has value around this spot.

@MisterSkoch - Randall Cobb. The #2 for a healthy Rodgers is going too cheap. Pierre Garcon as well. Dude catches everything.

Mark Spafford - Rex Burkhead, The Pats love to run the ball in the red zone. And rookie Rb's need to earn the trust of the coaching staff./// Mark Ingram, Hoping the 4 game suspension gives us Kamara lovers a cheaper handcuff./// Pierre Garcon, Kyle Shanahan's offense in 2013 Garcon caught 113 balls./// Devante Parker, Could this be the year we were looking for last year? More opportunity this year./// Cole Beasley,, Hurns is there but veteran receivers tend to underperform there the first year on a new team. Prescott seems to have a rapport with him, especially with Witten gone. If you are in a 20 round Vegas league, then why not take a flyer./// Kyle Rudolph, With a John Defilippo run offense, look at Philly the last 2 years, that favors the TE, Plus we all know Kirk Cousins loves to target his TE.

@AJStans23 - Aaron Jones. Jones was a huge value before the suspension and he'll be a bigger one now. Jamaal Williams' 3.6 ypc will be on display weeks 1 & 2 and Green Bay will quickly plug Jones back in Week 3.

Michael Nissen- Nick Chubb. Love his talent. He's a better talent than Carlos Hyde. He's a north and south runner with some wiggle in the gaps. I think his situation mirrors Dalvin Cook from last year. They brought in the veteran, drafted the rookie and they have a third down / receiving back It just reminds me of the Cook, Murray and McKinnon situation.

@Dismattle - Nick Chubb is a nice flex who could become a must start.

@CaptainKohana - A guy I like in those middle rounds is Jamison Crowder. I think he's the perfect target monster for Alex Smith as he creates tons of separation and thrives on the quick-hitters. I am drafting him everywhere.

@rgonzalezrm – Chris Hogan. He’s going to have more chemistry with Brady then all the other receivers with Edelman suspension.

As you can see there are a lot of good names on this list and some responders just couldn’t keep themselves to only one name. Yes I’m talking about you Mark and @ChiRuxinIDP, lol. Those two are correct though as there are numerous players in this draft range that will provide positive results and quite possibly win some championships.

Most of the names listed are names that I look for in drafts, well except for maybe one: Vance McDonald. Sorry Jason I am just not buying there. In his five years in the league he has never had more than 30 receptions and has never topped 400 yards. Pittsburgh did trade for him last season, but he still only ended up with 14 receptions, while missing four games to injury.

If I keep myself to only one name then I have to go with one name that was not mentioned by anyone here. As I said before most of these names are players that I do indeed like, but I am going to go with Duke Johnson.

I will let others quibble over whether or not rookie Nick Chubb will beat out newly-paid Carlos Hyde, but ultimately I see them both hurting each other over the season. Johnson is just a playmaker with the ball in his hands and I don’t see the Browns getting away from him.

In his three seasons he has averaged over 62 receptions and 580 receiving yards a season. In 2017 he also scored seven times which propelled him to finish as RB 14 in ppr leagues. He was fourth in RB targets with 93, trailing only Christian McCaffrey, Le’Veon Bell and Alvin Kamara.

According to the Fantasy Championship ADP he is coming off the board as the 36th RB taken and this represents amazing value to me. While he may lose a few receptions to Hyde and newly acquired Jarvis Landry I believe his overall numbers will come quite close to his 2017 numbers and he will be a steal at the end of the seventh round.