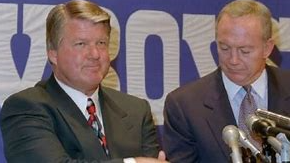 Drafting Like a Pro, Not a Joe (or a Jerry)

Fantasy football draft season will be upon us soon.  Now is the time to re-evaluate your drafting abilities.  This is something I do every off-season around this time.

For the past several years, I have been competing in mid and high stakes season-long tournaments.  Many draft rooms I enter are filled with players that will draft twenty or more teams in a season.  Those drafters are typically investing over $3,000 in teams - some investing $20,000 or more.

I have had a fair amount of success winning, over $55,000 since 2013.  Most people immediately assume my success comes from a magic formula that I use for projections.  Projections are an important component, but another huge component is knowing how to draft.

The draft is only one component of fantasy football, but the better you are at it, the better every other phase works.  Waivers are important, but I don't subscribe to the theory that "waivers are where it is at in re-draft."

The better your draft goes, the more clarity you have when it comes to waivers and trades because you won't be making decisions from a position of weakness.  The only potential downside is having to make tough starting lineup decisions, but that is a good place to be!

Today I am going to share some insights that will help you understand how good of a drafter you are.  Many of these things I have learned by studying top players and assimilated them into my approach.  Some I have developed myself by working through this process each off-season and thinking about what worked and didn't work.

Once you understand where you currently sit on this spectrum, you can begin the process of taking steps to improve so you can draft more like a Pro and less like a Joe.

This level is the equivalent of knowing what hand you are holding in poker.  You must understand draft position heading into a draft and having a flexible draft plan ready to go.  Here are some questions to consider.

- Do you fully understand your league scoring rules and starting requirements?

- Have you adapted your projections accordingly?

- Are you using numerical rankings or well-vetted tiers?

- Do you have a strong sense for average draft position (ADP)?

- Do you have all of your information organized into a concise format that allows you to focus?

- Have you participated in mock drafts?

- Do you feel confident and relaxed entering your draft?

If you answered no to the last question, it is likely you are unprepared.  If unorganized you are likely to make mistakes because your brain is wasting precious resources searching for info versus processing the info it has to make good decisions.

If you are using rankings based on points instead of tiers, I highly recommend switching.  One of the biggest values of tiers is going through the process of grouping players.  It forces you to decide which players you truly believe are equal versus which ones are not and why.

Don't just base your tiers on where points drop dramatically - many other things go into tiers such as consistency, floor, upside, etc. and you want to group those players accordingly.  It will be a key driver to roster construction, which I will discuss later.

If you aren't paying attention to ADP and doing a few mocks before your draft, you are showing up to the test without studying or practicing.  That is never a good recipe and often leads to bad decision making.

Back to the poker analogy - if you are holding two aces, you feel great about your starting chances.  Being prepared and relaxed is like holding pocket aces.  It can still go awry, but you are off to a strong start.

This level is the equivalent of knowing your opponent's hand in poker.  Fortunately, this is much easier in a fantasy football draft.  As the draft unfolds, you should know the strengths and needs of every other team in the draft.

This is critical because it allows you to begin calculating the odds of player "A" sliding back to you if you take player "B" now.  Essentially you are counting the number of teams with a need versus players remaining in your tier.

For example, I need a TE, and there are two remaining in my target tier, but there is a WR who I love as my WR3 and only two remain in my tier.  Once I pick there will be six picks (three teams) until I draft again.  All three of those teams still need another receiver, but two of them have a TE already.  I take the WR because my likelihood of getting both players is at its highest.

Most online draft sites have a draft board that updates with each pick that you can view.  Most sites that home leagues run through have this feature too if your league doesn't set up a physical draft board.

Utilizing these tips will help you integrate short-term strategies that will keep you ahead of your league mates on a round-to-round basis.  This is key to maximizing your roster construction with more good player combinations.

First of all, never submit to a single draft strategy that you use every year.  There are years where I love "upside down" or "zero running back" drafting, but there are also years where I don't.  Heck, for different drafts in the same year it may change based on how value is falling.

Trying to force a draft strategy just for the sake of it is not a good long-term approach.

Instead, based on your tiers and ADP understanding you are going to create a list of players from round six and on that are undervalued, or provide significant upside.  Each year that list will be made up of a different mix of positions.  Once you do this, you are going to break these players into two groups:  Upside and Floor.

Your list will be longer, but when you have completed this task you will have something that looks like this: 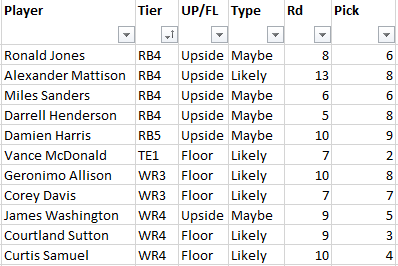 Notice I not only have an "upside" versus "floor" column, but I also add a column for how good I feel about that player.  "Maybe" are players I don't want to depend on if I need of a starter, but I love them for upside.

Now that I have been doing this for years I don't create a separate list - I denote these players with a bold font on my draft board.  Early on, I recommend going through the exercise though because like creating tiers, it makes you think through who belongs on the list.

Now that you have this list you are equipped to create your long-term (multi-round or big picture) draft strategy.

If your list is full of "upside" players that are a "maybe" in later rounds, you will want to stay more conservative in rounds four and five.

If there are multiple floor or upside players "likely" to gain the production, then you can be more aggressive and swing for upside in earlier rounds when it makes sense.

As the draft unfolds, you can adapt your three to four round strategy accordingly using this information.

Using the example above I may weight RB more than WR this year early on because of the unknowns on my list as well as question marks on round three and four guys.

However, if you want to play it super aggressive, you could take three great WRs and then swing for the fences at RB a few times from round 6 to round 13.

The best approach is a balanced one integrating high reward players along with some safe floor contributors in later rounds.  I have witnessed so many fantasy players take one extreme or the other.  I have watched upside teams flame out early in the season as they wait for upside and I have watched overly conservative drafters finish middle of the pack with no playoff punch.

Many of them didn't even do it by choice; it just happened.  Why?  They didn't have a strong multi-round strategy.

I deployed this strategy in our Fighting Chance Fantasy mock draft last week.  This was a 1 QB, 2 RB, 3 WR, 1 TE, 1 FLEX full PPR setup.  I had pick four.

My strategy was to secure three top-notch receivers given scarcity because everyone has to start three.  Knowing I could get a floor RB like James White or Kenyan Drake in the 5th (I know they are not on my semi-fake list above) and then grab upside in the 6th with a guy like Miles Sanders was a key to my strategy.

However, I couldn't deploy this strategy rationally unless I had other options I could take later to fill my flex position early on - as of today I don't want to start Miles Sanders on week one.

How did I know I wouldn't jeopardize my flex position week one?  Because I have Geronimo Allison, Courtland Sutton, and Curtis Samuel sitting in my back pocket knowing I will target one of them a round early in the 8th and have complete flexibility in the 9th.

This strategy also kept my 7th rounder open for my TE target - Vance McDonald.  Noticed that I passed McDonald in round six.  Why?  Because KaceyKasem and DrakeFantasy both already had TEs.  I also like Evan Engram who lasted longer than normal, so there were two TEs left and only GHaddow still needed one.  This is a Level II move.

Based on my heavy investment in receivers early, I also needed to pounce on additional RB depth and upside in the later rounds, which are guys from the list above in Mattison and Harris. 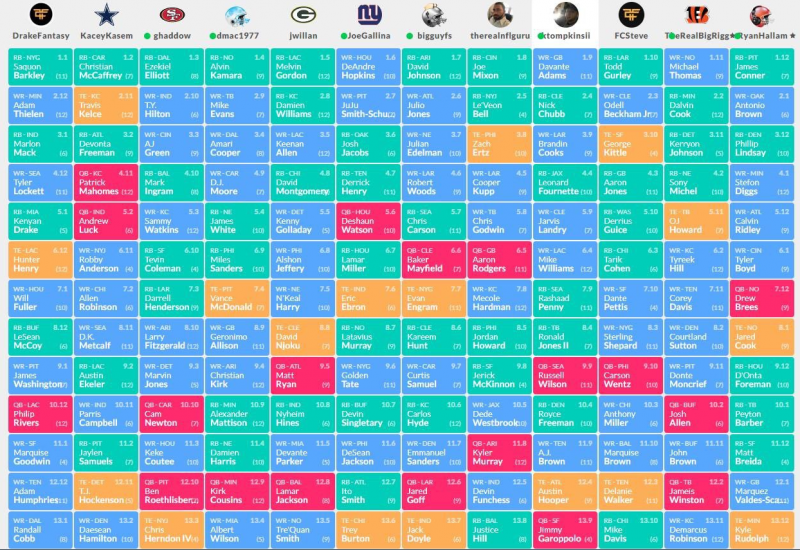 Where do you sit on the spectrum?  Are you Level I?  Level II?  Level III?  You may be a mix.  Wherever you sit, just don't stay still - utilize this information to refine your draft skills.

Get organized.  Sharpen your round-to-round strategy. Hone your bigger strategy by thinking multiple rounds ahead of your opponents.  Now, go do some mock drafts and get comfortable with different roster construction options - there will be no stopping you come draft day.