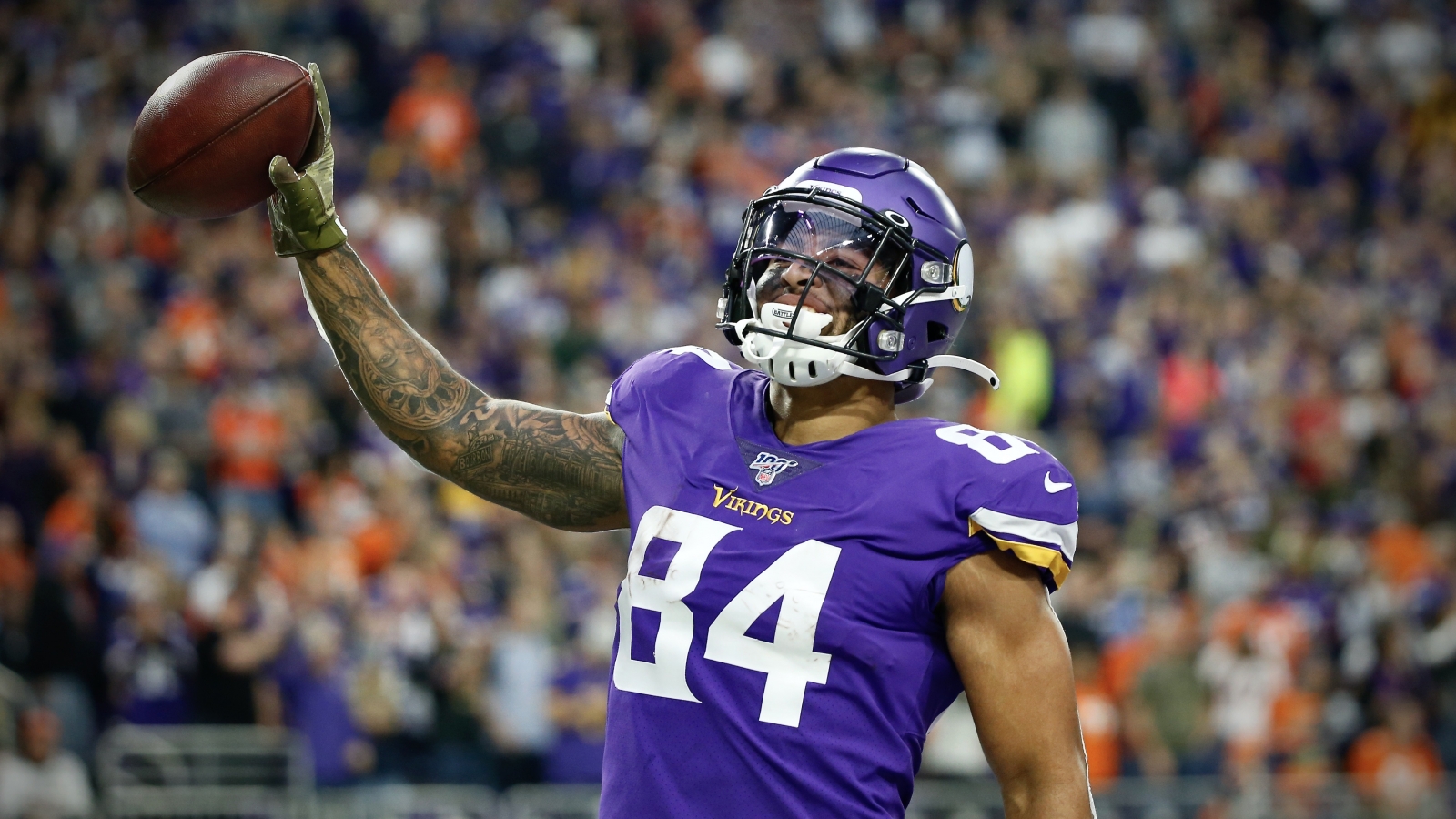 Learning about and drafting rookies for your squad is one of the most exciting times in the offseason. We’re talking about dynasty after all, and the young guys are the pipeline to your future success (or misery). However, we’re at the point in the offseason where most rookie drafts have taken place and dynasty players are now afflicted with “rookie fever”. Rookie fever, for those who don’t know, is the time of the year where dynasty players are enamored with their first-year players and have the highest of expectations for them. An unintended side effect of this is a decline in the value of second-year players who did not quite meet expectations during their rookie years. What’s interesting is that these players went through the same process about a year ago, and after one season of not meeting high expectations, can now be acquired for a much cheaper price than before they played an NFL snap. The following are some of these second-year players that I’m actively targeting, whether that’s in startup drafts or in trades, due to the noticeable decline in valuation.

Parris was being drafted as a late first-round pick in rookie drafts just a year ago as the versatile speedster landed on a team with little competition for targets outside of T.Y. Hilton. Unfortunately, Parris had an injury-laden rookie year as he endured a sports hernia, a broken hand, a fractured foot, and a hamstring injury. Somehow, he still managed to play 7 games and gathered 18 receptions for 127 yards and 1 TD. This isn’t an inspiring stat line, but as a rookie battling four different injuries throughout the year and below-average QB play, this is a lot more impressive. There’s a reason for optimism with Parris as the Colts love him and have big plans for him. IND WRs coach Mike Groh says Parris is a “threat on all levels” in an interview with Colts.com. Parris is highly skilled in a lot of areas, and the Colts seem excited to have him back fully healthy. This year, there is more competition for snaps and targets as the Colts added Michael Pittman in the NFL draft, but Parris has similar draft capital (both 2nd rounders) and is too skilled to leave on the bench, which the Colts’ coaches appear to know.

Dynasty players are skeptical because of his injury-ridden rookie year, and it’s a perfect opportunity to add a young, skillful receiver with WR2 potential for your team at a low cost as he’s currently going 134th overall in startup drafts. For those past their startup draft, Parris can be acquired for a 2021 2nd round rookie pick or less, and he would be well worth it.

Rookie tight ends rarely produce enough to have a significant fantasy impact, and Irv Smith was no exception. He finished 2019 as TE33 with 47 receptions for 311 yards and 2 TDs, which is not bad for a rookie but not helpful for fantasy purposes. Expectedly, he is not being highly drafted in dynasty startups this year. He’s currently being taken as TE15, 120th overall. I believe he will surpass his draft status and be a consistent TE1 going forward because of his talent and how he’ll be used in the Vikings offense.

Let’s look at his involvement in the offense throughout his rookie year: 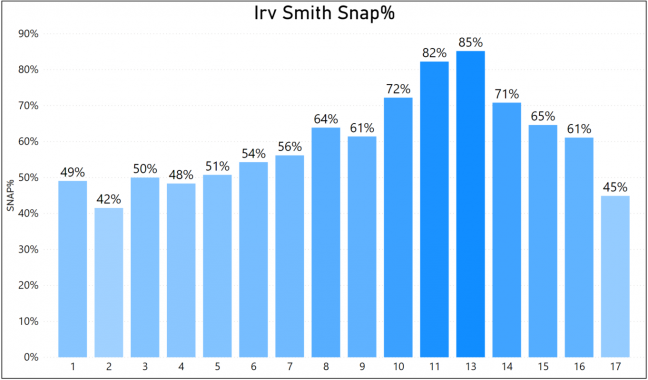 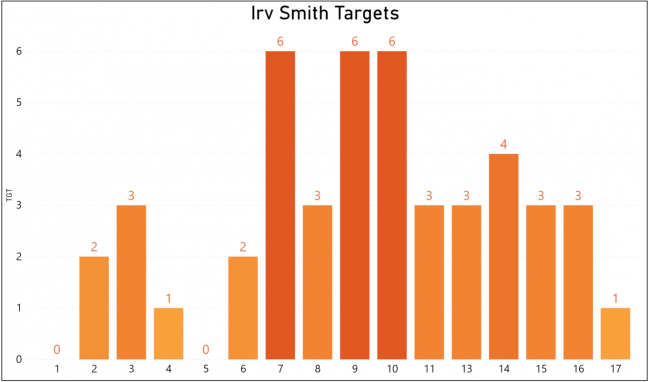 As shown above, Irv’s snap percentage and targets all generally increased as the season progressed, meaning the Vikings were getting him more involved as he learned and earned trust. Starting week 8, Irv played 60% or more of snaps in 8 of 9 games. Along with this, he was allowed more opportunities to earn targets as well. Looking ahead, Rudolph is not getting younger, and Irv now knows what it takes to succeed at the next level.

One last important factor to note is that Kevin Stefanski moved on to Cleveland, leaving Gary Kubiak to run the offense. Historically, Kubiak’s offense has been more pass-heavy than Stefanski’s run-heavy offense. Along with this, Stefon Diggs has taken his 100+ targets and moved on to Buffalo. Taking these factors into account, I expect Irv’s snaps, routes, and targets to increase even more this coming season, which should lead to nice bumps in receptions, yards, and most importantly fantasy points.

If you have a startup draft coming up and like to wait on TE like me, add Irv Smith to the top of your list for the later rounds, and if you’re past the startup, offer a 2021 2nd round pick for Irv. If you can add a dynamic, young TE with top 12 upside to your team for an asset with no guaranteed return, jump all over that.

Hear me out before judging this one. Renfrow is not necessarily a game-changing WR, and he doesn’t need to be to have value for your team. As a rookie, he finished as WR54 while missing 3 games due to injury. His ppg average would have put him at WR41 if he played all 16 games. This year, he’s being drafted as the WR76, 179th overall. If he does exactly what he did as a rookie, he’s a HUGE value, and it’s likely he’ll be better than that.

Let’s start by looking at Renfrow’s fantasy ppg by week in PPR leagues. 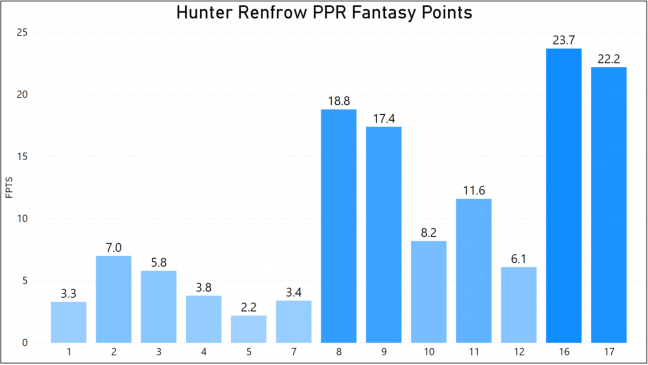 Weeks 1-7 were less-than-stellar as he scored 7 or fewer points every week. This is not too worrisome as all rookies have a learning curve to get through. Starting week 8, Renfrow turned it on scoring 17 or more points in 4 of his last 7 games, meanwhile gaining the trust of Derek Carr which can be seen in Renfrow’s targets by game. 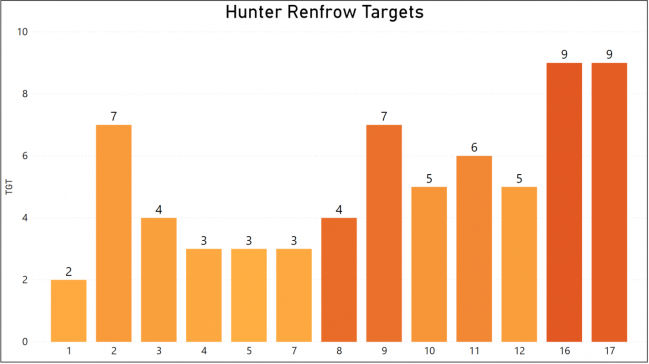 Carr started feeding his newly trusted slot man in the back half of the season, leading to 5+ targets and at least 15% target share from week 9 on. I expect this established connection to continue even with the addition of two new rookie WRs (3 if you count Lynn Bowden) as rookies take time to get up to speed and are not guaranteed to produce. Additionally, there is no added competition for the slot role, which is where Renfrow thrives.

As Carr’s now trusted slot receiver, expect Renfrow to outperform his rookie year and his insanely low ADP, 179th overall, this year. He has WR3/Flex appeal in PPR formats, and the best thing is, Renfrow might even be on your waivers right now, depending on league size. If not, test the waters with the current owner, he can be had for a very low price. I’d suggest starting with a 2021 3rd round rookie pick + an end of bench player.

*ADP is for Dynasty leagues and is from DLF