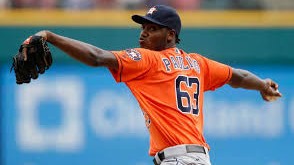 Here we are looking at yet another close match in your fantasy baseball league. Your team needs a win to stay in first, is middle of the pack, or is desperate for a win. It doesn’t matter the situation, you want that W come Sunday night! As always we look to pick up a starting pitcher or two over the weekend to put us over the top. Fear not, dear Reader, we have you covered. Below are two choices each for Friday, Saturday, and Sunday that are owned in less than 50% of leagues. And in the spirit of transparency, after the picks from this week you can find my results from last week’s article. Follow me on Twitter @fightingchance. Alex Cobb got rocked on Sunday, but I'm expecting a nice bounceback on Friday

Alex Cobb, Tampa Bay Rays vs. Andrew Triggs (OAK). Cobb was my one huge error last week, but I’m not losing faith in him. Before last week’s disaster, Cobb had at least five strikeouts in four straight starts, and allowed three or fewer runs in six of his previous eight starts. Oakland is a last place team and has scored the second fewest runs in the American League. Triggs has given up five or more runs in two of his last three starts, so I have renewed faith in Cobb.

Joe Biagini, Toronto Blue Jays vs. Sam Gaviglio (SEA). While his strikeout numbers have been kind of inconsistent, Biagini hasn’t given up more than three runs since May 17th, and less than three runs in six of his last nine starts. He has struck out 13 batters in his last 13 innings, although Seattle is a decent offense. Gaviglio hasn’t been bad, but allowed five runs two starts ago and I see this being a good start for Biagini.

Dan Straily, Miami Marlins vs. Trevor Williams (PIT). Straily hasn’t allowed more than three earned runs since May 4th against Tampa Bay, and while I am not a full believer in the guy, I can’t argue with the results. He is striking out just over nine batters per nine innings, and right now you have to ride the wave while he is hot. Pittsburgh has scored the fifth fewest runs in the National League and are a shell of the team they were a couple of years ago. Seems like a great day to start Straily. He's a long way from an exciting week in and week out fantasy pitcher, but in the right matchups Robert Gsellman has nice fantasy value

Robert Gsellman, New York Mets vs. Sean Newcomb (ATL). I’ve picked up Newcomb in a league, and I have faith that he will have a good game and for however long he will be in the Majors. Gsellman has been very solid for the Mets while their rotation has been in shambles, and I think he will continue that. He isn’t a great strikeout pitcher but he doesn’t get blown up and is almost a lock to give you a solid start. Newcomb has a bright future, but in his first Major League start I wouldn’t be surprised to see him be average.

David Paulino, Houston Astros vs. Jesse Chavez (LAA). One of the better pitching prospects in the Astros system, Paulino hasn’t been dominating in his two starts in the Majors, but he has shown signs. The Angels are under .500, and are among the bottom third in the American League in runs scored. Paulino has 12 Ks in 9.2 innings, and hasn’t given up more than three runs in either start. Chavez has allowed 13 earned runs in his last four starts, and is an average pitcher at best. Look for Paulino to dominate the Angels and take the win.

Aaron Nola, Philadelphia Phillies vs. Adam Wainwright (STL). Nola has his ups and downs but so far this year it has been more ups than downs. The Phillies offense isn’t great which makes it hard to get wins, but the Cardinals are on a terrible run of finding ways to lose. Look for Odubel Herrera to continue to hit and to find a way for the Phillies to win the game.