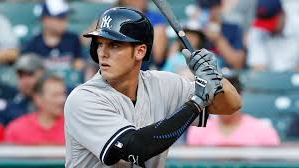 Ealier this week, we brought you our sleepers and busts for the middle infield position, which in case you missed it, you can find it right here. Now it's time to take a peek at first and third base and let you know a few guys that Ryan and myself might invite to the ball, as well as a few players that we will leave home to scrub the floor with Cinderella. Don't be a pumpkin...follow our advice!

Sleeper - Ryan
Greg Bird, New York Yankees. ALL ABOARD!!!!  This is the conductor of the Bird Bandwagon and it pains me to say that, because I hate the Yankees so much. Bird flew onto the fantasy radar in 2015 when he hit 11 home runs in just 46 games for the Yankees at the end of the year. A shoulder injury cost him all of 2016, but he is back and ready to take flight. Yes, I know the Yankees signed Chris Carter, but that was for one year at a minimal salary. They have nothing invested in Carter, and Bird is their future. He has 20-23 home run power and as long as he can improve hitting lefties. I expect a really good season from Bird, and he is a steal where he is being drafted (if at all) right now.

Sleeper - Steve
Tommy Joseph, Philadelphia Phillies. Tommy Joseph is not a name that everyone may be familiar with, but he's a name you should get to know before your fantasy draft. Joseph was called up from Triple-A last May and in roughly 350 plate appearances, smacked 21 home runs with 47 RBIs, while splitting time with Ryan Howard. Howard has now exited Philadelphia, so it looks as though Joseph should see full time work in 2017. He may not hit for great average (although he really showed improved plate discipline from August through the end of the season), but he has a chance to hit 25+ home runs and be good source of RBIs as well. He's currently being drafted outside the top 250 in Yahoo! leagues, but is going about 40 picks earlier in the NFCB. Follow the advice of the NFBC and look to Tommy Joseph to fill your corner infield position. Bust - Ryan
Freddie Freeman, Atlanta Braves. I swear, I’m a Freeman fan, I am. I know it doesn’t appear that way with me putting him here, but I do like the guy. However! And it is a big however. Right now his ADP is right around 27th or 28th overall. That is early third round. I know that first base is fairly shallow, and Freeman had a great year last year, but we gotta pump the brakes on this one. He hit over .300 last year, but he had only done that one other time in his six Major League seasons. And not only were his 34 home runs a career high, it obliterated his previous best of 23. I know he is 27 years old, and supposedly hitting his “prime”, but I just don’t think Freeman is that kind of power hitter. I totally expect his average to be back in the .280s and his home run total to dip to the lower 20s. It still will be a nice season, but if you draft him in the third round, I believe you will come away disappointed.

Bust - Steve
Hanley Ramirez, Boston Red Sox. Whereas Freddie Freeman may be entering his prime years, at 33 years old, Hanley Ramirez has sailed past his. That's not to say that he still can't be productive though, as evidenced by his .286 batting average last season with 30 home runs, 111 RBIs and 81 runs. However, Hanley hadn't hit over 20 home runs or 90 RBIs since 2012 when he hit 24 dingers with 92 runs batted. I'm not sure I believe this renaissance will continue. Yes, the Sox have a great lineup that he will be hitting in the middle of, but for a guy who is in his mid thirties with an extensive injury history, I'm not willing to risk my fantasy season chasing last years' stats.

Sleeper - Ryan
Mike Moustakas, Kansas City Royals. Moustakas finally became the player we expected he could be in 2015 when he clubbed 22 home runs and hit .284. OK, maybe we didn’t expect that high of a batting average, but he certainly improved his approach at the plate. He was looking good again in 2016 with seven home runs in just 27 games before a torn ACL ended his season. He has just started playing in Spring Training games and barring a setback, will be ready for Opening Day. I’m not exactly sure why he’s being drafted after the 20th round, but if he can even keep his batting average over .250 he is a great value. Is Ryon Healy in a gang??? He's going to get himself waxed if he's not careful!

Sleeper - Steve
Ryon Healy, Oakland Athletics. I'm a big fan of the potential of Ryon Healy. Healy played in Double and Triple-A, as well as in the Majors last season, and he hit over .300 in all three levels. Not only that, but from August on (226 plate appearances) he hit .320 with 11 homers, 17 doubles and 30 RBIs. He's still a relative unknown as that was his first stint in the Big Leagues, but if I can draft solid talent at first and third base, I prefer to swing for the fences when looking to fill my corner infield position. That's what Healy offers. He's currently the 18th third baseman off the board in the NFBC and he provides great value for a potential 20 home run hitter that can hit for average.

Bust - Ryan
Adrian Beltre, Texas Rangers. After just 37 home runs the previous two seasons, Beltre came back with a vengeance hitting 32 in 2016 alone. There are a number of factors that make me question whether Beltre can repeat such stats again. First, he has already suffered a calf strain early in the Spring. Now, there is plenty of time before the regular season starts, but I don’t like an aging guy getting hurt so early. That’s another factor, he will turn 38 years old in the first month of the season. The days of Barry Bonds playing into his mid 40s has passed, and Father Time is batting 1.000 against us mortals. He is also going to be playing in the upcoming World Baseball Classic. In my opinion, a guy with a nagging injury in his later 30s needs less stressful baseball, not more competitive baseball. He’s being drafted right around the end of the sixth round and I’m worried we are going to have home run totals more in the low 20s than in the low 30s and you will come away wishing you went for one of the elite guys at the position.

Bust - Steve
Alex Bregman, Houston Astros. I realize that Alex Bregman could be the next "big thing", and has the potential to hit 30+ home runs this season. I'm also concerned however, that he hasn't had more than 285 plate appearances at any level along the way, and during his time in Houston, he struck out almost a quarter of the time. He's moved up the ranks very quickly, and I just feel that he's going to have his fair share of struggles, especially with a power stroke combined with his elevated strikeout rate. He may be good, but I'm just not up to the risk that I feel he poses to be my third baseman.