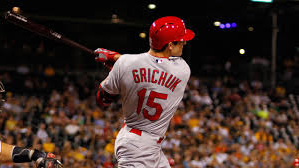 We have now covered the Middle and Corner Infield positions in our Sleeper and Bust series, and now it's time to look at the outfield. When looking at the outfield, it can be a little overwhelming with so many people in the player pool. Let Ryan and myself help you sift through the field as we let you know some players we are staying away from this year, as well as some outfielders you can find at a good value later in the draft.

Ryan
Randal Grichuk, St. Louis Cardinals. There were hopes going into last season that Randal Grichuk would be a force in the middle of the Cardinals lineup. He started okay, but he then went into a funk of epic proportions. It got so bad that the Cards had to send him to the Minors. However, he finished the year very strong and had 12 of his 24 home runs and 33 of his 68 RBIs in the last two months of the season. He showed real home run power in the Minors, so his output in August and September is no fluke. He is just 25 years old, and won’t turn 26 until August. Right now he is being drafted around the 17th round, and that would be a great time to get a guy who has a legitimate chance to mash 30 home runs and hit .270. Steve has been a fan of Jarrod Dyson for the last two years. Let's see if he proves us right with the opportunity he has in Seattle.

Jarrod Dyson, Seattle Mariners. My partner in crime, Steve, has been on the Jarrod Dyson bandwagon for a few years, and every year I call him crazy because he hasn’t had regular at-bats in Kansas City. Even though he hasn’t had a season where he has had even 300 at-bats, Dyson has still been good for 30+ steals in three of the last four years. Dyson has a new home in Seattle in 2017, and has a job starting in left field waiting for him on Opening Day. If this guy is able to get 500 plate appearances, he is a near lock to steal 40 bags and his batting average won’t kill you. He is lasting until about the 20th round, yet somehow Billy Hamilton who will maybe give you 10 more steals and a worse batting average is going in the seventh round. Dyson is a major bargain in 2017.

Steve
Kevin Kiermaier, Tampa Bay Rays. By now, most people know that Kevin Kiermaier is one of the best defenders in MLB. However, he may be on the verge of improving his offensive game to the point he can help your fantasy baseball team as well. Last season he hit a career high 12 home runs in only 414 plate appearances (he missed two months with a broken hand). His success was due to an increase in his fly ball rate paired with an increase in his hit hard percentage. He's made some strides with his swing and the fruits of his labor are set to pay off even more in 2017. Not only that, but he can also steal you 20 or more bases, and with the improvement he's shown in his walk rate, he may be on base more to have an opportunity to steal even more. According to Fantasypros, his aggregate ADP is the 67th outfielder off the board. For a guy that can potentially give me 15 home runs and 20 or more stolen bases, I'm very happy to invest a later round pick in Kiermaier.

Michael Brantley, Cleveland Indians. Michael Brantley is an elite outfielder capable of hitting over .300 with 20+ home run/steal potential. Unfortunately, injuries derailed his 2016 season and that has made him a potential draft bargain in 2017. Look, he has a surgically reparied shoulder and biceps, and it's still a question as to whether he will be ready for Opening Day. There is still the chance he doesn't return to form this season, but he's being drafted as roughly the 50th outfielder in fantasy drafts, and there is enough upside there for me to stash him on my team. If you do draft him, make sure to also draft enough depth at the position in case he struggles at the beginning of the season, but he could be a second half, fantasy producer and help carry you to a championship.

Ryan
Charlie Blackmon, Colorado Rockies. This one is all about ADP. Blackmon had a huge season last year where he changed from more of a stolen base threat, to a legitimate home run hitter as he put 29 balls in the stands in 2016. People are salivating hoping he can keep that kind of power, as well as get back to his 40+ stolen base ways of 2015. Not only do I not think that he will come that close to matching his home run total from last year, he is currently being selected in the front half of the second round in most drafts, and I think that is at least a round too soon. I know he will still be in Colorado, but less than half of his dingers came at Coors, so his home park really isn’t a factor. He will still be leading off which I think will make his approach more about getting on base than hitting the ball out of the park, so I expect him to drop at least six or seven homers off of his pace. Unless he starts stealing bases like crazy again (only had 17 last year), I think you are going to be disappointed if you take him in the first two rounds of your draft. Ryan Braun is one of the most hated players in the League and Ryan definitely shares that sentiment.

Ryan Braun, Milwaukee Brewers. It has been back to back pretty good seasons for Braun after two pretty awful ones. He hit .300 and slugged 30 homers for the first time in four years. Even more surprising is that he kept his stolen bases over 15. In line with that, his ADP has him going right around the turn at the end of the third round. I believe his skills are declining with a long injury history, and his age isn’t helping him. He has been “relatively healthy”” for the last three years, but even in those seasons he generally misses a month. Injuries can happen to anyone, but I’m not putting my late third round pick on a guy who no one expected to have that kind of season last year. He will likely have a productive season, but I expect low 20s in home runs and even fewer steals this year, which doesn’t warrant a pick in the top 40.

Steve
Giancarlo Stanton, Miami Marlins. People keep waiting for Giancarlo Stanton to explode and hit 50 home runs, but I'm not sure it's ever going to happen. The guy strikes out too much and ALWAYS seems to be banged up. His batting average will likely be in the .260 range and I don't want to spend a late second/early third round pick for him. Let's take a look at his Steamer projections for 2017. They see him hitting .268 with 34 home runs, 89 RBIs, 74 runs and three steals. Now let's compare that to the Steamer projections for Mark Trumbo. They see Trumbo hitting .259 with 32 home runs, 89 RBIs, 74 runs and two steals. Trumbo hit 47 homers last season (Stanton has yet to hit the 40 mark in his career), and he's being drafted a good three or four rounds later than Stanton in drafts to date. If Stanton blows it out this year, call me wrong. I just think that you can get better value a little later in the draft if you pass on the oft injured, Marlins outfielder.

Justin Upton, Detroit Tigers. I want to preface this by saying that I'm a Tigers fan. However, that doesn't mean I can't look at things objectively. Here's what I see. The last few years, Justin Upton's strikeout rate has steadily increased, while his walk rate continues to get worse. That has led to him hitting .251 and .246 over his last two seasons. While he can get you 25-30 home runs, there were 65 Major Leaguers who slugged at least 25 dingers in 2016, so quite honestly, his bat is nothing special. Unlike Stanton however, Upton is at least consistent. He's very likely to get 600+ plate appearances (has six straight seasons of achieving that), hitting 25 home runs, 80 RBIs and runs, with close to double digit steals. There is something to be said about his consistency, so he's not going to be a complete bust. I just feel this with his average draft position in the fifth or sixth round on Yahoo and ESPN, he doesn't provide great value. His name could get him drafted a bit earlier than I feel he should be, and I'm just not willing to draft him at a premium.