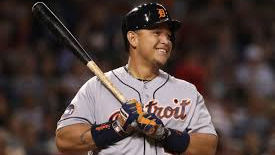 It's that time of the draft season where we here at Fighting Chance Fantasy want to bring you some guys we really like based on their current average draft position, as well as some guys that we feel are being drafted too high. Every season people make mistakes in taking players they shouldn't or they miss out on those potential breakout guys that can be found later, and Ryan and I want to help you not make any mistakes on draft day. Let us help you navigate your draft successfully as we bring you our first base Sleepers and Busts!

Forever stuck in a timeshare for the Angels, Cron was finally set free when he was traded to the Rays this Spring. Now, Tampa isn’t exactly a hitters paradise, and he likely won’t have a lot of protection around him in the lineup, but Cron has serious power. He’s never going to win you a batting title, but he did hit 16 home runs last year in only 339 at-bats. There is absolutely no reason that he shouldn’t be the every day first baseman in Tampa, which should give him the chance at 550-600 plate appearances for the first time in his career. His batting average should be around .260 and he has a real shot at 25 homers or more. He is currently being drafted around the 24th round and could be a major steal this season.

I thought for sure that the St. Louis Cardinals homer, Ryan Hallam would have selected the Cards' backup first bagger, Jose Martinez, but I guess his loss his my gain. In roughly half of a season last year (307 plate appearances), Martinez hit .309 with 14 home runs, 47 runs scored and 46 runs batted in. Not only that, but he showed he is a patient hitter as he walked over ten percent of the time and struck out less than 20 percent. At 6'7" and 215 pounds, he also showed he can smack the hell out of the ball as he was among the leaders in the league in exit velocity, so I think the hitting tool is there for this guy to succeed at the major league level. The only worry that Martinez has is playing time. As it is now, he is their backup first baseman to Matt Carpenter and will also serve as their fourth outfielder, so he should get some semi-regular at bats as it is. However, if Carpenter or any of the outfielders miss any time, Martinez should be in line for some serious play. Not only that, but Carpenter can play all over the field, so if something happens to Jedd Gyorko or Kolten Wong, Carp could shift leaving another opening at first base. He is currently going as the 33rd first baseman off the board according to Fantasypros, and he is the perfect late round flier who could pay serious dividends if given regular at bats.

A new home might not mean more production for Eric Hosmer.

Listen, Eric Hosmer is a nice player. I’m not saying he is going to suck. I just don’t know if his power numbers are sustainable, and I’m not sure he is worth a sixth round pick. I look for power at first base, and while he has hit 25 homers in each of the last two seasons, I just don’t know that he can do it again. And not that Kansas City is an awesome hitters park, but he now calls cavernous Petco home. I’m sure Hosmer will have a nice season. But if he finished the year hitting .275 with 18 homers and 80 RBI I wouldn’t be the least bit surprised. And I want more than that out of my sixth round pick and starting first baseman.

As a fan of the Tigers, this pains me to write but I am very scared of Miguel Cabrera's fantasy outlook in 2018. Miggy dealt with some serious back issues last season, and as a guy who has had back issues myself, I worry it will be very difficult for him to return to the Hall of Fame caliber player we have grown to love in Michigan. Not only that, but the Tigers have gutted their roster in an attempt to rebuild by removing guys like JD Martinez, Justin Upton and Ian Kinsler, so I also worry that his counting stats will take a hit with very little talent around him in the lineup. He's currently getting drafted with an ADP in the 70's on Yahoo and CBS, and that's just a little to risky for my taste.