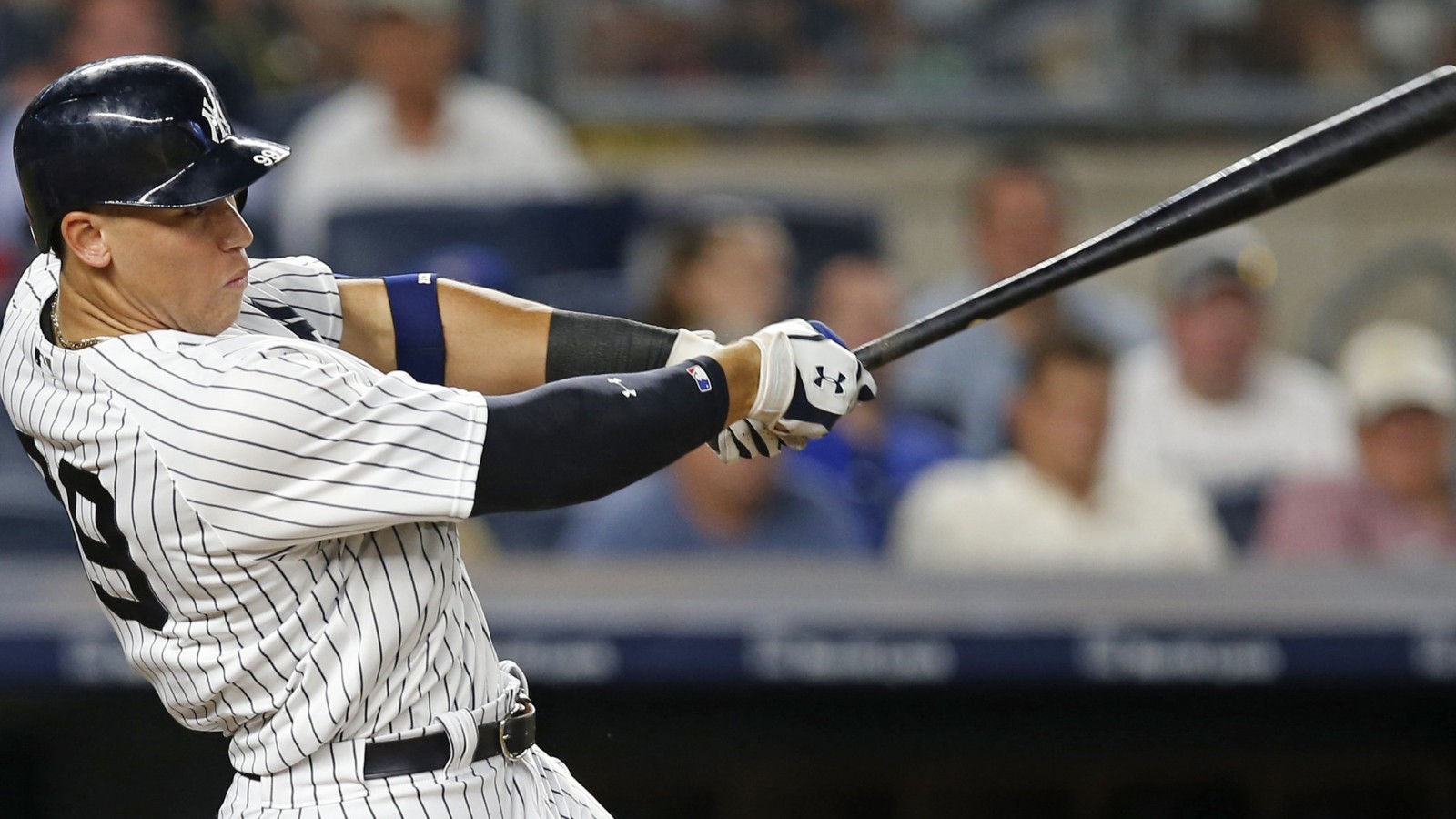 Oh the joys of baseball! All of these streaky players are enough to cause male pattern baldness. Oh my goodness, that’s what’s wrong on top of my head! Yup, it's fantasy sports, causing this hair loss.  Streaking players are part of baseball, but that’s no excuse not to stay on top of things, and that’s what I’m going to do for you here below.

Aaron Judge (OF, New York Yankees): A first month of the season that will go down in history, was all the rookie did for the Yanks this past April.  While sharing the power spotlight with Ryan Zimmerman, Freddie Freeman and Eric Thames, Judge is only a rookie.  Below is a chart made by Fangraph's Craig Edwards, and it puts into perspective just how impactful Judge has been for the Yanks this young season.  The numbers below have only happened 18 times since 2002, and Barry Bonds is littered throughout the chart, all the while he was...ummm…clean?  Ahh, that’s another conversation for a later date though.  The question we need answered though, is this sustainable for Judge?  The answer is no. Ten bombs a month is not going to happen, unless Judge has been exposed to Gamma Rays and is hopping to games instead of flying with the team.  For now though, he is Judge, jury and executioner in the Bronx Bombers line-up, and has been in the mix with great history so far. Two more bombs last night are cementing Judge onto the ballots for Rookie of the Year.

Most Powerful Aprils Since 2002

If you're a fan of 90's alternative music, you should get the Jeremy reference. If you don't like it, you're a weirdo!

Jeremy Hellickson (SP, Philadelphia Phillies): Not one to blow you away with a mystifying fastball, Jeremy Hellickson has only 11 whiffs in his 30 innings pitched. Hellickson though has been the Phillies best arm thus far. With a career ERA of 3.83, Hellickson has dropped two full points from that, with a 1.80 ERA to date this season, and has only allowed two home runs and a miniscule six runs in five starts. While wins are often considered the most meaningless stat in fantasy baseball, they are part of most leagues, and Jeremy has spoke in class today with four wins.  In the same five starts, he has also only issued three free passes to date as well.  Even after a loss last night to the Cubs, Hellickson is a sure bet to continue with a solid ERA/WHIP/ and wins if the Phillies provide run support.

Chris Davis (1B/DH, Baltimore Orioles): A traditional batting average egg layer, Davis is taking it to new lows to begin this 2017 season.  I have him in a few leagues, and he is sitting in lieu of Yuli Gurriel and rookie Cody Bellinger in one league.  We want the homers and OPS numbers that are usually through the roof, but good God man, you have a great hitter in front of you (Machado) and last year’s Home-Run king too. Coincidentally they are both starting slow as well.  Is it the elbow that was hit by a pitch that we need to be concerned with? Maybe right now, but what about the entire month of April?  With a .221 batting average and OPS of .704, and his usual long string of whiffs (38) so far, Davis needs to sit until we see more than three homers and six runs batted in.  If you have other options, feel free to use them. That or you can explore your waiver wire for players such as those mentioned above, or Victor Martinez, Ryon Healy, Danny Valencia or Josh Bell if they are available to cover the corner.  Davis’ line drive rate is actually higher this year (32.7%) than his career average (19.8%), while is fly ball rate is at 32.7%, down from 43.7% last season, so there is a light at the end of this tunnel.

Corey Kluber is on the DL...get him out of your lineups!!!

Corey Kluber (SP, Cleveland Indians):  With a strikeout rate of 9.99 K's per nine innings, Corey Kluber is bringing the strikeout pain, but that seems to be about it so far this season. With an ERA hovering just over the 5.00 mark and a .429 FIP, Kluber’s numbers look similar to some of his minor league numbers before turning into a Cy Young winner a few years back.  His home-runs per nine HR/9 is much higher than his career average, 1.69 vs 0.92, and this is haunting him this year, while his BB/9 is also up from his career average.  After earning $40.35 dollars last year, he is just sitting at $3 thru last night’s loss to Detroit.  You have to keep starting Kluber, but just be cautious running the Tribe’s Ace out there until he starts giving us more than the almighty strike-out.  Breaking News:  This just in, Kluber has been moved to the DL with a stiff back, so sit him for sure now.

You can always reach me @PolkaPat and be sure to read more of my nuggets at Mastersball.com