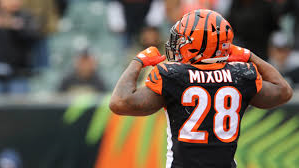 Welcome to the Fighting Chance Roundtable where we bring you weekly important fantasy football advice and decisions! These guys know that the hell they're talking about...well, Kevin and Brian do anyways, but every once in awhile Steve and Ryan can throw you a bone. Take a peek for some sleepers, busts, and other hot questions from around the league. Here are the Week 3 Roundtable participants.

Ryan: Antony Miller, WR Bears.  I am not ready to give up on this guy just yet. He is too talented to be completely forgotten in this offense. He at least got one target last week, and with the crappy Redskins defense, the Bears offense should get back on track and hopefully that means four or five catches for Miller. I'm not saying pick him up or play him, but I think he could have a good game.

Kevin: Phillip Dorsett, WR New Patriots. With Antonio Brown off the team, Phillip Dorsett is back in play for the Patriots as a viable fantasy option. Even with the full complement last week, he still found 3 targets for 39 yards but that role should expand. He's a nice flex this week against a sorry Jets defense likely to be missing a lot of pieces including C.J. Mosley and Quinnen Williams.

Brian: Darren Sproles, RB Eagles. The Eagles are without DeSean Jackson, Alshon Jeffery, and probably Dallas Goedert. This really shrinks the offense. There is no vertical threat. There is no big veteran presence on the outside. Enter the ageless Darren Sproles, a man Doug Pederson trusts immensely. I can see Sproles not only playing running back, but getting looks out of the slot.  The birds need to get the ball in playmakers hands and Sproles gives them that opportunity.

Steve: TJ Jones, WR Giants. Sterling Shepard may be returning this week for G-Men, but Golden Tate is still suspended and Cody Latimer is out and with Benny Fowler likely to miss Week 3, TJ Jones could be a sleepy play this week. Last week he turned four targets into three receptions for 38 yards and a score, and he could be in for an even better week with Daniel Jones behind center against the Bucs.

Ryan: Joe Mixon, RB Bengals. He has a grand total of 27 rushing yards through two games and he faces the top notch Bills defense. The Bengals offense is in disarray and this game should do Mixon no favors in getting his season on track. He is borderline benchable in redraft leagues and he can't be cheap enough to use in DFS games.

Kevin: Brandin Cooks, WR Rams. With Jared Goff not exactly firing on all cylinders so far in 2019, this obviously affects their pass catchers, but none more than Cooks. Cooks has seen just 12 targets and only converted half into receptions. If Denzel Ward is active, Cooks should see plenty of him on Sunday night.

Brian: Frank Gore, RB Bills. Ok so Devin Singletary is out, whoopee. This offense is led by Josh Allen. He's the 1st, 2nd, and 3rd option in the run game. I don't buy Gore as a goal line option for a second. I see him having a typical Gore game of 17 rushes for 62 yards. That's a hard no from me pal.

Steve: Josh Jacobs, RB Raiders. So far the rookie Josh Jacobs is off to a nice start as he is the RB6 in standard scoring leagues. However, he's currently dealing with a hip injury, as well as an illness that has reportedly caused him to lose ten pounds this week. I am staying away from Jacobs wherever I can as he faces the Vikings in Week 3.

Which Wide Receiver that lost their quarterback will be the best in Week 3? Michael Thomas, Juju Smith Schuster or Robby Anderson?

Ryan: Michael Thomas. Teddy Bridgewater didn't look good at all, but hopefully that was shaking off the rust. It was unexpected that he had to come into the game and the Rams defense is great. Bridgewater has been a starter in this league before an he knows how to find his best receiver. All you have to do is get the ball near Thomas and he will do the rest. His value will take a hit, but I don't see it being a huge hit.

Kevin: Michael Thomas (by far). When Teddy Bridgewater came into the game in relief of Drew Brees, he targeted Thomas 11 times, so I have no issues with Michael Thomas going forward. He's still a locked in WR1, though he loses some ceiling with the new quarterback.

Brian: Juju Smith Schuster. Mason Rudolph is a competent passer who at least looks the part. My "Fantasy Football Hustle" co-host Dwain McFarland thinks Rudolph lacks the arm strength to do what Big Ben does and while that's true, I think the targets will still be excessive. These other options are dead in the water to me. Remember though, backup QB's come in and often focus on their second team wide receivers. Heads up to you DFS players.

Steve: Michael Thomas. He's the best wide receiver of the bunch and Teddy Bridgewater is the most experienced of these new quarterbacks. While I may be tempted to by Juju, Thomas loses the least amount of value of these three.

Which Running Back will be the best this week? Aaron Jones, David Johnson or Nick Chubb? With Cam Newton (likely) on the bench, would you rather play DJ Moore or Curtis Samuel?

Ryan: Aaron Jones. I think all three will have solid games, but I just have a little chub for him...and not Nick Chubb, either. When Jones is on, he is a top ten back and even though the Broncos have a solid rush defense, I still think Jones will be productive. You can't go wrong with any of them. However, both Johnson and Chubb haven't quite clicked yet this season, so I'm going to say Jones.

Kevin: Nick Chubb. I'm going with Nick Chubb. The run defense has never been a strong suit for the Rams under Sean McVay, and while they bottled up Alvin Kamara and Latavius Murray last week, that seems like an outlier to me given the injury to Drew Brees. He's not going to put up McCaffrey Week 1 numbers, but he's going to have a quality day which should take some of the pressure off of Baker Mayfield.

Steve: David Johnson. Johnson takes on the Panthers this week who have given up 266 rushing yards so far this season, which puts them ranked 26th this season in rush defense. Kyler Murray is averaging 47 pass attempts per game, and the Cards have to realize that they can't put this much on a rookie quarterback. Look for them to try and balance this offense out by getting Johnson more involved this week.

Brian: Nick Chubb. I love me some Nick Chubb. If his coach wasn't such a moron, he would get the ball 20 times a game. He's incredibly talented, insanely versatile, and oh yeah, Baker Mayfield looks los. Give the damn ball to Nick Chubb!h
Johnson and Chubb haven’t quite clicked yet this season, so I am going to say Jones.

With Cam Newton (likely) on the bench, would you rather play DJ Moore or Curtis Samuel?

Ryan: Curtis Samuel. Both players had a good game with Allen at quarterback in Week 17 last season, but Week 17 didn't exactly mean a lot. I am going to say Samuel because he is more of the slot receiver and I think he will not only get more targets, but I think he catch rate will be higher than Moore. He still could have six or seven catches in this game.

Kevin: DJ Moore. D.J. Moore is still the play between him and Curtis Samuel, but don't be surprised if the chasm narrows between the two in terms of value with the QB shift. Cam Newton hasn't even been great (or serviceable) and D.J. Moore has already put up 16 catches on 24 targets. Imagine when he gets Kyle Allen, who could even be an upgrade in the passing game over Newton?

Steve: DJ Moore. DJ Moore has more targets, receptions and yards than Curtis Samuel this season and I don't think it's because of the quarterback. I think it's because he the better receiver. Not only that, but Samuel is best when you can use him all over the field and Ron Rivera and Norv Turner are just not creative enough to maximize his talents. Moore is the pick.

Brian: Curtis Samuel. Yikes. This offense has looked like TRASH but they are still putting the ball up a ton. Cam has been awful but has attempted 89 passes in two games. Kyle Allen isn't the joke most backup QB's are. Last year he played in a game vs the Saints and was 16-27 for 228yds and 2 TD's. I think he'd lean on Curtis Samuel as the intermediate threat. I still think both guys will underwhelm but if I had to pick one I'm leaning Samuel.