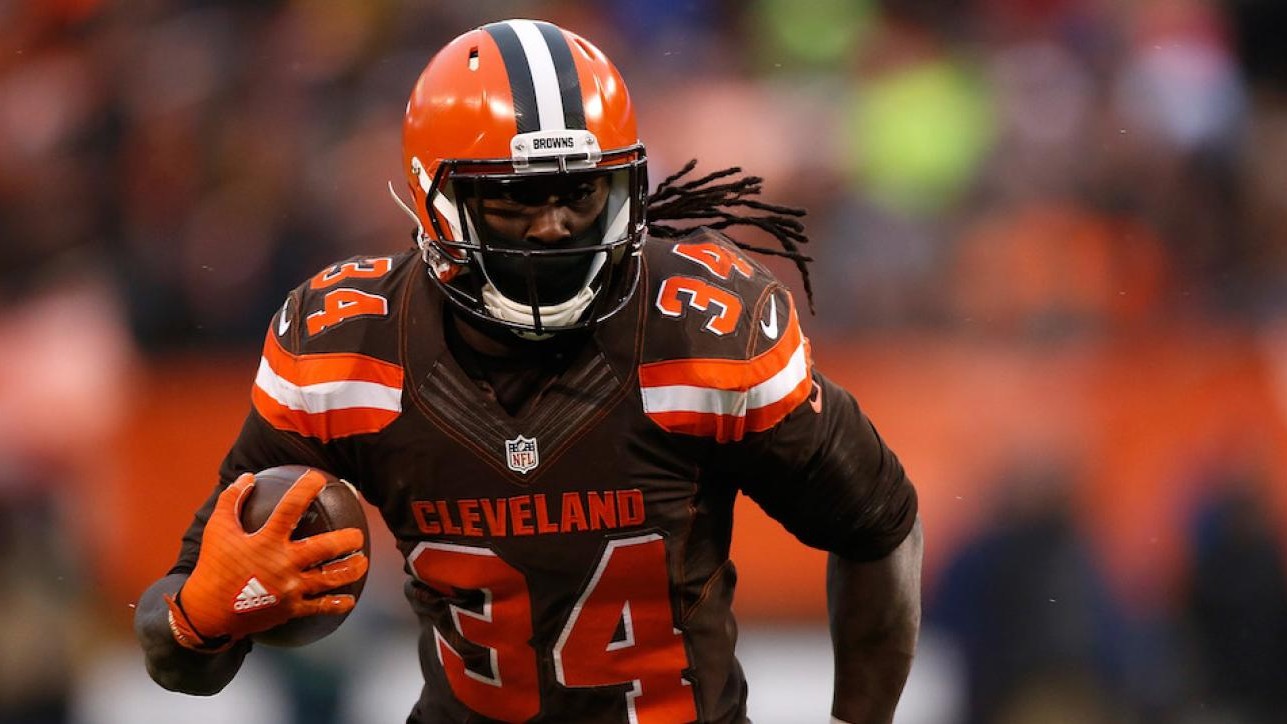 Fantasy Football prep is always one of my favorite times of the year. It's a time where you can dig in "elbows deep" and bury yourself in stats, player profiles and read numerous articles to set yourself up to draft the perfect fantasyfootball team. It's also a time where you can set yourself apart from your leaguemates as you identify players who may not be on many people's radar, as well as identify players who you might want to steer clear of.

That's where we come in. Ryan and Steve are here to help you win a championship this season and today, we want to help you at the running back position. Below are some running backs that we like, as well as some we may pass on...at least at their current average draft position. We would love your feedback, so feel free to comment below or shoot us a note on Twitter and let us know what you think!

You can hit Ryan up on Twitter @fightingchance and Steve @fantasygeek37

In case you you missed our sleepers and busts for Quarterback, you can find it right here.

With the rookie struggling, Rob Kelley could have a larger role in the offense than some predict.

Given the chance to start in Week 8, Rob Kelley came in and did a very good job. He had three straight games of over 85 rushing yards, highlighted by a 137 yard, three touchdown day against the Packers. He did run out of gas some down the stretch, but Kelley proved he could play, averaging a respectable 4.2 yards per carry for the year. The Redskins brought in Samaje Perine in the fourth round of this year’s draft, and everyone went crazy thinking he was easily gonna take the job. While he is very talented, Perine has struggled in pass protection in camp, and fumbled in a preseason game. There’s no faster way to get in your coach’s doghouse than by fumbling, especially as a rookie. Perine could take over at some point, but Kelley’s role is looking great right now. He is being drafted as the 35th running back right now, and I will guarantee he will outperform that draft position. Get yourself some Fat Rob in the 8th round or so and you got yourself a steal.

Another rookie that everyone is in love with is Joe Mixon in Cincinnati. The kid is very explosive, and has a bright future in the NFL. However, Jeremy Hill is still on the roster, and he has scored 29 touchdowns in his short three year career. Mixon is still a rookie, and will still have to prove himself in pass protection, and have learned the entire offense. I don’t care what anyone says, Hill is still going to be a part of this offense. In what many called a down year last season, he still rushed for over 800 yards and nine touchdowns. Right now Hill is being drafted as the 51st running back off the board, and for a guy who at worst as touchdown potential, that is too low. If you can get him in the 11th-12th round, that would be a great pick for a guy who is still young and has the chance to lead the team in carries.

This was the look on Jay Ajayi's face as he read Ryan's writeup on him.

Jay Ajayi burst onto the fantasy scene last year in Week 6 when he ran for over 200 yards and two touchdowns against the Steelers. He followed that up with 214 yards and another score against the Bills. From Week 10 until the end of the season, he only surpassed 100 yards once, and that was another 200 yard explosion against the Bills again. I guess the Buffalo defense failed to watch tape of their own game with Ajayi if they allowed him to run for that many yards again. My problem isn’t with Ajayi the runner. Although he does run upright, doesn’t try to avoid contact, and has already suffered a concussion this preseason. My problem is with his ADP. I understand for a guy that showed that much explosiveness, his draft stock is going to be high, but to take him late in the first round, or within the first few picks of Round 2 is just a little too steep for me. There was his fair share of dud games to go with these monster explosions, and that early I want a guy who is going to give me more consistency. I’m sure he will have a fine season in 2017, but to me, the price tag puts too much risk for him not to live up to that draft status.

Isaiah Crowell had a very nice 2016 as he was a mid round pick who nearly rushed for 1,000 yards and had seven touchdowns. He is a hard runner, and unbelievably actually wants to be in Cleveland. However, it just got real this year. Crowell is now being drafted as the 14th running back off the board in the third round. I know Cleveland has a great offensive line, but they have little passing game, and Crowell is going to have to deal with Duke Johnson coming in on passing downs, and I’m sure he will get 100+ carries as well. Crowell didn’t even get 200 carries last year, so he is going to have to maximize every touch he gets to repeat last year. From Week 5 to Week 12, Crowell rushed for a TOTAL of 211 yards. I think people are remembering what a good value he was last year and his handful of good games, but I believe that there are better options in the third round.

If those knees hold up, Jamaal Charles could be in for a nice season.

I want to begin by saying that I expect CJ Anderson to be the lead back in Denver. I really do. So if Anderson gets a majority of work in this offense, how can I put Jamaal Charles on my list of sleepers? Well, it comes down to efficiency for me. Yes, Jamaal Charles is coming off a major injury in 2016 (so is CJ Anderson, by the way). But if you take away his 12 carry, 2016 season, Charles has never averaged less than five yards per carry in his career. I think we could see Anderson get 65%-70% of the rushing attempts, with Charles seeing 130-140 carries. If he could hit five yards per attempt, he could see a respectable 650-700 rushing yards.

I also expect Jamaal Charles to be the primary back on passing down situations. In the six seasons where he hasn't been taken down by injury, he has averaged approximately 43 receptions per year. Even if he could add 35 catches in 2017, that would make him a valuable asset in PPR leagues. If he was able to hit those conservative numbers...650 rush yards, 35 receptions for 300 yards, with five touchdowns, that would have made him the RB24 last season in PPR leagues. He's currently being drafted as the 42nd RB off the board on Fantasy Football Calculator and while he does pose a considerable injury risk, you aren't investing a lot in drafting him where he's currently being drafted.

I love me some Dookie! No, not that kind of Dookie. I love Duke Johnson from the Cleveland Browns. During his first two seasons in the NFL, Johnson has averaged 57 receptions and topped over 500 receiving yards, each year. Last season he upped his yards per carry from 3.6 to 4.9, and finished as the RB31 in PPR leagues. Head coach, Hue Jackson has also gone on record several times saying that he expects an increased role for Johnson this season and wants to put the ball in his hands as much as possible. He must be getting drafted pretty damn early with all that good news, right? Wrong! On Fantasy Pros, he's getting drafted as the RB46 and on Fantasy Football Calculator he's going as RB50. While I think Isaiah Crowell is a great guy to own as well, Johnson should provide you great value in later rounds and is definitely a target of mine in PPR leagues. 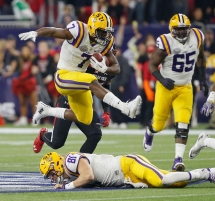 It will be hard for Leonard Fournette to make plays like this with a bum foot.

Last season, Ezekiel Elliott set the bar pretty high for rookie running backs as he rushed for over 1,600 yards, with 16 total scores, and finished as the number two, fantasy running back. Fantasy football is a copycat league, so this season everyone is wondering which rookie will be the Zeke Elliott of 2017. I'm not sure any of them will, but with Leonard Fournette being the highest drafted back in this years' draft, going fourth overall to Jacksonville, many believe if anyone can do it, he can. I'm not quite so sure.

Fournette is currently being drafted as the 10th back off the board on both Fantasy Pros and Fantasy Football Calculator. If you want him, you will likely have to spend a mid to late, second round pick on him and that scares me mightily. One of the main things that scares me is that Fournette is already dealing with foot injuries this preseason and it is on the same foot that caused him to only play in seven games last year. I hate to see foot injuries for a running back, and whether it causes him to miss time, limit his production, or even causes him to frequently be on the injury report where you never know if he is going to play, that worries me a bit. I also still think TJ Yeldon will play a role on third down and possibly Chris Ivory could see some goal line duties, and while I feel he has all the talent to be a stud in the NFL for years to come, I think it will be difficult for him to be able to live up to his lofty average draft position in 2017.

Last season, I bought into Lamar Miller hook, line and sinker. I got screwed. I'm not the type of guy who holds a grudge and will never draft a player who burned me in the past, but I worry that it will be difficult for Miller to live up to his average draft position this season. If you want him, you will have to invest a late, second round pick on him, as he's currently going as the 13th running back off the board. Last season he set a career high for carries (268), but he also hit his career low for yards per carry, as he only rushed for 4.0 yards per attempt and finished as the RB19 in PPR leagues. Word going around Houston is that head coach, Bill O'Brien feels Miller could be at his best with less volume than he saw last season, but based on his declining production from the last few seasons, I'm thinking that he may not be as talented as I originally thought. He should still play a bigger role in the passing game, but if he sees less volume, I don't feel comfortable investing a second round pick in Lamar Miller.