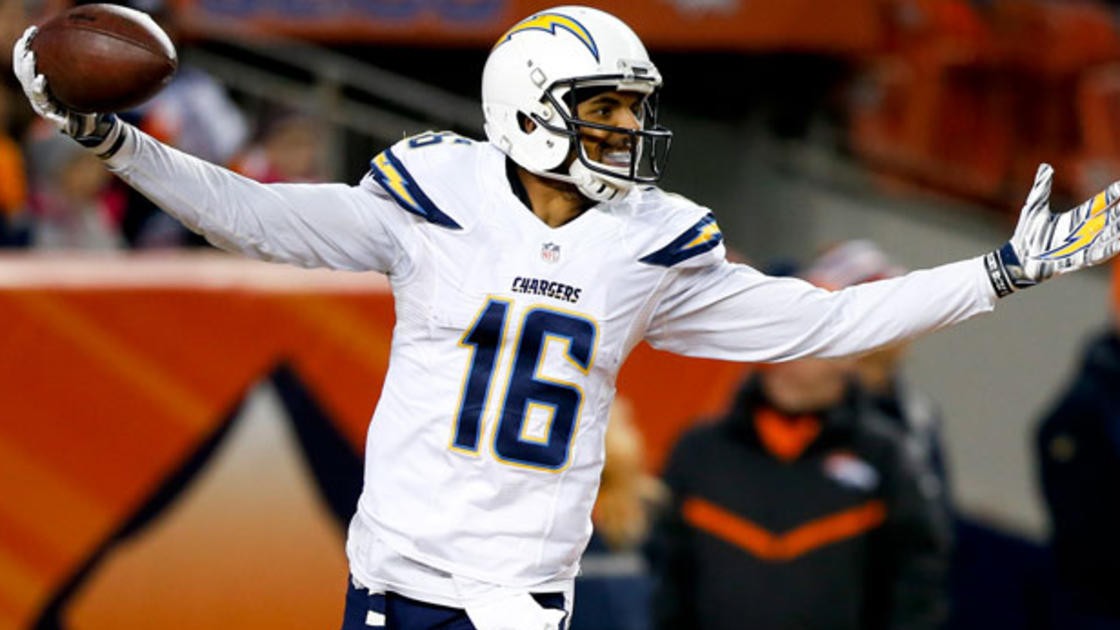 It used to be that you needed to draft a stable of running backs to win a league championship. Then in the last year or two, the zero running back theory became popular, and wide receiver was the position to grab early and often. That has now gone by the wayside now and the current strategy is to draft a balanced team filled with backs and receivers. Go figure... We already published some players who can help/hurt you at the running back position and now it's time to dig into wide receivers. Ryan and I have identified a few that we really like this year, as well as a few that we are staying away from. Let us know your thoughts in the comments below or hit us up on the Twitter box!

Ted Ginn has never been a heavy volume reception guy, so don’t see him on this list and expect him to catch 80-85 balls, because that’s likely not gonna happen. However, what he is good for is touchdowns. A bunch of touchdowns, and long touchdowns at that. He goes from Carolina who was a run heavy team, to one of the most prolific passing games in the NFL in New Orleans. Not only that, but he now has Drew Brees as his quarterback, a guy that can haul it deep, despite not being a big guy. He will need to cure his dropsies that he gets from time to time, but everything you have heard from New Orleans is how much Brees loves Ted Ginn. If he can get some trust built up with Brees, Ginn could be a frequent deep target. He might top out at 60 catches, but if Ginn can threaten or surpass ten touchdowns, which he could, he is going to far outperform his 10th round ADP at this time.

With all of the injuries to the Chargers offense last year, someone had to emerge and that was second year man Tyrell Williams. He had three 100 yard games, and eight games with five catches or more. Now, for some reason it appears that people are down on the Chargers pass game, but I don’t know why. Sure, Melvin Gordon is great, but he was great last year too and Williams still broke 1,000 yards with seven scores. I also know that Keenan Allen is returning from injury, but even if he does stay healthy (which is a big if) Allen will help Williams by taking the defense’s best corner away. This will leave Tyrell an easier defender to beat. I think Williams can improve on his 69 catches last year, and keep his yardage around the 1,000 from last year with seven to eight touchdowns. Somehow a guy with that potential is lasting until the 10th round which would be robbery if you could get him there.

There’s no doubt that the former fourth overall pick out of Clemson, Sammy Watkins, has a lot of talent. However, it is the inconsistency and recent injury problems that has me shying away from him. A calf injury and a knee injury cost him three games in 2015, but a broken foot and complications from it, cost him half of last year. The foot injury which he suffered last May let him back on the field for two games before he missed the next eight for the Bills. He also had another surgery on the foot in January. This troubles me very much. He also was just traded to a new team in the Rams. Now, I have a lot of hope for Jared Goff and hoping that under new Head Coach, Sean McVay will install a creative offense. However, the Ram offense has a chance to be not very good. And with Robert Woods and Cooper Kupp on the team, Watkins won’t be the only receiver capable of making a play. Watkins is going roughly as the 20th receiver in the fourth round, and there are a BUNCH of receivers I have more confidence in than him in that spot. If I could grab him in Round 7 I would like it better, but at this ADP I’m staying away from Sammy Watkins.

I like Martavis Bryant. I think he is physically gifted, and has the ability to make plays that not everyone can. However, I’m having a hard time with where he is being drafted, which is currently in the fourth to early fifth round. Bryant has been suspended twice in a three year career for drug use, and has also dealt with a shoulder injury in 2014. So he basically has not had a season in the NFL yet where he wasn’t suspended or hurt. I don’t have a lot of confidence that this kid has his brain in order. What’s the phrase? Million dollar talent and five cent head? Everyone is still drooling over his eight touchdowns in ten games in 2014. I just can’t wrap my head around taking a guy with this many question marks ahead of established guys who I feel comfortable with. He has some nice potential, but a lot of coaches have been fired for players having potential, and a lot of fantasy owners have been left with their ass in their hands as they wonder how they missed the playoffs because of potential. I don’t want to draft potential in Round 4, I want a guy I can count on. I like Martavis Bryant, but right now his price is far too high for me. 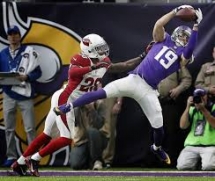 Adam Thielen can catch just about anything thrown his way.

Do you know what quarterbacks like? They like it when the person they throw the ball to, catches it. That's exactly what Adam Thielen did last year for Vikings quarterback, Sam Bradford. Thielen was seventh in the league in catch percentage (74%) and only dropped one of the 93 balls thrown at him. He also flashed his upside as he had 12 receptions for 202 yards and two scores against the Packers in Week 16. He finished as the WR29 last season in PPR leagues, yet amazingly, is being drafted as the WR49 in roughly the 11th round of drafts this year.

Sam Bradford may not be the best quarterback in the league, but one thing he excels at is accuracy. Last season, he was number one in completion percentage among qualified quarterbacks (71.4%), beating out even the likes of Drew Brees and Matt Ryan. He also finished 11th in the league in pass attempts per game, besting studs Tom Brady, Matt Ryan and Andrew Luck. With the addition of rookie running back, Dalvin Cook, he may throw the ball a bit less in 2017, but there are still enough targets to go around for Adam Thielen to greatly outproduce his current ADP.

Do you want a wide receiver who can catch roughly 70 balls for 1,000 yards with five or so touchdowns? Then Mike Wallace is your guy. Other than his abysmal year in 2015 with the Vikings, Wallace is a big play threat who surprising, is very consistent with his annual production. In his first year with he Ravens, he clicked with quarterback Joe Flacco and finished with 72 receptions for 1,017 yards and four scores, en route to finishing as the WR22 in PPR leagues. The Ravens acquired Jeremy Maclin this offseason and expect Breshad Perriman to take a step forward this year, but that could open up more desirable coverage for the downfield threat, Mike Wallace. He is a little more boom or bust on a weekly basis than some, but he's a virtual lock to outproduce his current WR50, average draft position.

Allen Robinson was a late, first round pick in a ton of leagues last season, yet finished as one of the bigger disappointments among wide receivers. Some are predicting a bounce back in 2017, but I'm not feeling quite so optimistic. I think the first, and most obvious reason for my skepticism is quarterback Blake Bortles. In three years in the league, he has never topped a 59% completion rate, thrown at least 16 interceptions each year, and while this preseason is very young, he has looked god awful so far. Not only that, but last season Robinson finished as the WR24 in PPR leagues, despite finishing seventh in targets (150). I'm not sure he will see an increase in targets or efficiency in 2016, no I'm not sure where an increase in fantasy production would necessarily come from. I'm just not willing to spend a third or fourth round pick on a guy with so many questions marks attached to him.

I want to preface this by saying I like TY Hilton as a player. I like him a lot, actually. However, the main reason I have to include him on this list is because I am scared as hell that quarterback Andrew Luck, won't be healthy this season, and that could greatly effect Hilton's production. There are already rumors that Luck won't be ready for Week 1 and with an offseason shoulder surgery on his throwing arm, I am worried this could be something that lingers on throughout the season, even after he returns. Not only that, but the Colts offensive line is shaky to start with, and now they have lost center Ryan Kelly for roughly half the season with foot surgery. I feel like Luck could see a ton of pressure from opposing defenses this season and one good hit could mean disaster for TY Hilton. Hilton is currently getting drafted in the mid to late second round of drafts, and that's just a little to steep for me.