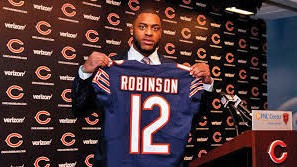 Throughout the preseason we will be publishing questions that we think fantasy players are pondering every day as they are getting closer to draft time. But instead of just having our opinions, we are asking some of our friends in the industry to try to help us out by giving more opinions to these questions so our fantastic readers have as much information as possible when forming their opinions.

Which receiver on a new team will have the most success in PPR leagues? Allen Robinson, Jarvis Landry, Brandin Cooks, or Michael Crabtree?

While I believe Jarvis Landry will make an impact with the Browns in 2018, I believe Michael Crabtree will be the most productive wideout of this group. And while he is coming off his worst statistical season since an injury-stricken 2013 campaign, Crabtree is poised for a bounce-back year.
I couldn't love his landing spot anymore either. Not only will he be playing in an offense that desperately needed a No. 1 wideout last season, but I fully expect the Ravens to feature Crabtree as such -- in the past, we've seen Joe Flacco have tremendous success with veteran WR signings including Anquan Boldin and Steve Smith, and I believe that trend will continue despite the struggles of Jeremy Maclin in a similar spot in 2017.

I expect to see a lot of Michael Crabtree in 2018. In fact, it wouldn't surprise me if he drew closer to the 145-target mark -- he saw at least 145 targets in 2015 and 2016 with the Raiders -- than the 101-target mark that he saw last season. Why? Well, he's the only experienced and reliable pass-catcher on the roster -- I mean, c'mon, are we still buying John Brown and Willie Snead. The only competition for targets that I can realistically anticipate will come from Hayden Hurst. I believe the rookie tight end will be Joe Flacco's second read behind Crabtree. With a tremendous opportunity ahead, Crabtree has mid-to-high end WR2 upside in 2018, which is a steal at his current sixth-round (6.05) ADP at FFC. I'm taking Crabtree over Chris Hogan (5.11) and Corey Davis (6.06) and Pierre Garcon (7.02).

Well, let’s look at the Consistency of these receivers in 2017:

Allen Robinson – Only played 1 game due to injury.

So, as we head into 2018, we have to look at their new teams and see which one gives them the opportunity to be better or worse.

Allen Robinson – Brand new team, new coach, new system! I can see some struggles with the consistency for this offense as a whole until everyone gets in sync. I can see Robinson matching his 2016 consistency numbers of around 55%-60%, which would rank him around a WR3.

Brandin Cooks – He goes from The Patriots where he was only 63% consistency to a run-first team in the Rams. I can see him match his 63% consistency from last year, which ranks him as a WR3 as well.

Michael Crabtree – He goes from the Raiders where he was the #2 receiver in Oakland to the #1 receiver in Baltimore. Prior to last year, Crabtree put up back-to-back 69% consistency, which ranked him in the Top 20 both years. I expect him to match the 69% in Baltimore due to sheer target volume alone. That ranks him as a low-end WR2.

Jarvis Landry – He’s my winner. Think about this, he was 94% consistency last year with JAY CUTLER as his quarterback and Devante Parker as his WR2 (he sucks). This year in Cleveland he gets Tyrod Taylor as his quarterback and Josh Gordon on the other side. So, no team can double-team Landry. He’s a great possession receiver and while he may not 90%+ in consistency. I can see him in the 75% range, which should rank him as a high WR2 or low-end WR1.

For me the choice is Allen Robinson, but I know he is just as, or maybe even more so, chancy as the other three. After a down 2016 when the whole Jaguar’s team took a dump, Robinson missed all of 2017 with a torn ACL, so he brings an injury risk to the table that the others do not.

But in 2015 boy did he have a year. He finished 6th in fantasy PPR scoring among all WRs with 80 receptions, 1,400 yards and 14 touchdowns. Both the yardage and touchdown totals are numbers none of the other three have ever attained in their 17 total years in the league.

Robinson joins the team with new Head Coach Matt Nagy who is coming over from The Chiefs. Nagy is an Andy Reid disciple and looks to put some flash back into this Bear’s offense.

The other thing I like is that outside of RBs Tarik Cohen and Bennie Cunningham no other player on the entire team has ever caught more than 37 passes. You can bet that if Robinson is healthy Nagy is going to try to push him back to his 2015 numbers and thus is the only one of these four that really represents upside.

This is a tough call as I think each of these receivers will have a very nice season. To me this decision comes down to one thing...upside. And with upside being my main deciding factor, I’m going to go with Allen Robinson as he takes his talents to the Windy City.

Robinson displayed what he’s capable of in 2015 when he had 80 receptions for 1,400 yards and 14 touchdowns. He could be the most physically gifted of the quartet of receivers we are looking at for this article and I love that he has Matt Nagy and Mark Helfrich creating a fun offense for him to flourish in.

Michael Crabtree is 30+ years old on a Baltimore team that I don’t have a ton of trust in. Jarvis Landry is fine, but with Josh Gordon, Corey Coleman, David Njoku and Duke Johnson, there are a lot of mouths to feed in Cleveland and Brandin Cooks is a very good deep threat, but I think Woods will gobble up the targets underneath and Todd Gurley will once again see a lot of action. I can easily see Robinson scoring the most touchdowns of the group as well as be in contention to lead in receiving yards. Bye Bye Blake Bortles, hello Mitch Trubisky!

While I am expecting Brandin Cooks to have a great first year with the Rams, this question said PPR leagues, and that is what will take Cooks out of contention. I like Michael Crabtree to be the best receiver in the bunch in Baltimore, however, their offense looks to heavily rely on the run. I like Jarvis Landry’s situation, but with so much uncertainty in Cleveland I can’t pick him here. That leaves me with a guy that I have liked since his rookie season and that is Allen Robinson. In fact I had named a fantasy team Mr. Robinson’s Neighborhood.

There is certainly warnings with Robinson as he is coming off a torn ACL and is now on a new team. However, I do like him for two reasons. First is he tore his ACL in Week 1 so he has had more than enough time to heal. Second, I think he goes to a team with much less competition for catches. Taylor Gabriel was also brought in, but he isn’t a top flight receiver. Robinson has already shown the ability to be a true number one, and that is what I expect him to be this year. I love what we saw at the end of the season from Mitch Trubisky and expect him to take a big step forward under the new offensive coaching regime. I like all four of these guys, but give me A-Rob.