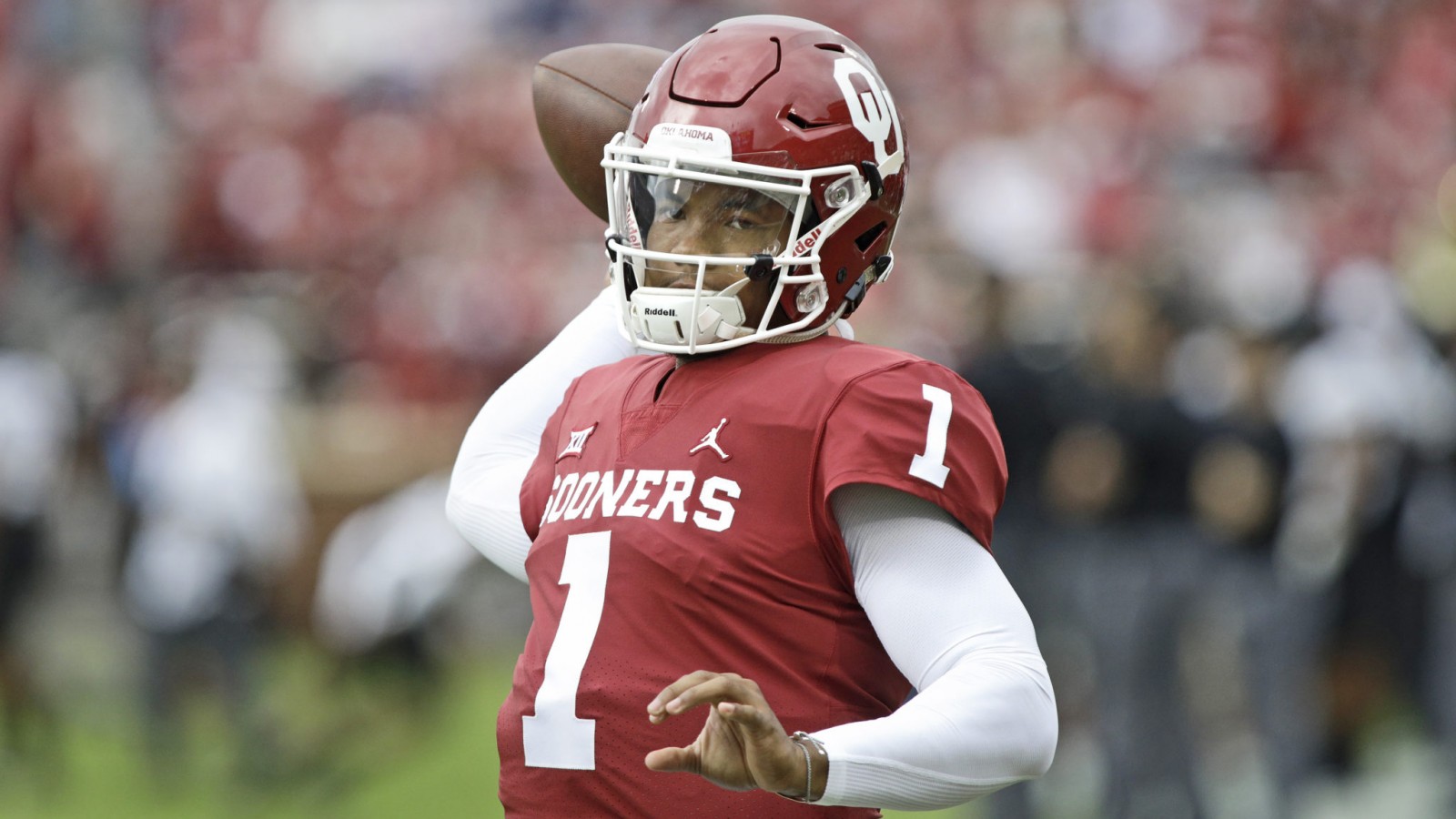 .The NFL Draft is just two days away and if you're anything like me, the hours and days are just dragging on as I wait in anticipation for the Draft to kick off! To help us pass the time so we can get through these last couple of days, the Fighting Chance Fantasy crew held our second NFL Mock Draft to see if we could predict how things would shake out. Ten of us took turns picking for the teams assigned to us and I have to say, I think we have some pretty good pickers on this team...including Polka who is always two knuckles deep up his nose.

Make sure to see how our picks have changed over the last week by checking out our first Fighting Chance Fantasy NFL Mock Draft. We would love your feedback so I included links to our Twitter handles to make it easy to let us know what you think of our picks.

Jim Day (@fantasytaz) - I really hate making this pick here because it is so common, but since we are not doing trades, it has to be him. For Arizona to not take him or trade down would be an enormous mistake for them. Personally I truly think they should trade down and get more picks.

Ryan Hallam (@fightingchance) - This is a no brainer to me and what I am hoping for as a 49er fan. The only other acceptable outcome to me is them to trade down no farther than four if a team wants a QB and they can still get Allen or Bosa. Bosa is a quarterback's nightmare and pairing him with Dee Ford should give the Niners a pass rush they have needed for years!

Brian Drake (@drakefantasy) - The best interior D-lineman in the draft.  Most people see Jets taking a defensive end, but Williams can be a game changer for the next decade.  He’s my pick for the Jets.

Pat Wisniewski (@polkapat) - With a team that needs everything, you grab impact players and Gary is an important defensive need. After attending numerous Michigan games while Gary played in Ann Arbor, I hear his name in my sleep, as he was in on every play it seemed.

Dwain McFarland (@dwainmcfarland) - On paper the Bucs are a 4-3 team, but new defensive coordinator, Todd Bowles, has history with the 3-4 as well.  Allen provides flexibility to morph between the two.  Allowing 7.3 NY/A (Net Yards per Pass Attempt) will get you beat in the NFL - this team has done that two consecutive years.  Allen can provide immediate impact against opposing quarterbacks with his ability to get after the quarterback.

Mike Riggall (@coachriggall) - The addition of Taylor would solidify the Giants O-Line as one of the greatest in the league, keep Eli upright and make an even better situation for Barkley.

Kevin Tompkins (@ktompkinsii) - Well, it was going to be either Taylor or Sweat. Sweat provides the Jags an elite athletic specimen and a building block for the future. The defense has gotten a bit older, especially on the line, so Sweat's 4.4 speed will play beautifully and could be the next great pass rusher in the AFC South.

Steve Rapin (@fantasygeek37) - I’m pissed that Sweat went with the previous pick, but the Lions have a very weak linebacker Corp and could use a guy like Devin White. White’s coverage skills gives him the edge over Devin Bush.

Kacey Kasem (@thekaceykasem) - Tyler Kroft can't stay healthy and is more of a blocker. Charles Clay isn't there. They need a pass catcher, and Hockenson can be that dude. I can see him stepping right into a starting role.

Gary Haddow (@garyhaddow1) - With new head coach Vic Fangio at the helm, it’s hard to see the Broncos pass on Ed Oliver, but the Broncos quarterback carousel since Peyton retired is their most glaring need... oh wait they have Joe Flacco...

Brian Drake (@drakefantasy) - Take your pick on which hole you want to fill first.  O-Line, linebacker, quarterback if available, but if Oliver is there he's a great plug and play option for a horrendous defense.

Pat Wisniewski (@polkapat) - In a team with many defensive needs, who couldn’t use an Edge Rusher. Along with 4.5 speed and added weight makes this a slam dunk.

Dwain McFarland (@dwainmcfarland) - Grier is not the top prospect remaining, but he is the best player at the most important position remaining.  Grier has football IQ and strong accuracy.  His arm strength has been questioned, but based on his accuracy charting in Matt Waldman's Rookie Scouting Portfolio he grades out as good or better than Kyler Murray and Dwayne Haskins in the intermediate and vertical passsing zones.

Jim Day (@fantasytaz) - Atlanta doesnt have many major needs, but cornerback is one they could use some help. I have Murphy over Greedy Williams and he would give them another ballhawk in their defensive backfield.

Steve Rapin (@fantasygeek37) - While he may not be the top WR in my board, the Redskins are desperate for a playmaker, and that’s exactly what DK Metcalf provides.  Josh Doctson and Paul Richardson don’t exactly inspire fear in opposing defenses.

Ryan Hallam (@fightingchance) - Cam Newton won't be around much longer if the Panthers can't find a way to protect him. So why not give him a solid guy to put in front of him?

Gary Haddow (@garyhaddow1) - I’m not a big fan of Daniel Jones here. But if reports are to be believed, the Giants love him.  I say go Drew Lock or trade back and take Jones. But the Giants get their heir apparent to Baby Face Eli.

Mike Riggall (@coachriggall) - The Vikings want to be more of a run-centric offense than they were in 2018 and adding a quality offensive lineman will help that - OL is the Vikings main need.

Kacey Kasem (@thekaceykasem) - Tennessee doesn't have a ton of pass catching options. They need a wideout who will flash, and Brown is that guy.

Kevin Tompkins (@ktompkinsii) - I was all set to take a cornerback (Byron Murphy) but then realized that the next great Steelers’ linebacker was still on the board. A three down run and chase ‘backer, Bush’s smallish size shouldn’t hinder him at the next level as the league gets faster and more agile. A plug and play for the next decade and Kevin Colbert would be absolutely thrilled if Bush makes it this far to the Steelers’ pick.

Brian Drake (@drakefantasy) - Safety and defensive end are popular picks for Seattle but they just paid Russell Wilson and he needs weapons.  Doug Baldwin is aging and injury prone.  Butler can become the WR1 Wilson needs.

Pat Wisniewski (@polkapat) - Ravens sadly have had one of the cruddiest wide receiver corps of the NFL since Steve Smith retired.

Jim Day (@fantasytaz) - There is no doubt that Houston needs O-Line help and McCoy is the best OL player on my board at this point. Sure to become a centerpiece of this Oline to protect Watson and to also open up running lanes.

Steve Rapin (@fantasygeek37) - The Raiders need secondary help desperately and Greedy Williams should be a good start in making their defensive backfield respectable.

Dwain McFarland (@dwainmcfarland) - Simmons may not be able to make an impact in 2019 for the Eagles due to tearing his ACL back in February while training.  His talent is probably too much to pass up though at 25 as he is regarded as a top ten talent by many NFL insiders.  Philly places a high value on rushing the passer (ranked first in PFF pressures in 2018 and 2019) but Fletcher Cox is 28 and Brandon Graham is 31.

Ryan Hallam (@fightingchance) - Colts need to give Andrew Luck another weapon to match with TY Hilton and Harry is a great option at the back end of the first round.

Kevin Tompkins (@ktompkinsii) - A “Gruden Grinder” if there ever was one, with the trade of Kelechi Osemele, .Lindstrom plugs right in at guard and is a perfect fit for Tom Cable’s line group. His athleticism will play nicely on a revamped line, with his run blocking already well above average. Mayock and Gruden jump on Lindstrom if available at #27.

Mike Riggall (@coachriggall) - If you follow the 3-year letterman on Twitter, you know you need some guys on your team that can withstand an SEC schedule.  Having Casey Hayward and Baker on the outside would be imposing.

Gary Haddow (@garyhaddow1) - The chiefs had added the Honey Badger, but lost Eric Berry this off-season. Adding the top Safety in the draft would help shore up their leaky defense.

Kacey Kasem (@thekaceykasem) - Bryan Bulaga will be an unrestricted free agent after the 2019 season. He'll also be 31. Drafting Dillard here gives the Packers much needed insurance.

Jim Day (@fantasytaz) - Bradbury is still learning how to play oline since converting from a TE in 2015, but he is versatile and can play both guard and center, both needs for the Rams, especially after they let Roger Saffold walk.

Dwain McFarland (@dwainmcfarland) - With Rob Gronkowski retiring and a general lack of passing weapons this pick just makes too much sense not to pull the trigger.