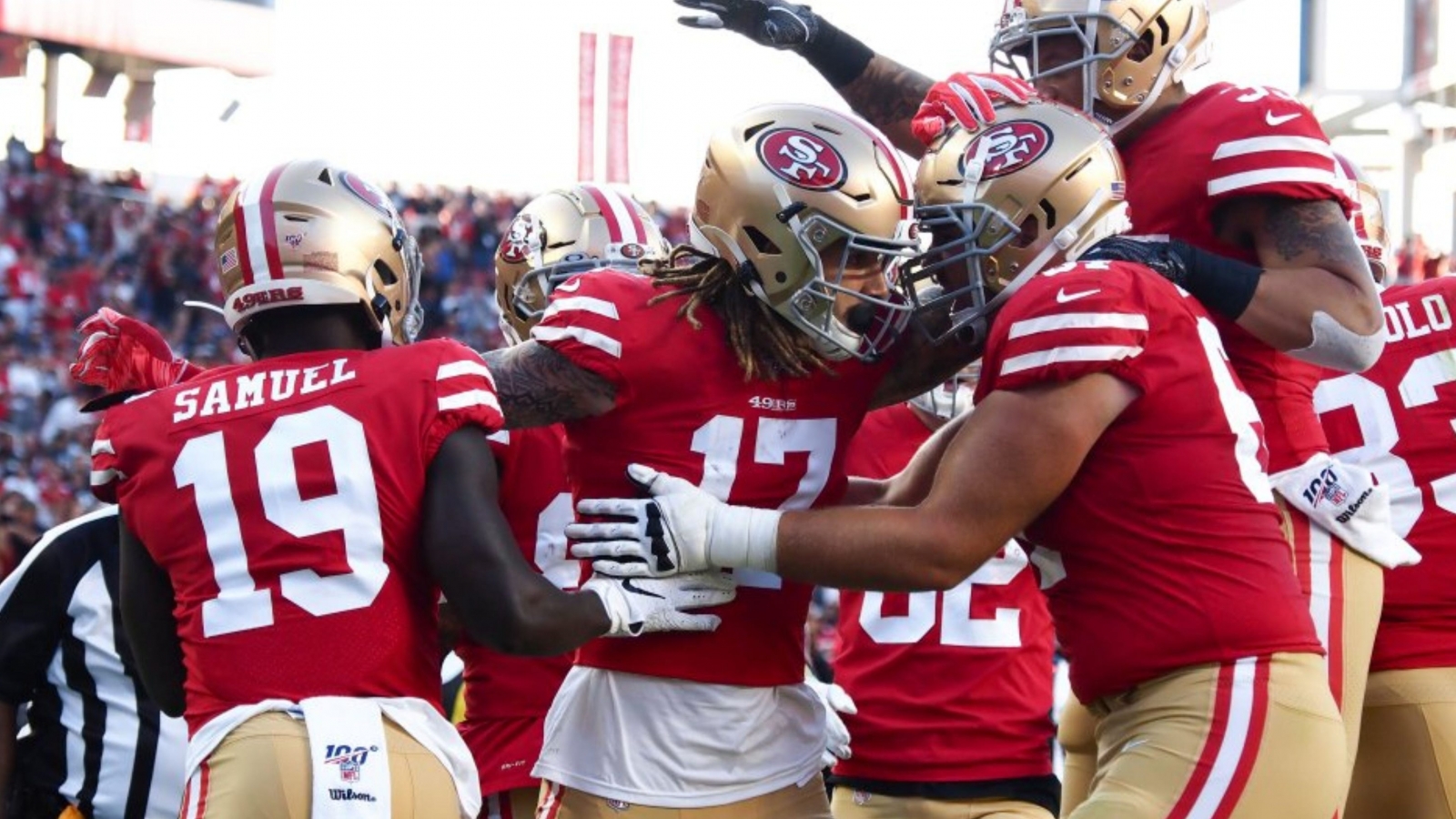 Which 49ers' wide receiver will take the next step?

Fantasy football championship aspirations can often be shattered by the unexpected injury of a cornerstone piece of one's fantasy squad. Fantasy owners and the San Francisco 49ers suffered a major blow with the recent news of Deebo Samuel fracturing his left foot while participating in offseason workouts in Nashville with teammates. Samuel was drafted by the 49ers in the second round, 36th overall in last year’s draft. As last season progressed, the talented rookie receiver became one of Jimmy Garoppolo’s go-to weapons. He finished the season with 57 receptions for 802 yards and three touchdowns while adding 159 yards on the ground and three additional touchdowns.

For those of you that have already drafted Samuel, there is nothing that can be done but pray for a quick recovery. Samuel has already stated that he will be back in two and a half months, but the likely timetable is three to four months. In dynasty leagues, this might be the right time for a buy-low opportunity, so it is worth kicking around the tires to see if there are any deals to be had for the stud wideout.

Now onto the options, first and foremost, Jimmy G’s favorite receiving threat will be George Kittle. He will continue being a top-two tight end this year and will be long gone by the completion of the third round in most drafts. Here are the wide receiver options to keep on a lookout this summer! 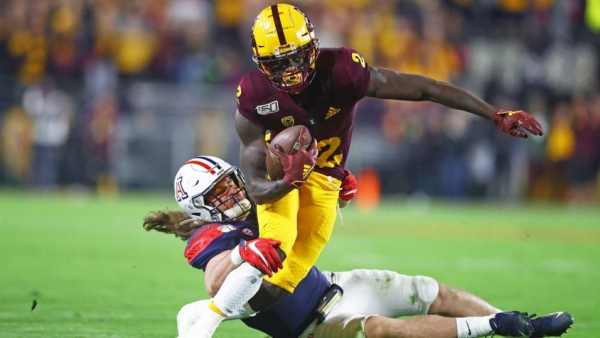 Behind door number one is Brandon Aiyuk. The 49ers first-round draft pick selected 25th overall. Aiyuk has the draft capital and now the clear opportunity to get limitless first-team reps. In his senior season for the Arizona State Sun Devils, he posted 65 receptions for 1,192 yards and eight touchdowns across 12 games. Aiyuk’s current consensus ADP is 177.8 which would make him a mid-late 14th round pick. His value will be on the rise throughout the summer. 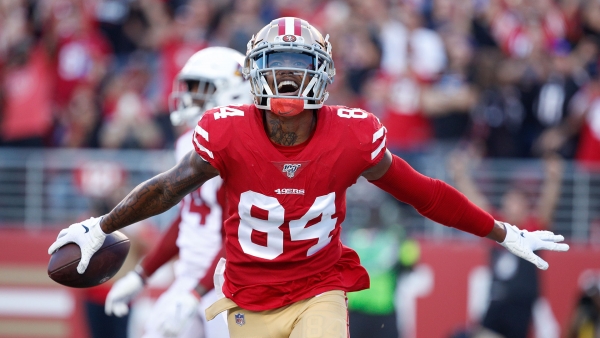 Kendrick Bourne is next on the list. He was the fourth-leading receiver, only behind Kittle,  Samuel and the departed Emmanuel Sanders who signed with the Saints during the offseason. Bourne was targeted 44 times last season and produced 30 receptions for 358 yards and five touchdowns. With Samuel out, Bourne might be worth an add in deeper dynasty leagues and could have some productive games early in the season as he would be one of the wide receivers with the best chemistry with Garoppolo. 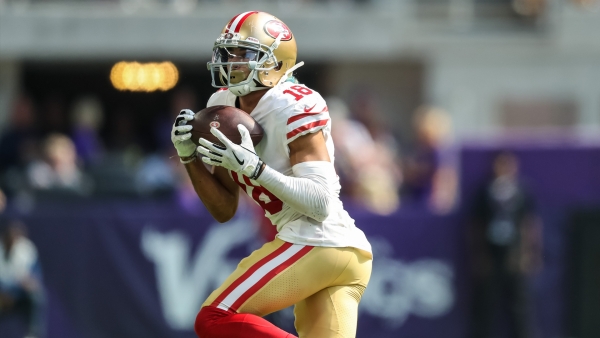 The next wide receiver that might be worth a late-round flier in dynasty start-up drafts would be Dante Pettis. Pettis had a late breakout rookie season for the 49ers in 2018. He finished that season with 27 receptions for 467 yards and five touchdowns. Last season Pettis entered coach Kyle Shanahan’s doghouse during training camp only to never be heard from again, due to Pettis’s lack of not taking advantage of opportunities given to him and not producing. This is a make or break season for the wideout. If he cannot take advantage of this last opportunity, he will be sent packing sooner rather than later. He is only worth a spot if you have an extra roster space in deep dynasty leagues. 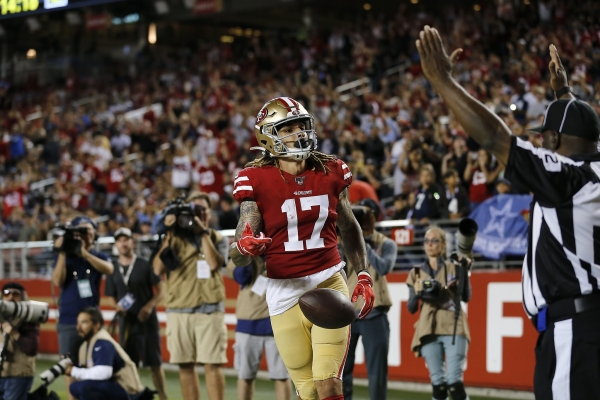 The wide receiver that has me most intrigued and that I am buying the most of this offseason is Jalen Hurd. Coach Shanahan was high on Hurd during training camp last season, but unfortunately never played due to a back injury he suffered. The offensive weapon was placed on injured reserve prior to the start of the regular season and never was designated to return. The converted receiver also played running back in college and appears to be a new shiny toy that coach Shanahan cannot wait to get his hands on. There were rumblings before the injury that coach Shanahan was going to play him in all types of formations in the offense. Hurd is a name to keep an eye on this offseason. If he is wondering in waiver wires pick him up quick in dynasty leagues as he is a must-own player. 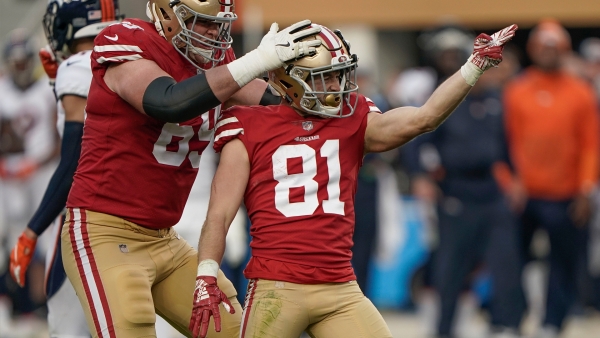 Another deep sleeper to keep an eye on this offseason is Trent Taylor. He is a slot specialist that also landed on injured reserve during training camp last year and missed the entire season. He has battled injuries throughout his career but has totaled 69 receptions for 645 yards and three touchdowns.

Even though the loss of Deebo Samuel stings, there are some glimpses of hope that he may return at some point this season. Regardless, there are other options on the 49ers’ roster that can help ease the pain. Starting with Aiyuk, Bourne, Hurd, and Taylor as players ready to take the next step on your fantasy rosters.