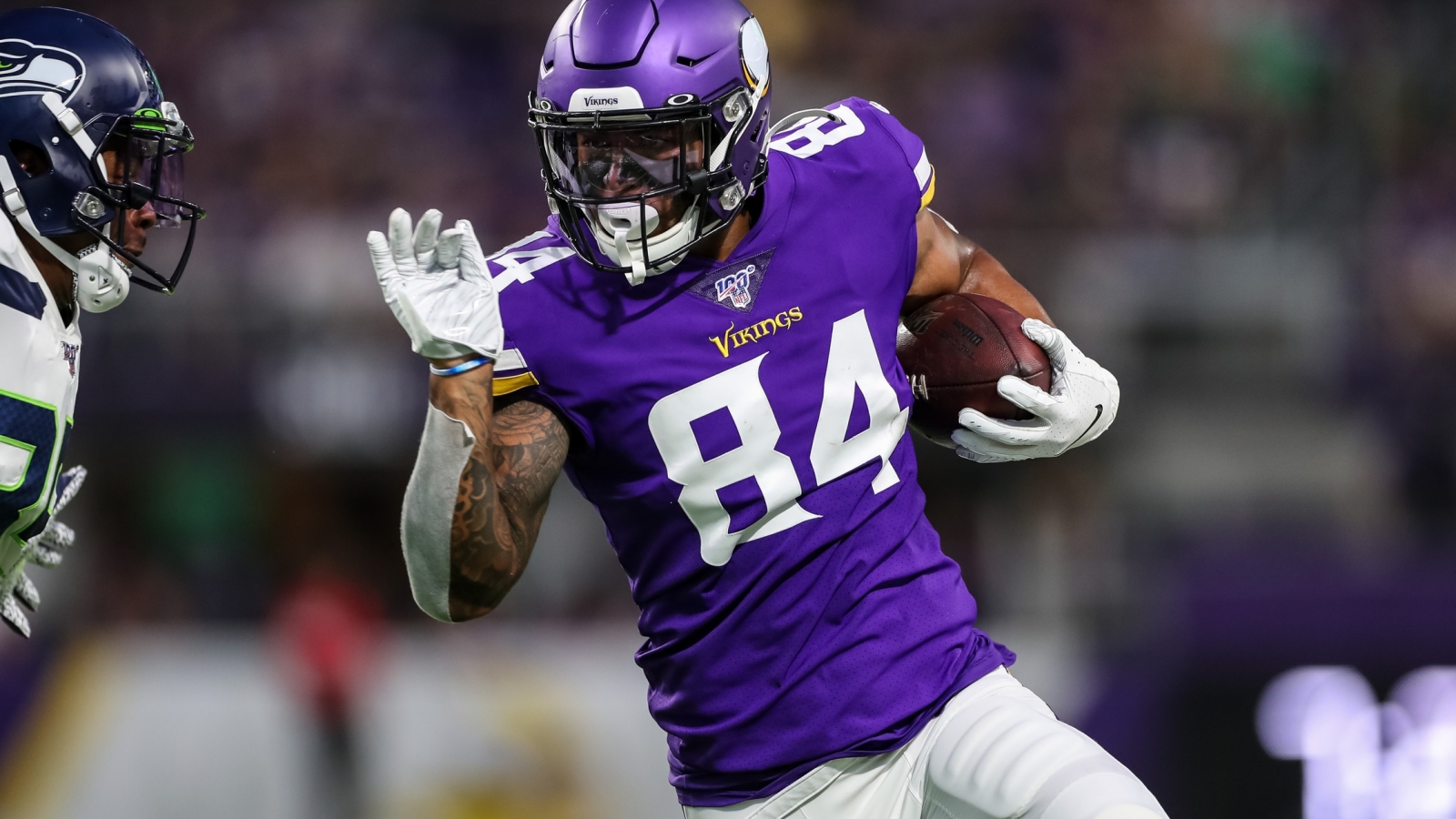 Tight End is one of the most difficult positions to nail down for fantasy football purposes. It always seems that if you do not draft one of the prime players at that position (Travis Kelce or George Kittle), then you have to cross your fingers and hope whoever you end up with will contribute decently to your fantasy team.

The dilemma with that is the tight end position is so hit or miss, it is often hard to pinpoint what tight end will “break out”. Break out tight ends do not seem to happen all that frequently, and when they do it comes by surprise.

Here are a few players for mid to late rounds of your fantasy draft that could have that big season potential. Will they be the next Kittle? Probably not. Will they be of assistance to your fantasy team? There is a big chance they will.

The new addition to the Atlanta Falcons offense looks to see a nice target share in the 2020 season. Hurst did not have an outstanding season in 2019, mainly because Mark Andrews stood out in the tight end spot. There were just numerous players to support in the Baltimore Ravens offense, and Hurst ended up being the one who suffered due to this.

With the Ravens in 2019, Hurst only had 30 receptions and two scores. He also only produced a mere 349 yards. Although his numbers did suffer, we should keep in mind that Baltimore drafted him in the first round of the 2018 NFL draft. He is a first-rounder who is now competing on a brand-new team. All things look primed for a sneaky good Hurst season.

Moving on from Baltimore, Hurst looks to break out with his current team. The Falcons’ former tight end Austin Hooper is now a Cleveland Brown. He leaves loads of targets behind. Last season, Hooper was targeted 97 times. Over two seasons, Hooper averaged five touchdowns, 93 targets (73 of those were caught), and 724 yards. Atlanta will watch for Hurst to slide right into Hooper’s spot.

Matt Ryan, the quarterback of the Falcons, is a veteran signal-caller who is normally on the same page as his receiving corp. Last season saw the Falcons with the most pass attempts in the NFL. Dirk Koetter will be back for his second season with the Falcons which yields a lot of stability for both Ryan and the team as a whole. Koetter has been recognized as a coordinator who enjoys using the tight end, so Hurst seems primed for a baller year.

One player climbing up everyone’s draft boards, slowly but surely, is Mike Gesicki of the Miami Dolphins. Get him while you can because he will not be a cheap option for long. For some unknown reason, everyone in the fantasy community got the memorandum that he is in for a dazzling year. Fancy that. So strike while you can.

Gesicki is frequently utilized as a slot receiver who knows how to spread the field when need be. If the offense decides to use him in the right way, he could be pure gold for your fantasy roster. In 2019, Gesicki saw 89 targets, caught 51 passes, totaled five touchdowns, and went for 570 yards. This was a breath of fresh air for Gesicki as he had a less than stellar rookie crusade, only grabbing 22 passes for 202 yards while racking up a whopping zero scores.

Injuries played a pivotal role in Gesicki becoming that go-to guy in 2019. Sleeper play Preston Williams sustained a knee injury, and both Gesicki and 2015 first-round pick DeVante Parker both profited immensely from this. Even if all the offensive weaponry can manage to stay healthy in the 2020 season, I recognize Gesicki can come up huge.

Ryan Fitzpatrick will presumably start at quarterback to begin the season which is great for Gesicki’s cause. Fitzmagic is a down the field passer, and Gesicki is a quick player who can find his way downfield in a hurry.

If rookie Tua Tagovailoa does end up taking over under center, watch for him to locate Gesicki early and often. Alabama did not use the tight end much in their system when Tagovailoa was there, but Tagavailoa does appear solid throwing to the slot. Since Gesicki spends a healthy portion of his time there, they should have a genuine connection.

I am aboard the Eric Ebron hype train this season. Remember when Ebron was a top-four fantasy football tight end? The 2018 season was a significant year for Ebron as he glowed brightly, snagging 13 touchdown tosses while tallying 750 receiving yards.

And then 2019 happened. Ebron found himself in a position where his marvelous quarterback retired out of the blue (hello Andrew Luck). Jacoby Brissett moved into the role of starting QB, and although he sufficed, he is no Luck. Brissett simply does not perform at the level Luck does, and it didn’t do Ebron any courtesies. On top of that, Ebron hurt his ankle and was only able to compete in 11 games.

This season, we see the former top ten draft pick pack up his bags and move on to Pittsburgh. Vance McDonald is there at tight end as well, but Ebron has been played alongside guys like Jack Doyle and was still effective. He accomplished incredible stats even with Doyle there catching targets as well. McDonald does not look like a tremendous threat to Ebron.

The 27-year-old Ebron will have a healthy Ben Roethlisberger hurling the ball in his direction this season. Roethlisberger will need to stay healthy for Ebron to have a big year, and circumstances are looking up right now. Big Ben was oft-injured last season, but looking at his numbers from 2018 shows he launched to his tight ends 111 times. This trend could resume in the 2020 campaign. Ebron has the potential to see immense touchdown numbers.

Want to take a chance on Hock? If you do, look for a prominent season from him. One of the most prominent concerns coming into 2020 is if Hockenson can stay healthy. The 2019 first-round get for the Detroit Lions concluded his rookie crusade on injured reserve. He is yet said to be at 100 percent, but expectations are he will be back to normal come the commencement of the 2020 season. Hockenson has been capable of running routes and working out, so he is on route to get back to his old form.

The eighth overall pick in the 2019 NFL Draft could be one of those touchdown-dependent tight ends, but aren’t they all? Coach Matt Patricia would like for the Detroit offense to be run-oriented, but there will be heaps of opportunities for Hock to see red-zone looks.

One key contributor to the less than great play from Hockenson last season had to do with the injury to Matthew Stafford. Stafford will be back as the starting quarterback this year which can only benefit Hockenson’s stats.

In the 2019 season, all three tight ends competing for the Lions achieved a total of 115 targets combined. Hockenson was the lead tight end when it came to targets, seeing approximately 52 percent of the passes thrown to tight ends. Although Hockenson was out for part of the season, he still achieved seven targets in the red zone, and this should grow in 2020. With a healthy Stafford tossing him the ball, he should be an important fantasy asset.

Irv Smith Jr. was not drafted to just sit there while Kyle Rudolph plays. Smith was out there on the field at the same time as Rudolph much of his 2019 season. Rudolph saw 10.3-percent of the targets from Kirk Cousins last season while Smith was able to see 10.1-percent. Not only that, but Smith’s slot snaps were leaps and bounds above Rudolph’s. Rudolph was in for 74 slot snaps while Smith occupied 188 of the slot snaps.

47 balls were thrown to Smith in 2019, and he pulled in 36 of them for two touchdowns and 311 yards. He was highly efficient, bringing in 76-percent of his targets.

These numbers are going to rise in the 2020 season, notably with Rudolph taking over more of a blocking tight end role. Rudolph is now 30 while Smith is only 21-years-old. You can be an older tight end in the league and succeed, but these second and third-year tight ends are the ones that tend to find their monster seasons.

Now that wideout Stefon Diggs is with the Buffalo Bills, Cousins will need to rely on someone else as his second option. Smith should be able to fill in perfectly. He is a touchdown threat with an athletic build that can only go up from where he was last year.

You can get Smith for relatively cheap, and you will be well rewarded for taking him in your draft. He is additionally a great fantasy buy, so get him now before he bursts onto the scene.

These are only five tight ends that can contribute to your fantasy teams right away. There are many more out there, even if they have question marks. The tight end position has been less fickle over the last few years as second and third-year players start breaking out, but it is still a complicated position to nail down. Hopefully, you will be able to find one of those diamonds in the rough that unearth a phenomenal situation during the 2020 season.

Feel free to reach out to me on Twitter @thekaceykasem. I love interacting with my followers and just talking shop. Also, make sure you check out my new podcast with my buddy JJ --- Fantasy Football, JK (available wherever you listen to your podcasts).