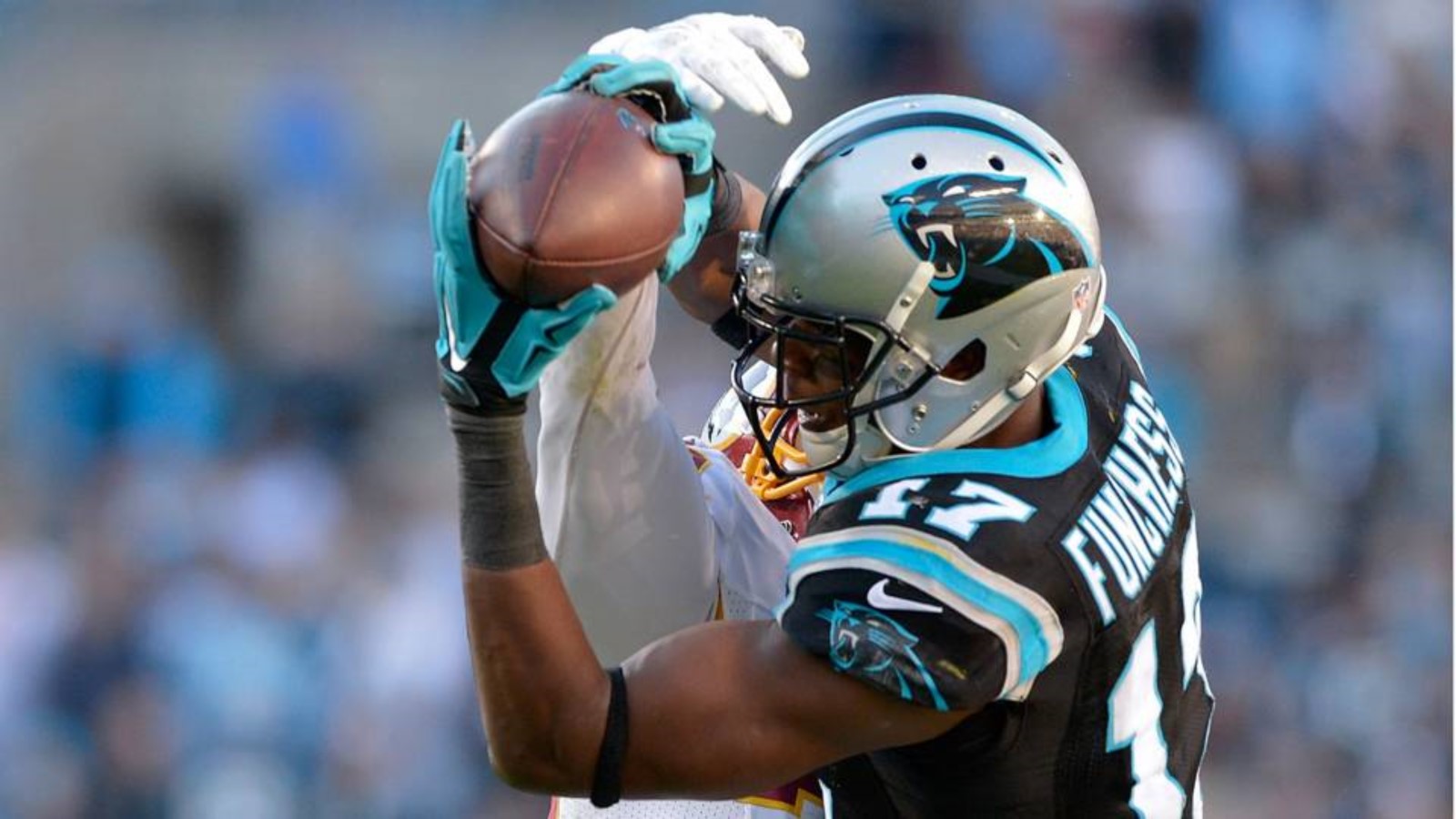 Trying to determine the fantasy effects of players moving teams, coming back from injuries or just having more pieces added around them are among the hardest things for fantasy owners to determine each year.

For yesterday’s Twitter question we asked about four receivers that fall into these three categories and we wanted to see how others view their chances in 2018.

@1stStopFantasy - Sammy Watkins. Likely the number three option in the passing game with an unproven quarterback. Biggest injury risk of the four as well.

@TheFFLWire - Have to agree on Watkins, Crabtree likely steps in as WR1 for offense, Funchess 1or 2 for Carolina and Garcon immediately 1 or 2 plus new target for Jimmy. Garcon injury potential is worrisome too but QB is the wildcard against Mahomes.

@CaptainKohana – Devin Funchess. I think he falls to fourth in pecking order by mid-season at latest. Olsen & CMC are the likely 1 & 2, both demanding over 100 looks. And I believe DJ Moore is flat out more talented and will establish himself quickly. Plus, Panthers aren't extending Funchess' contract.

@DraftBuddy - I've drafted him a couple times, but it might be Michael Crabtree. Has the most tenuous QB situation of the four.

Eric Olinger – Devin Funchess is most likely to bust compared to the other three. I don't think he's very good in general but being behind Olsen & CMC and fighting a talented rookie, I don't think the consistency will be there. He is a better best ball option if you can get him in the 7th round or so.

Perry Van Hook – I agree with Funchess and Eric's reasons... don't think the others "bust" but Garcon and Watkins could end up below projected levels. Crabtree is the best bet of these four.

@LionSlappy – Pierre Garcon due to health concerns. Dude is 32 coming off season ending-neck injury. Also has Thompson, Reed/VD, Crowder, Richardson, Doctson to compete with for targets.

@TheBauerClub - I’m still in dynasty mode...didn’t realize their ADPs were so close in redraft! Garcon is a concern because of his age and his injury, but I could easily see him being a safety valve for Jimmy G if he’s healthy. I’ll go with Funchess. TD regression as well as DJ Moore and Olsen being in the mix. I don’t see how he can get 111 targets again. Especially with Christian McCaffrey getting 107 touches per game according to Rivera.

James Greenwood  - I'm going to go with Michael Crabtree. Statistical production took a massive nosedive last season, now he is going to a team with a worse QB and a more balanced offense than what he played with in Oakland last season. Not to mention it is possible that he might not even be the best WR on the team, fantasy or otherwise.

@AaronD238 – Michael Crabtree. He is moving to a new team, which historically more receivers struggle in the first year than not. Plus, Joe Flacco puts up very meager numbers, having not finished as a top 20 QB in 3 years, plus he can barely support a WR3 in that timeframe, let alone anything higher.

Mark Spafford  - Funchess, I think the ball gets spread around more this year. Especially if Olsen stays healthy.

Daniel Yoldi  - Devin Funchess. Olsen is back and a top target for Cam, McCaffrey will get his and they didn’t draft Moore to not throw him the ball. Garçon will be a target monster, Crabtree as well to a lesser degree but will get the red zone targets. Watkins in a Andy Reid offense has me licking my chops.

@JohnMillerNFL - I'll say Funchess, Olsen is back and they drafted DJ Moore so he's an obvious candidate for target regression. Olsen and McCaffrey will both command hefty target shares, and Moore and Funchess will clean up the scraps.

@DynastyCraig - I think it’s Pierre Garcon just because of age and coming back from injury. Funchess a close 2nd as I’m not convinced he’s good.

@RekedFantasy – Pierre Garcon. Coming off injury and faded out of the offense to make way for longer term pieces.

Christopher Lejawa  - Pierre Garcon imo....I've had him the last few years and I believe the ride is over for him. He's been a great draft pick for me, but he will not get what everyone thinks.

Ken Zalis  - Devin Funchess for me...Cam isn't accurate enough and with Olsen back he is no better than the 4th option in the redzone now.

Angelo Lilas  - Devin Funchess. His numbers had help with the injury to Olson and the trade of Benjamin, left a gaping whole in targets and wasn’t overly impressive with the increase in role. Olson is healthy and added dj Moore I see a good dip in production.

@AJBerg4 – Michael Crabtree. I trust the QB/offense more for the other 3 players. Flacco is really fading. Love Lamar but not sure any rookie QB is going to consistently read the defense.

@JimCovFootball – Michael Crabtree- most WRs struggle with new teams. Also, Crabtree will likely draw top CBs, which should work against him. He's a very good player, but not good enough to overcome all that's working against him (including bad QB play).

Matt Schauf - Funchess. The Panthers just drafted a better WR and get back a TE who led the position in targets over his past 3 healthy seasons. Bonus: He’s a meh talent.

Mark Morales-Smith – Sammy Watkins. Because he usually does. Mediocre overall receiver. Injury prone. 4th option on the offense and not even the best deep threat plus a rookie QB.

I received 27 responses to this question and as you can see each of these receivers has their doubters heading in 2018. In fact each of the four received at least five votes, with Devin Funchess leading the charge with 11 votes.

Michael Crabtree signed a 3-year, $21 million deal in Baltimore to become their number one receiver. He is coming off a down year in Oakland, having caught just 58 balls for 618 yards, but he still managed eight touchdowns. In the two previous seasons with Oakland he had averaged 87 receptions, 962.5 yards and 8.5 TDs.

So now we have to decide if that dropoff last year was Crabtree’s doing or if Oakland just didn’t deliver as an offense. As a team in 2017 the Raiders had 788 fewer offensive plays, 115 fewer points, 6 fewer passing TDs and 7 more interceptions than they did in 2016. Their offensive ranking fell from 7th in 2016 to 23rd in 2017.

So maybe it wasn’t all Crabtree’s fault, huh?

Sammy Watkins is moving to the Kansas City Chiefs this season after signing a 3-year $48 million deal. This makes him the fourth highest paid receiver in the NFL. Seems a lot to pay for a receiver who has totaled 1,023 yards in the last TWO seasons, but he did have eight touchdowns in his brief stint with the Rams last year.

Kansas City must see something that most others don’t to pay him that kind of money and if anyone can get the most out of him Andy Reid is probably a good choice to do that. There has already been talk that they plan to move him all over the field to create ways to get him the ball. It will be interesting to see if they follow through with this.

I’m not a huge Watkins fan, but I find it hard to bet against Reid.

Pierre Garcon is still with the 49ers, but he is coming off a cervical neck fracture in 2017 and missed eight games. He has also never played with 49ers’ new QB Jimmy Garoppolo, so we still need to see if he can develop chemistry with him, plus there is just not a lot of news about where he is medically. Although he did go skydiving earlier in July.

He’s never been a big redzone threat so he will need over 100 targets and a connection to Jimmy Garoppolo to finish as a WR3 in fantasy in 2018, but it’s clearly possible if the neck holds up.

Last but maybe least is Devin Funchess. Funchess is coming off a career year with 63 receptions, 840 yards and eight touchdowns on 111 targets. But most think a huge part of those numbers were because the Panthers lost starting Tight End Greg Olsen in Week 2 with a broken foot. While Olsen did return in Week 12, he missed Week 13 while continuing to get better, but never seemed to get all the way back to healthy. Olsen only finished the season with 17 receptions and 191 yards on the season.

When you compare that to Olsen’s previous three seasons averages of 80.3 receptions, 1,061.6 yards and 5.3 TDs on 125.3 targets a year You can start to see some of the concerns listed by the readers above about Funchess, especially since all early talk of Olsen is that he is ready to go and in fact is in training camp now.

There has also been a lot of talk already about how much more they intend to use Christian McCaffery, who is coming off a 80 catch season himself and then you add in rookie WR DJ Moore who they drafted with the 24th overall pick and it definitely starts to get worrisome for Funchess. Most teams don’t invest a top draft pick on a WR they intend to sit. The team did also being in vets Torrey Smith and Jarius Wright, but neither have done anything of note in the last several years.

With them heavily invested in Moore and Olsen coming back I find it hard to believe that Funchess will get near the 111 targets he had last year and he will just not provide a good return on investment in 2018.