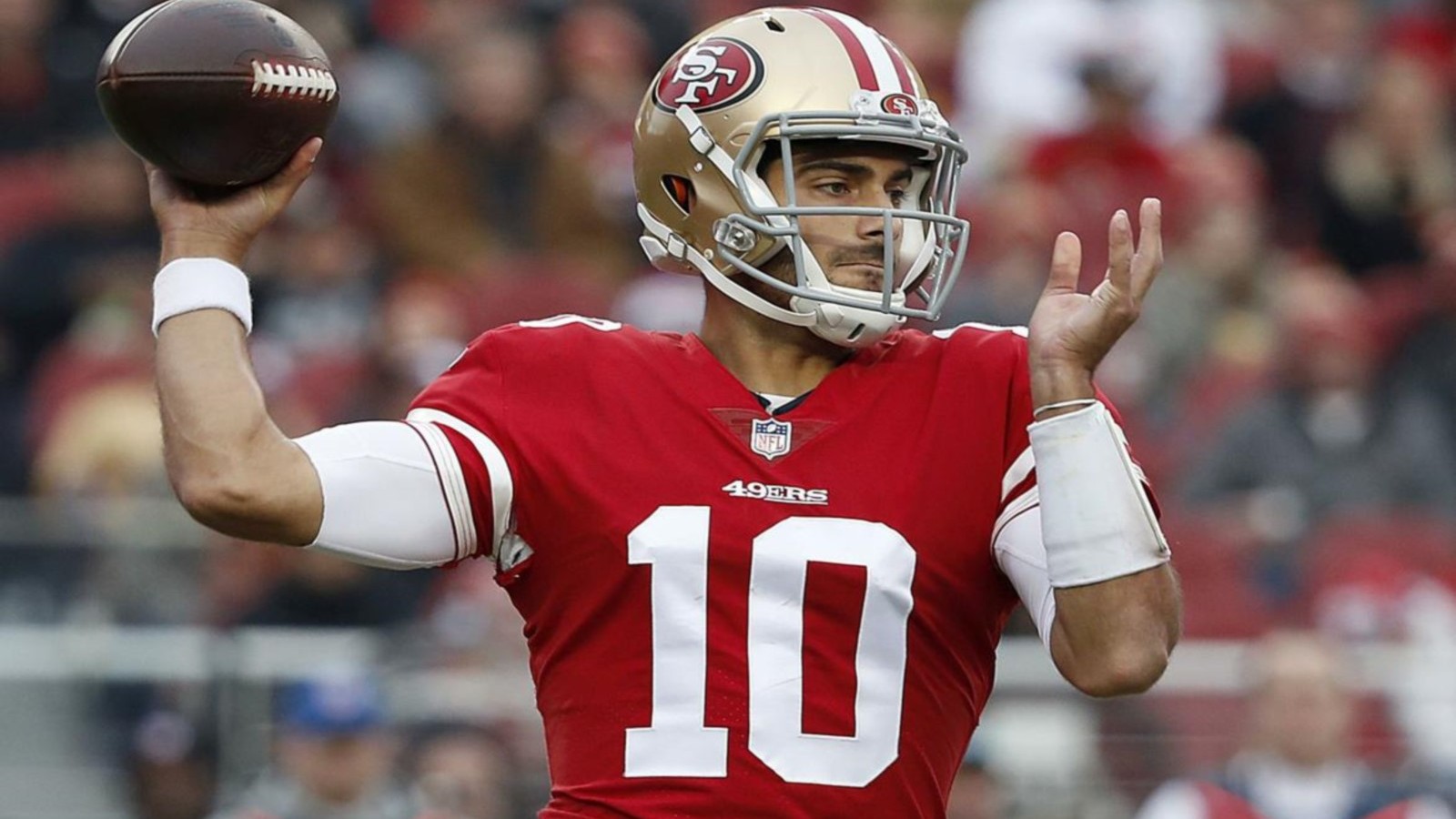 We are less than a week away from most teams starting training camp and in a lot of cases the hype train is huffing and puffing down the tracks at full steam. Coming out of OTAs we always hear about all the players that displayed “great” talent, all while rocking shorts and tshirts.

As fantasy owners we have to dig through all the fodder and try to determine which players will live up to the hype and which ones won’t, especially if you are already drafting. Drafting before training camp can give some an upside if they feel they have a good handle on these players, while others believing the hype can be in big trouble by the time the season rolls around.

So let’s see who believes what by jumping right into the responses from yesterday’s Twitter Question of the Day:

Who is one player that is being hyped everywhere that you don't trust and why?

@Kingshowtime44 – Jerick McKinnon. I've yet to see it consistently from him. Big contract has everyone hyped up. But he's been a committee back his whole career.

@ShanePHallam - Joe Mixon. He was woefully ineffective last year and gave way to Bernard, even in rushes. Mixon is living off of his “college film” hype (and that was overhyped too). I think the Bengals will be more 50/50 than 75/25 and Mixon will disappoint.

@FFStompy - Randall Cobb. He hasn't been healthy since 2015. He was also seen in a walking boot during OTAs. He also only had one great season and one good season. Everything else has been meh. Oh, and they drafted 3 WRs, already have Adams and Allison, and Ty Montgomery has taken over the role that Cobb once played.

@CaptainKohana - Jimmy Garoppolo - he'll be fine and will likely approach 4K passing yards, but given the depth at QB and Jimmy G's complete lack of supplemental rushing yardage (and lousy TD rate to date), there's just no reason to take him at his ADP. So many equal/better options several rounds later.

@TonyLLerenas - Saquon Barkley, everyone expects him to be a Top 3 RB by end of season, hype too Big.

@joshbrickner - In dynasty, I would be hesitant to trust Jimmy Garappolo. However, I'm taking him where available in redraft. He should both stay clean and have a great season as next off-season is his last chance to get paid.

@WATOffb – Saquon Barkley. He’s on our avoid list. Probably ends up good enough to disqualify as a bust but that draft price is just too high!

@FFAcumen - Not that much hype but Jarvis Landry is being drafted way higher than he should. Always been a volume guy but it won’t be there this yr.

@KizK20 - Dalvin Cook. He looked fabulous through a few games, but is now coming off of a major surgery. Contract early in off-season for Latavius Murray shows the team’s commitment. Diggs, Thielen, Rudolph, Murray, and Cook are a lot of mouths to feed.

Angelo Lilas - Not sure he’s being overhyped but Alex Collins is a buster in the making. Just remember Justin Forsette a couple years ago.. buyer beware fools gold.

@JorgeAmezquita7 - Sammy Watkins. Because he is always feast or famine!!

@BlitzYoTitzOff – Rashaad Penny. Bad O-Line, similar stats and from same team as Donnell Pumphrey...plus Chris Carson is no slouch when healthy. Avoid Penny if you can.

@stayfunlako – Alvin Kamara, I think he will still be good, but not what people are hoping. No way he can keep up the TD rate and yds per touch rate that he had last year.

Brad Ellsworth Two players come to mind, 1A and 1B ... I'm going with Josh Gordon, WR Browns. Why? Because he's Josh Gordon and a Brown. Dude has all sorts of potential, but I don't think his head is screwed on right. 1B - many won't like this, but I'll go with Jimmy Garoppolo. Yes, he had a really nice 2017, but something tells me he's going to be drafted entirely too high for what he produces in 2018.

@Full10Yards - Kenyan Drake. His ADP is way too high for a team that’s worse than middle of the pack. Also backfield is crowded with Frank Gore and Kalen Ballage, and never having a full workload consistently.

@ucswais - Allen Robinson. I don’t doubt the upside but so many things need to go right for him to hit where he’s going. New team, new staff, off injury... lotta faith being shown in a guy with 1 thousand yard season ever.

@DFFMemphis - Jerick McKinnon. He’s never had more than 203 touches in a season. He’s not a bellcow back, although I see him as a nice RB in the 12-15 range on the season. His stock will never be higher, it’s just too high for me. Also think Matt Breida will be involved. Pass at current ADP.

@Cmorell72 - Jimmy Garoppolo. He threw 7 TDs in 5 starts last year and not only was it a small sample size for where he’s being drafted, but those numbers were nothing to be excited about anyways.

@ChappellBros – Jerick McKinnon. 3rd round value just seems so high with what he did for the Vikes. Is he really a 3 down back?

@NFLDraftTalker - Rashaad Penny and Royce Freeman. Everyone is assuming a massive workload and I just don’t see the talent forcing that kind of volume.

Editor’s Note: Who is hyping Wilkins and Ballage, point them out to us…

@mggoilers - Mitch Trubisky. Playing QB is hard, and he had limited playing experience going into his rookie year. Now he’s learning a new system and players. Adjustment/learning curve might be season long.

@FantasyBuddha – Allen Robinson. I love the guy, but I don't think Trubisky is ready to support a fantasy WR1 and I'm reticent to buy in 100% on Robinson's health, even with the extra recovery time. Guys just aren't typically the same that following season.

@JimCovFootball – JuJu Smith-Schuster- I really think the loss of Todd Haley will have a negative impact on that offense. He really was great at deploying weapons and I don't trust the promoted QB coach to do the same.

@egGoodSports - I'm gonna catch some crap for this one.... Odell Beckham Jr.... oft injured... questions about the offense.... not saying he wont be good because he will be... but first round good?? Even top 15 good.....? I’m thinking not this year. Yes i am aware this is a contract year. #6 wr.... #boldprediction

@Paul_Ryan15 - Doug Baldwin. I understand SEA will probably be playing from behind quite a bit in 2018 and WRs tend to benefit the most from that. However, when you look at Baldwin’s week to week production over his career , he's about as inconsistent as they come.

A lot of solid opinions here and just shows that even when many are hyping a player there are still doubters out there and that’s what great about this game. If we all agreed on the same players fantasy football would be dead by now.

There are definitely a few players listed here that I have serious doubts about but two really stand out; Jerick McKinnon and Jimmy Garoppolo.

McKinnon finished 18th in PPR scoring last year in Minnesota as backup to Dalvin Cook, but when Cook went down in Week 4, McKinnon was asked to do more. And more he did, at least in weeks 5-8.

He had his best week of the season in Week 5 against Chicago with 146 totals yards and a TD. Over the next three games he added 248 total yards and three more TDs. But then over the team’s last 8 games he only surpassed 60 total yards one time and only scored one more TD. He also only averaged 3.8 yards-per-carry for the season, but did better as a receiver, catching 51 balls for 421 yards.

Most assume that now that he has moved to San Francisco and the 49ers lost Carlos Hyde to free agency, that McKinnon will get the most touches. He is currently being drafted in the middle of round two as the12th RB taken and that is just ridiculous to me. He has never had more than 202 touches in a single season and that pales in comparison to anyone who is a bellcow back.

Don’t get me wrong he could finish as a top 12 RB, but that will have to be on the back of his receiving skills. If he can catch 70 balls and score a few TDs, then yes he can hit that mark, but if he falls short of that, then the risk is just not worth it at that point.

As to Garoppolo, ARE YOU FREAKING KIDDING ME??? He is currently being drafted as the 6th or 7th QB off the board and that is ridiculous. The fact that he is coming off before established perennial top 12 QBs like Stafford, Roethlisberger and Rivers is a perfect example of people wanting the shiny new toy. Until he throws more TDs and less interceptions, he just can’t be counted on this highly.

Sometimes the old rust bucket will get you there and be a lot more comfortable while doing it.