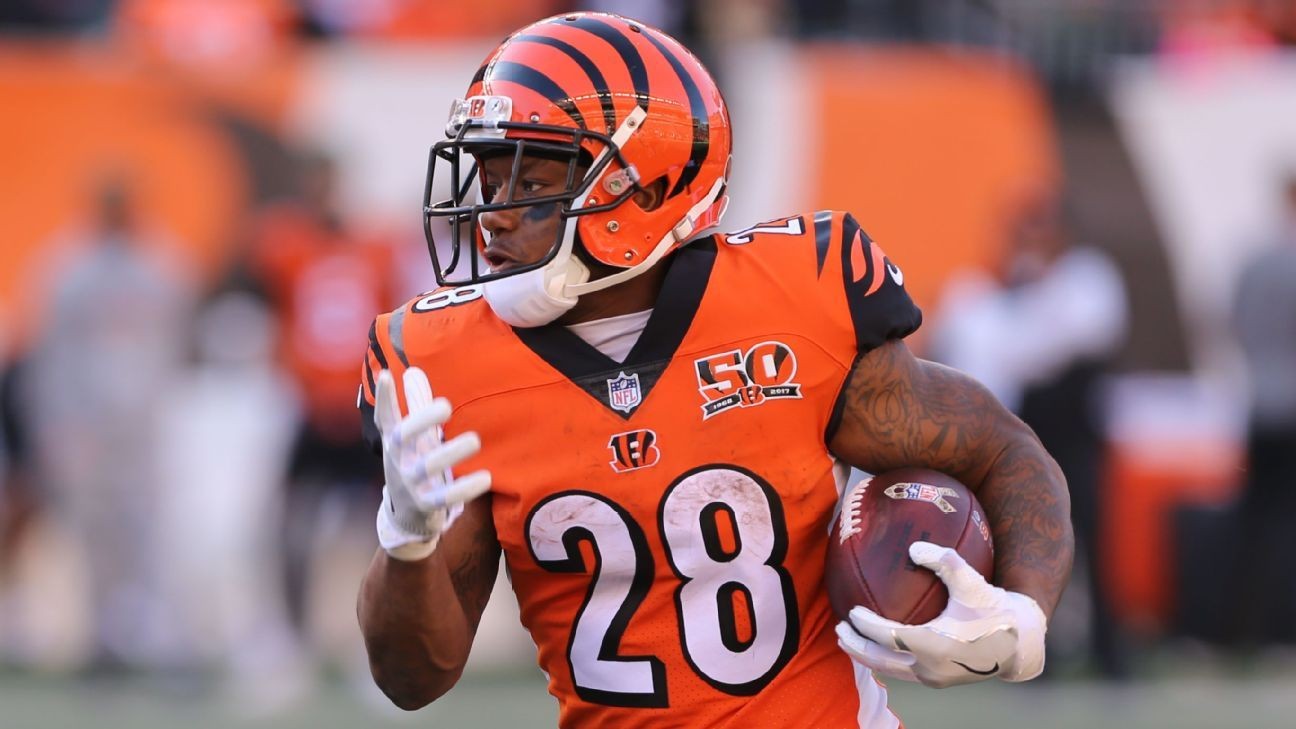 So far in 2019, the consensus top four picks of every fantasy draft have been Saquon Barkley, Ezekiel Elliott, Alvin Kamara and Christian McCaffrey.  After those four, it's anybody's guess who the 5th overall pick should be.  As of right now, I have taken and will continue to take Joe Mixon at 5th overall ahead of Melvin Gordon, Todd Gurley, Le'Veon Bell, David Johnson, James Conner, Nick Chubb and Dalvin Cook, even though Mixon's ADP has him as the 9th RB off the board.  I would even take Mixon over some of the elite wide receivers such as DeAndre Hopkins as well who has an ADP of 5th overall.  Whenever I draft Joe Mixon in the top half of the first round, the phrases, "too aggressive" or "too early" are used by others participating in the draft.  My thought on that is, if you want him, and that's your pick, then why not go get Mixon at 5th overall if you know you won't get him in the second, especially if you think he will outperform his current projection.

In evaluating whether it's a good decision to draft Joe Mixon that early, let's first focus on the positives associated with Mixon.  Mixon is young (22 years old) and entering the prime of his career.  Mixon can catch the ball and was actually rather underutilized in the passing game during his first two seasons with the Bengals.  Mixon has kept himself out of trouble since getting drafted by the Bengals.  Zac Taylor is an offensive mind that will get the running game going.  Tyler Boyd has emerged as a threat and with AJ Green back in the fold, teams won't be able to stack the box against Mixon.  Finally, the Bengals drafted Jonah Williams to be their new left tackle and they are getting Billy Price back from injury, which greatly improves their offensive line from 2018.  All signs point to Joe Mixon having a great season in 2019.

Yes, Joe Mixon has a lot going for him this year, but part of my logic in taking him 5th overall are the negatives associated with drafting the other running backs at that spot.  According to FANTASYPROS, Melvin Gordon is the 5th running back off the board.  Gordon is talented but he's only had one season in his four year career where he averaged over 4 yards per carry, and that was 2018.  Gordon has also been unable to play a full 16 games in 3 of his 4 seasons in the league.  Melvin Gordon has started to grow on me over the last few years, but his injury issues give me pause.  I don't want to have pause about my first round pick, let alone the 5th overall pick.  I understand Mixon has missed 2 games in each of his first 2 seasons, but the injuries have been minor.

Todd Gurley has an ADP of 13th overall as the 8th RB off the board.  Similar to Gordon, Gurley's knee issues need to give you pause.  Gurley will be great this year even with a reduced workload, but buying Gurley is kind of like buying a house with water damage in the basement.  Would you buy a house you like with water damage in the basement if there's one down the street without any water problems? The answer is yes, now just translate that to a knee problem with a running back you're drafting for your fantasy football team and go from there.  If you draft Gurley you will be worried about his knee all year long, and if he doesn't get volume any given week you will need him to score in order to come through for you.

Le'Veon Bell didn't play football in 2018, and you should not underestimate the significance of that.  I am a coach.  As a coach, I question Le'Veon Bell's desire to be out there on the football field as a competitor after he walked away from $14.544M in 2018 and opted not to play football.  I don't doubt his abilities, but I really question how he's going to perform now that he has his money in his pocket - that's simply my feeling.  The Jets offensive line is no where near as good as the Steelers' and their supporting cast, including their quarterback, falls short of the Steelers' as well.  Robbie Anderson and Jamison Crowder are not the same as Antonio Brown and JuJu Smith-Schuster.  Teams may load up the box to stop Bell, and that's concerning.  Bell's replacement, James Conner, did well in Bell's absence last year but the Steelers lost their HOF offensive line coach, Mike Munchak and arguably the best wide receiver in the league, Antonio Brown, this offseason.  I question how effective Conner is going to be without the presence of Brown and Munchak, it's a concern.

David Johnson has been the 6th running back off the board so far in 2019 which is a little concerning to me.  I understand that Kliff Kingsbury is supposed to bring an offense to Arizona that will be better than any other offense we have even seen in the history of offenses, but one thing remains...the Cardinals offensive line is not good and although they did make an effort to improve it during the offseason by adding JR Sweezy, Marcus Gilbert and Desmond Harrison, you have to wonder if that was enough.  You also need to wonder if D.J. Humphries, a former first round pick, will ascend.  I understand that David Johnson offers a lot in the passing game, but if he cannot run for more than 3.6 yards per carry in 2019, it could be a frustrating year if you take Johnson at 5th overall.

If you don't want to take one of the aforementioned running backs at 5th overall, there are several wide receivers consistently being drafted in the first round this year near where Mixon has been going in drafts.  These receivers include DeAndre Hopkins (309.36 projected points), Davante Adams (304.98 projected points), Julio Jones (304.68 projected points) and Michael Thomas (293.25 projected points).  You could always opt to draft a wide receiver at 5th overall and follow that pick up with a running back in the 2nd round.  Some of these second round running backs include Nick Chubb who will be the man this year...until Kareem Hunt gets back from his 8 game suspension, then who knows what will happen.  Dalvin Cook is poised for a breakout in 2019, especially after the Vikings improved their offensive line in the offseason, but the knee and hamstring injuries do provide question marks.  Finally, Damien Williams' ADP has crept into the tail end of the second round, and that just seems odd to me given his small track record as a starter.

If you forego taking a stud wide receiver at 5th overall, opting instead to select Joe Mixon from that spot and take a high end wide receiver in the 2nd round, you will possibly be looking at drafting a combination of Joe Mixon and Mike Evans ( 266.73 + 289.04), Joe Mixon and Odell Beckham Jr. ( 266.73 + 292.8) or Joe Mixon and Keenan Allen ( 266.73 + 260.94).  Drafting Mixon and following him with one of the three aforementioned stud receivers would get you between 527.67 and 559.53 combined projected points between the two players on the season, but if you think Mixon will exceed his projection like I do, that combination come through with much greater value.

Obviously, I am an advocate of drafting Joe Mixon as early as the middle of the first round.  However, just because I advocate for it doesn't mean it's what you should do.  I want to come out of the first two rounds of the draft with at least one stud running back and I have reasons not to like the other running backs being drafted around Mixon.  You need to ask yourself a series of questions in evaluating who you want to take if you draft 5th overall.  How do you feel about David Johnson, Melvin Gordon, Le'Veon Bell or James Conner? If you don't agree with my evaluation of the risk associated with drafting those guys, then roll with them and draft them.  You also need to ask yourself what the best possible combination you can get with your first two picks.  Do you feel better about going Mixon/Evans or Hopkins/Fournette? Do you feel better about going Mixon/Allen or Hopkins/Chubb? Would you prefer Mixon/Evans or Hopkins/Freeman? Before your draft you should experiment with different comibinations in mocks and see how you feel afterwards.  At the end of the day, it's your decision, but in my view, for all of the reasons stated above, if you do draft Joe Mixon as early as 5th overall, you are making a good decision.