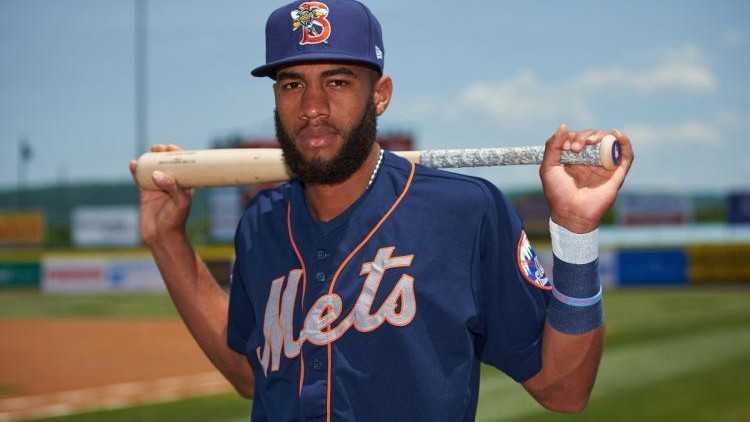 We got some bad news this week as one of our top prospects suffered a season ending injury. Hopefully the Yankees fans can get over the loss of Gleyber Torres, but Chase Headley can breathe a little easier as he doesn't have to look over his shoulder, waiting for the rookie to take his job. How did some of the other top prospects performed this week? Let's find out in this week's Report Card!

If he can get the K rate down, Yoan Moncada will be an absolute beast.

Yoan Moncada, 2B Chicago White Sox. We know what we are going to get from Yoan Moncada. This week he went nine for 25 with a home run, five runs batted in and scored six times. He has a good bat, but he struck out another eight times and K's are still an issue with him. He did add seven walks this week, so hopefully that's a good sign he working on his patience/plate discipline. Overall though, there is still much more good than bad and hopefully we see Moncada in Chicago before too long.

Austin Meadows, OF Pittsburgh Pirates. It was a shortened week for Austin Meadows as he played in only three games, so it's a shortened sample size in Week 11. He only managed one hit in 12 at bats, but that hit was a home run. I guess that helps a little. Meadows can still use a some time in Triple-A, but with the Pirates going nowhere, I think we will see Meadows in Pittsburgh sometime this summer.

Amed Rosario, SS NY Mets. I'm not sure how in the hell Amed Rosario still isn't playing in New York. He's playing well, the Mets have both Asdrubal Cabrera and Neil Walker on the DL, so they have a need, and they need to win games. What the eff is the holdup??? This past week wasn't the best week for Rosario, as he only hit .231, but he did add a home run, five RBIs and a steal. He has nothing left to prove at Triple-A and I wouldn't be surprised if he graduates from my Report Card by the time the next one rolls around.

Gleyber Torres, SS NY Yankees. We received some bad news on Monday, as it appears Gleyber Torres has a torn UCL in his left elbow and will be forced to have Tommy John surgery, forcing him to miss the rest of this season. While he still remains a very valuable player in dynasty/keeper leagues, he can be dropped ASAP in all redraft leagues.

Rhys Hoskins, 1B Philadelphia Phillies. Well, I have some good news and some bad news. The good news is that Rhys Hoskins added another home run to his total and he now has 15 on the season. The bad news is that Tommy Joseph is currently in the midst of a 14 game hit streak for the Phillies, so there is no need to rush Hoskins along. While he did smack a homer, he only went four for 22 (.182) last week. His season batting average is still .287, so I'm not too concerned, but while Joseph is raking, I think Hoskins will get more seasoning in Triple-A.

Jose De Leon, Tampa Bay Rays. Once again, we see Jose De Leon sidelined with an injury. He missed time at the beginning of the season with a forearm injury and now is out with a mild lat strain. It doesn't look like he will miss an extended amount of time, but it's unfortunate to see him out when so many prospects are getting the call up to the Majors.

It's getting warm in Tampa Bay, but Brent Honeywell's game has been almost as hot.

Brent Honeywell, Tampa Bay Rays. Here we go! Brent Honeywell has now had his second consecutive, great game in a row. Two weeks ago he only gave up one run over six innings, while striking out nine batters, and this past week he pitched six shutout innings, while striking out seven. He must be inspired by the way Jacob Faria is performing in Tampa Bay, and if he can string together a few more good outings, maybe we will see him in the Tampa rotation sooner rather than later.

Lucas Giolito, Chicago White Sox. We saw another typical performance from Lucas Giolito this past week. He went 4.2 innings and gave up three earned runs on five hits and four walks. He is anything but consistent, and it's quite the journey following this guy on a week to week basis.

Michael Kopech, Chicago White Sox. It's been a rough few weeks for the youngster, Michael Kopech as he had his second bad performance in his last three games. This week he earned a loss in four innings of work, while surrendering five runs on five hits and four walks. He wasn't even able to show off his strikeout abilities, as he only struck out three batters. He just turned 21, so we need to keep that in mind as we see him have these ups and downs.