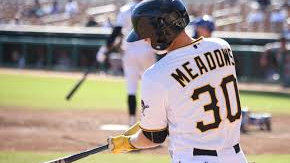 First, I would like to apologize for the tardiness of this week's Minor League Prospect report. Due to formatting issues and obligations, it just wasn't in the cards to get posted earlier, so I offer up a sincere, "I'm sorry".

With that being said, it's time to take a look at how your favorite Minor League players performed last week, and slap a big ol grade on 'em. Let's see how they're doing!

Yoan Moncada, 2B Chicago White Sox. Yoan Moncada looked to build upon a hot start for the Triple-A, Charlotte Knights, but unfortunately he fell a bit short. He had five hits in 21 at bats (.238), with a home run this past week, but he struck out eight times in those 21 at bats. His batting average fell from .400 to .317 over the course of this week, which isn't too shabby, but I would like to see fewer strikeouts from Moncada.

Cody Bellinger is so dreamy, isn't he???

Cody Bellinger, 1B Los Angeles Dodgers. I seem to be falling further and further in love with Cody Bellinger. Week 1 was fantastic for the Dodgers, future first baseman (or temporary outfielder), and he kept things rolling in Week 2. This week he went nine for 26 (.346) with two dingers and eight RBIs. You know that you're playing well when you hit .346 for the week and your batting average on the season goes DOWN. He also stole three bases, so he's helping on all fronts. Like Moncada, Bellinger is having a little problem with the "whiffs" as he struck out nine times in his 26 at bats, and that is the only thing holding him back from earning a solid A.

Ozzie Albies, 2B Atlanta Braves. Ozzie Albies isn't going to be a guy that you will be able to count on for power, but he should be able to be a consistent performer in batting average, runs and stolen bases. He showed that off this week as he went 10 for 30 (.333), scored six times and stole two bases. He also chipped in six runs batted in, and while he didn't hit any home runs, I'm not going to knock him down for that, since that isn't expected. With Albies hitting safely in his last ten games, he's bringing much needed optimism to Braves fans.

Austin Meadows, OF Pittsburgh Pirates. With the big news coming out this week that Starling Marte is suspended for 80 games, everyone will be speculating as to when we will see Austin Meadows in the steel city. Well, Pirates GM Neal Huntington stated that Meadows isn't ready yet, so that role will likely remain with Adam Frazier until the rookie is ready. After an abysmal performance in Week 1 (one for 14 at the plate), Meadows was a little better in Week 2, as he went five for 19 (.263) with one home run and five RBIs. He's still not where we would like to see him, but he's starting to show signs of life.

JP Crawford, SS Philadelphia Phillies. The Phillies have high hopes for rookie shortstop, JP Crawford, but so far in Triple-A, it looks like he's starting this season on a coffee break. Last week, Crawford had two hits in 20 attempts and that puts his season batting average at .086. He's failed for the second week in row.

Lewis Brinson, OF Milwaukee Brewers. Lewis Brinson returned this week from a sprained finger and played in four games. He hit safely in all four of those games and went five for 20 (.250), chipped in a home run, an RBI and four runs. It's still a small sample size, but it's encouraging what we are seeing so far from Brinson.

Julio Urias, Los Angeles Dodgers. One thing that we want to see from Julio Urias, is that he doesn't rack up a lot of innings. His fantasy baseball value is tied to him saving those innings for when he gets the call back up to the Dodgers later this summer. He pitched 3.2 innings in his first start, and was extended to 4.2 innings in his second game. In those four plus innings, Urias gave up one earned run on four hits with two walks, while striking out four. He now has nine total strikeouts in 8.1 innings and looking like he's getting into form, while not wearing down that precious arm.

Lucas Giolito is off to a rocky start for the White Sox.

Lucas Giolito, Chicago White Sox. Lucas Giolito is now throwing in the high 80's/low 90's, compared to the mid 90's like he used to. What I'm hearing is that he's working on his control, but after his pitiful performance last season that is carrying into this year, I'm a bit skeptical. This past week, he had one start and gave up three earned runs on three hits and four walks, while striking out four. In his two starts, he has pitched 8.1 innings and has a 7.56 ERA with nine hits and six walks. He needs to do better.

Jose DeLeon, Tampa Bay Rays. Jose Deleon is a top pitching prospect for the Rays, but still hasn't made his first start due to pain in the flexor mass muscle in his forearm.

Brent Honeywell, Tampa Bay Rays. Brent Honeywell fanned 12 batters in his only start in Week 1, and many were wondering if he could look good in his second start. Well, he didn't disappoint, as he went seven innings, giving up only one run, while striking out eight. He did walk three batters, but it's hard to imagine a better start for Honey-bunches of goodness.

Josh Hader, Milwaukee Brewers. Brewers prospect, Josh Hader had two starts this week, and is showing some good and bad. In his first start, he only lasted a little over three innings as he gave up three runs on five hits and two walks. Yuck. He rebounded a bit in his second as he only gave up one run on one hit while fanning five. He gave up four walks walks which is a bit concerning and he now has an equal amount of walks versus strikeouts on the season (11). He still has some improving to do.