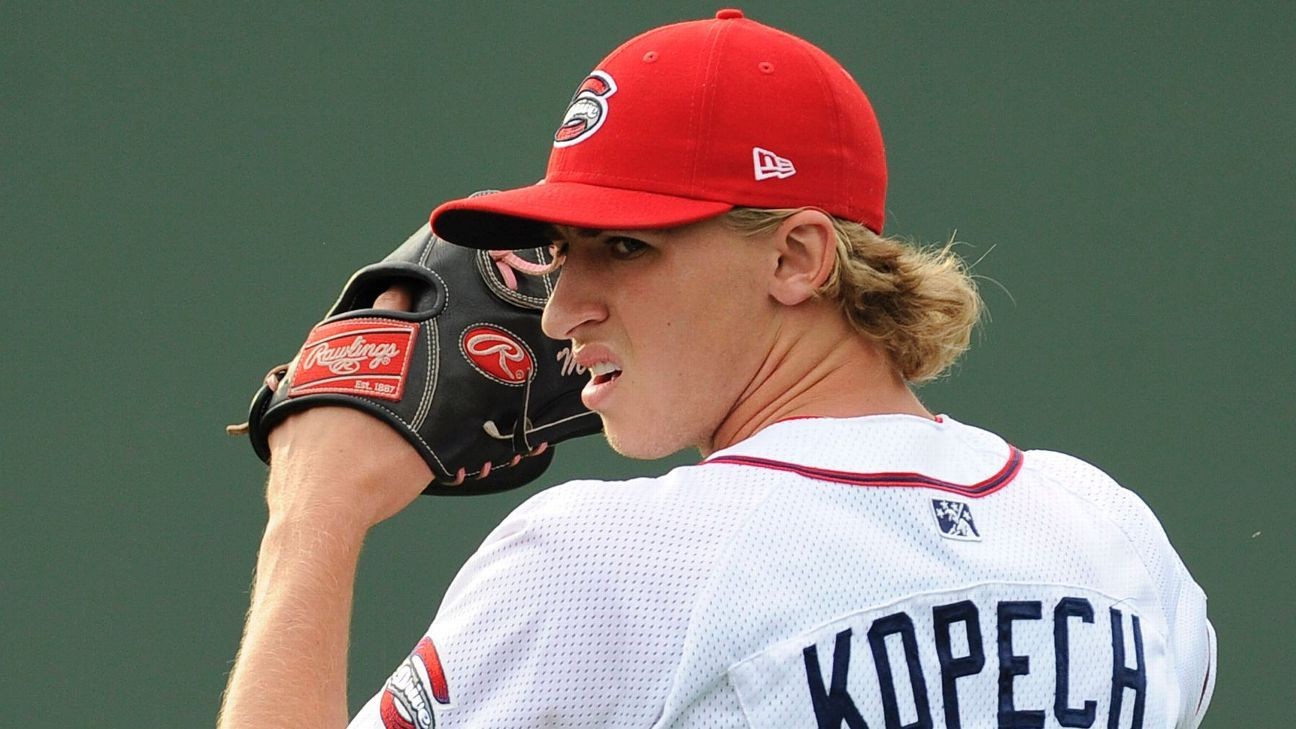 Damn it's hard to keep track of all the prospect movement this time of the season, as two prospects that were on my report last week were promoted to the Big Leagues. Rafael Devers was given the call to Boston, while Derek Fisher is now residing in Houston. Will we see any more players get the call this week? With the MLB Trade Deadline being less than a week away on July 31, I wouldn't be surprised if a few more youngsters saw a promotion in the near future. Who might that be? Well read on and find out!

Ozzie Albies, 2B Atlanta Braves. 7-30 (.233), 2 HR, 2 RBI, 4 R, 0 SB. While he didn't hit for great average this past week, the two home runs were a very nice bonus since Ozzie Albies isn't known to be a power hitter. While I think it may still be a month or so before we see Albies in Atlanta, it will be important to monitor the Braves moves at the trade deadline to see if they are going to make room for him.

Rhys Hoskins, 1B Philadelphia Phillies. 6-28 (.214), 2 HR, 5 RBI, 5 R, 0 SB. I am purely speculating here, but with Rhys Hoskins waiting patiently in Triple-A for his opportunity to shine in Philly, I think Philadelphia will make every effort to move the less talented, Tommy Joseph before the trade deadline. If you are in need of a power hitting first baseman, you may be well served to add Rhys Hoskins to your fantasy baseball roster right now.

Scott Kingery, 2B Philadelphia Phillies. 6-27 (.222), 1 HR, 6 RBI, 4 R, 1 SB. A new addition to this list, Scott Kingery is currently hitting .283 on the season with five home runs, 14 RBIs, 16 runs and seven stolen bases in 24 games for the Phillies' Triple-A affiliate. The Phillies are expected to be sellers at the trade deadline, so if the right pieces are moved, we could see Kingery in Philadelphia before we know it.

Amed Rosario, SS NY Mets. 2-5 (.400), 0 HR, 1 RBI, 1 R, 0 SB. It was a rough week for Amed Rosario as he missed all but one game due to a stomach bug. He is now back however, and Jon Heyman of FanRag Sports is reporting that Rosario may get called up in the next "week or so". Considering he should have been a Met a month or so ago, his presence in New York is well overdue.

Brendan Rodgers, SS Colorado Rockies. 7-32 (.219), 1 HR, 2 RBI, 4 R, 0 SB. While he may be one of the best hitting prospects in the Minor Leagues, Brendan Rodgers still has more to prove before he gets promoted to Colorado. While he has five home runs in 27 games for the Double-A Hartford Yard Goats, he is only hitting .262. Yeah, that really is the name of the team he plays on as well. I love Minor League Baseball!

Lucas Giolito, Chicago White Sox. 1 GS, 1.2 IP, 5 ER, 5 H, 3 BB, 3 SO. Lucas Giolito is looking to take a mulligan after this past week as he gave up five runs in less than two innings. This guy is all over the place and is proving that when (or if), he gets the call to Chicago, he can't be trusted.

Brent Honeywell has followed up his MVP performance at the Futures game with two fantastic outings.

Brent Honeywell, Tampa Bay Rays. 2 GS, 10 IP, 2 ER, 7 H, 3 BB, 16 SO. Out of all the pitching prospects listed on my report, I think Brent Honeywell is the most likely one to get the call up to the Major Leagues first. After two more fantastic outings this past week, Honeywell is running out of things to prove in the Minors.

Michael Kopech, Chicago White Sox. 1 GS, 8 IP, 0 ER, 4 H, 0 BB, 8 SO. Dayummm Duuude!!! Michael Kopech is making a statement, as he pitched eight shutout innings, striking out eight and not issuing a walk. He now has 114 whiffs in 92.1 innings, and it's about time we see what he can do in Triple-A.

Reynaldo Lopez, Chicago White Sox. 1 GS, 6 IP, 1 ER, 2 H, 1 BB, 6 SO. Talk about impressive. Reynaldo Lopez has dominated over his last five starts for the Triple-A Charlotte Knights, as he's only given up six earned runs on 39 strikeouts versus six walks, in almost 32 innings. Of the three White Sox prospects listed on this report, I would be very surprised if Lopez weren't the first one we see in Chicago this season.

Yohander Mendez, Texas Rangers. 1 GS, 7 IP, 0 ER, 4 H, 2 BB, 9 SO. It doesn't get much better than this as Yohander Mendez pitched seven innings of shutout baseball, while striking out nine batters. He now has gone at least seven innings in consecutive outings while fanning a total of 17 batters. I wouldn't be surprised if Triple-A comes calling very soon.