While the MLB "Hot Stove" as it is frequently referred to was quite cold this offseason, there were still plenty of offseason moves worth noting. When a player moves teams in baseball, it can potentially have more of an impact than in any other sport. Factors to consider when a player switches uniforms include things such as:

Let me help you sift through all this information and try to give you a better handle on what we can expect from players switching teams this year. Today I will breakdown the major moves among the American League teams. Enjoy! 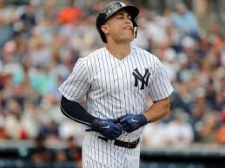 Last year Giancarlo Stanton hit 59 home runs for the Miami Marlins, but in their movement to rebuild, the slugger was moved to the Yankees. This is a move that is not only great for Stanton, but great for fantasy owners as well. Even if a player hits 50+ home runs in one year, it's not very often that i would predict a repeat performance, but for Stanton, I'm going to make an exception. He is moving from a park that has a home run factor for righties that is well below average in Miami, to one that is well above average in New York. Health is always a concern with this guy, but if healthy, he could honestly push for 60 home runs again this season.

While it may have taken awhile, JD Martinez finally found a new home in Bean Town, playing for the Red Sox. Martinez was on a tear last season as he exploded for career highs in home runs (45) and runs batted in (104), while hitting .303 on the season. Can he repeat that performance in his new home? While the Green Monster makes Fenway one of the most favorable parks in the Majors for doubles for right handed batters, it's well below normal for right handed home runs. According to Baseball Monster park factors, Fenway produces about 12 percent less homers than the average park for righties, while his (partial) home from last year in Arizona is eight percent better than normal. I wouldn't be surprised to see him in the 35-40 home run range, but when you consider he hits in the middle of a great lineup and should be in line for a boat load of opportunities to score and bat in runs, as well as hit around .300, and Martinez makes for a very nice second round pick.

Dee Gordon is sticking his tongue out at all those fools who try to throw him out.

If you want to bet on a guy that will steal the most bases in MLB this season, I'm putting my money on Dee Gordon...may Trea Turner and Billy Hamilton be damned! Gordon has moved from playing second base in Miami to Seattle where he will be manning center field. Will the change in teams and position effect his offensive production? Not likely. He will be hitting leadoff with guys like Jean Segura, Robinson Cano, and Nelly Cruz hitting behind him, so he should be able to round the bases frequently. Miami and Seattle have been similar in team stolen base totals, so I don't foresee a lack of aggressiveness when it comes to giving Gordon the green light to steal. He's a three category guy that will help you in batting average, runs and steals, but give you virtually nothing in home runs and runs batted in. Expect to see similar production from Gordon in his new home.

Last year was a year that we saw many batters take a new approach at the plate, and Logan Morrison was a primary beneficiary of the movement. Only once in his career had he topped 20 home runs in a season (23), yet last year by increasing his launch angle, he posted a career high 46.2% fly ball rate and pounded out 38 dingers for the Rays. While Target Field in Minnesota is slightly worse than Tampa as far as home runs for lefties, Morrison is in a good situation with talent hitting around him and should be able to produce nice counting stats. He's not going to win you the batting average category, but 30 home runs with a decent amount of runs and runs batted in, makes Morrison a decent option to fill your corner infield position.

Ian Kinsler, LA Angels. At 35 years old, Ian Kinsler isn't getting any younger, but he's one of the hardest workers in the game and still has 20 home run/10 steal potential while hitting leadoff for an improved Angels offense.
Yonder Alonso, Cleveland Indians. Yonder Alonso was one of the players who tweaked their swing last year and it paid off as he hit 28 home runs. Progressive field in Cleveland is a more favorable home run park than he saw in Oakland, so I expect a repeat in his power totals.
CJ Cron, Tampa Bay Rays. He has yet to see over 445 plate appearances in a season, but that looks to change in Tampa which could allow Cron to flirt with 30 dingers.
Lucas Duda, Kansas City Royals. Kansas City is not a favorable ballpark for left handed batters, and with the putrid lineup surrounding Lucas Duda, I wouldn't recommend drafting him in anything but the deepest of drafts.
Randall Grichuk, Toronto Blue Jays. While the outfield may be a little crowded in Toronto, if Randall Grichuk finds regular at bats, the slugger may find new life in a new town.

Shohei Ohtani has a ton of hype behind him, but he also has the stuff to justify it.

I don't know if there has ever been a player with as much hype entering the league as Shohei Ohtani. Not only can Ohtani throw 100 miles per hour, but he can hit a ball 500 feet and has amazing speed as well. Honestly, I think they are crafting his bust at Cooperstown as we speak. The Angels have stated he will be a pitcher-first this season and serve as occasional designated hitter. For fantasy purposes, let's take a peek under the hood of his pitching repertoire.

In 2016, Ohtani had a recorded max fastball of 102 miles per hour, with an average fastball velocity of 97.5. That would have ranked him among the top three among starters last season. Not only is his fastball amazing, but he has a downright nasty splitter to go with a very good slider, so he can keep batters on their toes. On Sirius XM radio, former MLB GM Jim Bowden, who has direct access to current general managers, says that it's near consensus opinion among current GM's that Ohtani has better stuff than other Japanese imports such as Yu Darvish and Masahiro Tanaka. Factor in that you may be able to get some hitting production from him depending on your league/site setup, and there is definitely a lot of reason for optimism. As long as the hype doesn't drive up his draft value too high, I'm all aboard the Ohtani train in 2018. His average draft position among many sites is roughly in the 70's, so in a 12-team league that would make him a seventh round pick. Sign me up for that all day!

The Astros made a splash this offseason as they bolstered their rotation and acquired Gerrit Cole from the Pirates. Cole is going to a much better "real life" situation, but I think it is also a great move for him for fantasy as well. He has great velocity, but he really struggled with his fastball last season. Those fastball issues caused Cole to really struggle with home runs as he surrendered 31 bombs in 2017, which was tied for sixth worst among qualified pitchers. He now departs PNC Park in Pittsburgh, which according to BaseballMonster.com, gives up 18 percent more home runs than the average park, to Minute Maid Park in Houston, which gives up 11 percent fewer home runs than normal. The Astros like it when their pitchers attack with off speed pitches, so I think a likely change in his pitch mix will help improve his overall performance as well. He will be facing the DH this season, but when considering his ballpark change, new pitching coach tendencies, and likely more offensive support, I think Cole makes a very attractive SP2 in fantasy this season.