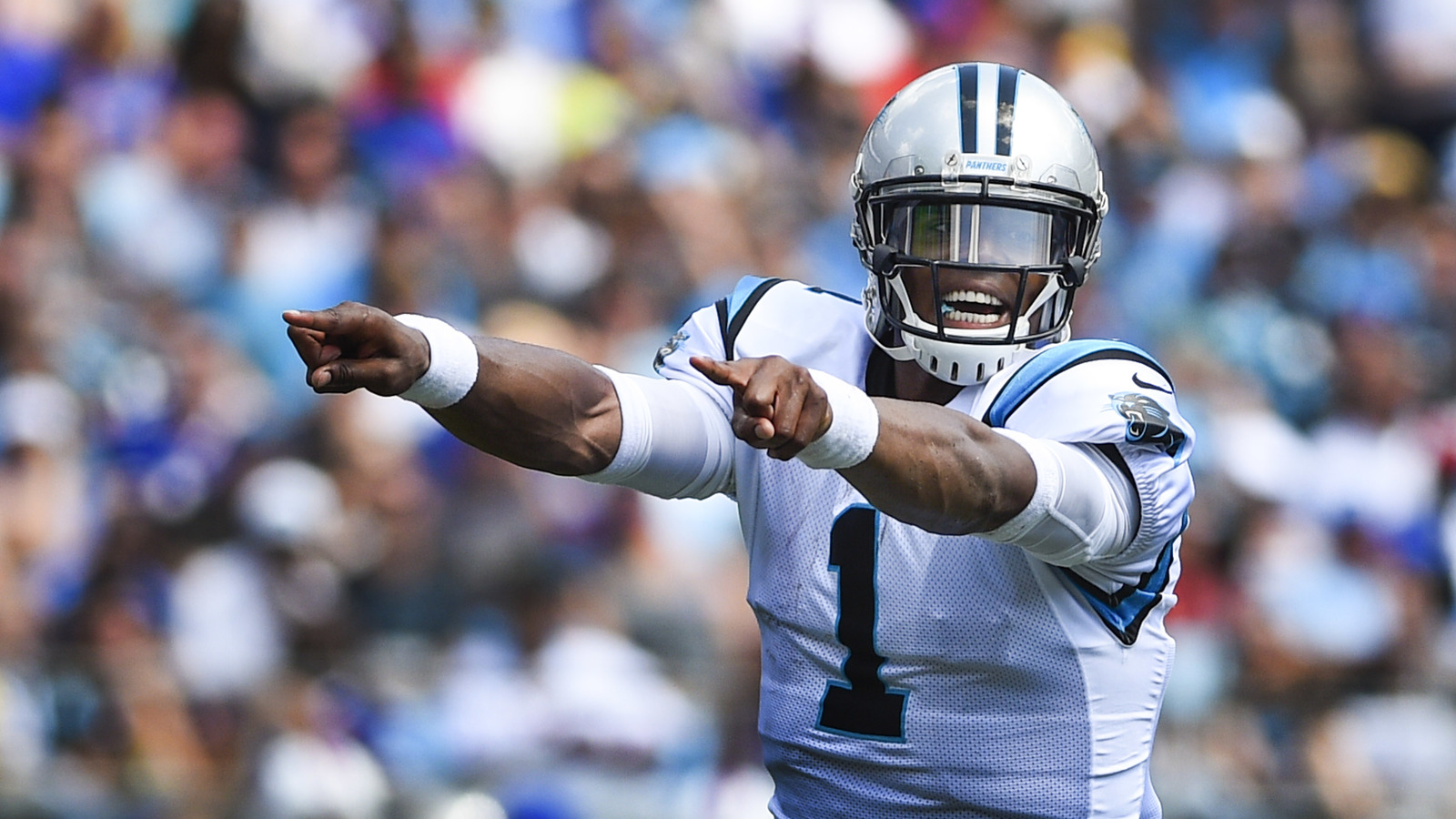 In the battle for the No. 2 receiver on the team, it is a mess. In fact, it is getting more convoluted. Getting reps with the first team are Brice Butler, Chad Williams, Christian Kirk, J.J. Nelson and now Greg Little. And based on the way they are getting reps, it is impossible to know who is in the lead.

Greg Olsen with his third touchdown in these red zone drills. Shaq didn’t get quite his head turned around.

Cam Newton with a back-foot throw to DJ Moore, who outruns Thomas Davis down the sideline.

Christian McCaffrey isn’t out here (illness per team) and P Michael Palardy said last week his wife was due to have a baby this week, so he’s obviously there supporting her.

Perhaps Newton was feeling extra motivated by former Carolina wide receiver Kelvin Benjamin’s comments over the weekend to the Athletic. Whatever it was, No. 1 was in a groove today, talking trash and slinging perfectly-placed touchdowns to rookie D.J. Moore and tight end Greg Olsen.

Newton threaded another needle to receiver Devin Funchess, but unfortunately he dropped the pass.

Nice sequence: Good catch by running back Cameron Artis-Payne from QB Taylor Heinicke to move the chains in the two-minute drill. Then Gaulden swat-punches out a would-be Jason Vander Laan catch. A long catch by Bug Howard, who manages to stay inbounds, on the next snap leads to Vander Laan winning the ball against Gaulden for the TD.

Wide receiver Jarius Wright had three nice catches on the same drive. He also caught a deep pass from Newton for a touchdown on a day when Wright and Olsen were Newton’s favorite targets. People should be pleasantly surprised by how quick and consistent Wright is.

Bears quarterback Mitch Trubisky made impressive throws down the field to tight ends Dion Sims and Trey Burton, but no player stood out more than defensive lineman Akiem Hicks.

Mitch Trubisky had his best practice of training camp. He hit throws all over the field. Downfield throws, short throws, throws to the sideline, throws over the middle. Simply put, Trubisky was on his game. It was a noticeable contrast to Saturday’s disjointed performance and many of the inconsistent performances we’ve seen from the second-year quarterback throughout camp.

In live-tackling drills against the second defense, Trubisky connected with tight end Trey Burton on a perfectly placed fade in the back, right corner of the end zone. The ball was away from safety Deiondre’ Hall where only Burton could catch it.

Later in that drill, on a fourth-and-goal, Trubisky progressed through his two front-side options and located wide open tight end Dion Sims in the back of the end zone for a touchdown. Great read and patience.

In one on one drills, Prince Amukamara ran stride-for-stride with Anthony Miller deep down the left sideline. But Trubisky dropped the ball in over Miller’s outside shoulder. It was a tiny window, and the 30-yard throw was exceptional.

Fans got a treat on the first play when the Cowboys ran a successful reverse to Tavon Austin, followed by a textbook Dak Prescott to Geoff Swaim touchdown pass on Jason Witten’s signature route.

When the 2s faced off the defense got confused leaving Blake Jarwin open for a long gain leading to a short Rod Smith touchdown.

We then saw Ezekiel Elliott run a sweep for 20-yards on a play where Connor Williams dominated Kony Ealy. Ealy’s poor camp continued, as he also lost in 1-on-1s.

The red zone session concluded when Cooper Rush tossed a perfectly placed touchdown pass to Lance Lenoir, who made a highlight reel catch.

When the second teams faced off Cooper Rush led a touchdown drive that finished with a brilliant catch by Tavon Austin.

There were several Rico Gathers sightings, including a touchdown grab during 7-on-7 drills. Still, his reps are mostly coming with the third team and he appears to be on the bottom of the tight end depth chart.

As noted up top, Lance Lenoir had a terrific touchdown catch and his strong training camp continues.

On one drive Saturday night, Brandon Zylstra made back-to-back outstanding catches. The former CFL’er has shown outstanding hands and an ability to win the ball when it comes his way. His play has made fight for a job on the receiving corps quite interesting as Stacy Coley and Tavarres King have both been dinged up and Kendall Wright hasn’t seen many first-team reps.

“When I said the young guys are making some plays, that’s exactly who I was talking about,” Stefon Diggs said. “As far as showing some consistency getting better, committed to learning new things and taking it each day by day. I like him.”

Laquon Treadwell is off to a promising start. Last year’s conversations surrounding Treadwell in camp were similar to this year, but instead of getting nicked up and missing some time, he has been a regular standout. On Friday Treadwell had the highlight of the day catching a deep pass from Cousins against Trae Waynes. We won’t know whether he’s going to take another step under new offensive coordinator John DeFilippo until the regular season, but if you are looking for positive signs out of the 2016 first-round pick, there are plenty so far.

“I’m really proud of that guy,” DeFilippo said. “He has worked his butt off to really improve. I think from what I’ve heard he has matured. You see a young man having some success and not letting that success go to his head. We are going to continually challenge him every single day to stay mentally focused. He can do that. There is no doubt in my mind he can do that. I’m really happy where he is right now. Obviously, you saw him make a bunch of plays yesterday in the red zone. With that body type, that is a unique guy. That is a big guy that can run fast so we need him to keep progressing.”

The New Orleans Saints released wide receiver Brandon Coleman with a failed physical designation on Sunday (Aug. 5), according to a league source.

Coleman had not participated in training camp while on the active/physically unable to perform list with an undisclosed injury.

Just when you think someone is starting to stand out in the running back battle, someone else makes a play. It’s still hard to create any separation at the position. Jonathan Williams, Terrence West and Boston Scott all had good carries during team drills. Scott might have had the best one when he took a pitch to the right side of the line and turned it up the field for a touchdown. Perhaps bonus points need to go to Scott for making plays in the receiving game.

It has taken longer than expected for running back Josh Adams to turn heads at Eagles’ training camp. A stress fracture in his foot that cost him the entire offseason of practices can be blamed for that.

Adams has been a full go in the last three practices and it he is already showing why so many were surprised he went undrafted. Standing 6-foot-3, Adams is tough to bring down and he speed is impressive considering how big he is.

Figuring out where Adams stands on the roster is not easy. On one hand he appears to be at the bottom of the depth chart right now with the preseason games around the corner. On the other, Adams is young and filled with potential. Keeping him on the roster this year to develop for the future makes sense considering the Eagles might be without both Jay Ajayi and Darren Sproles in 2019.

The Eagles will definitely be keeping Zach Ertz, Dallas Goedert and Richard Rodgers. All three will have a role on the offense and the Eagles will be using two tight-end sets a lot next season. Unlike last season, when the Eagles really only used Ertz in the passing game consistently, it wouldn't be surprising to see Goedert and Rodgers get in on the action as well, this season.

The fourth tight end the Eagles could keep is Joshua Perkins, who has had a stellar camp and is also a strong receiver. He is also a decent blocker and with NFL experience could be used as a blocker along the line right away. Perkins has caught seven of the eight passes thrown his way during training camp and has two touchdowns.

Keeping four tight ends and going light at receiver might make more sense for the Eagles than carrying six receivers.

Trent Taylor (back) received his first 1-on-1 reps of camp. He got open and made catches on all three of his routes. However, Reed did well to keep up with the shifty slot receiver on two of those reps.

Steven Dunbar made the play of the day with an impressive over-the-shoulder catch on a deep ball from Jimmy Garoppolo down the right sideline.

Joe Williams broke free for a big run. He took a handoff to the left, made one cut upfield and turned on the jets. Jerick McKinnon wiggled free for a nice gain on a screen pass to the right. Garoppolo completed passes for sizeable gains to Pierre Garçon, Goodwin and Kendrick Bourne.

Speaking of Bourne, the second-year receiver scored a 45-yard touchdown during a move-the-ball period to end practice. Garoppolo made an easy pitch-and-catch to the right, and Bourne did the rest of the work, turning upfield and taking off for the end zone.

Pierre Garcon was a frequent target Sunday and looks like the player who had 40 catches for 500 yards last season before missing half the season with a neck injury.

“I’m not worried too much about Pierre,” Shanahan said. “We know who Pierre is and we know what he brings to the table.”

Receiver Trent Taylor (back) is still being eased into action after starting camp on the PUP list. His two reps in one-on-one drills Sunday marked his first action with a defender in front of him since the regular-season finale against the Los Angeles Rams on Dec. 31.

WR Pierre Garcon had his best day of training camp. Beat cornerback Tyvis Powell, who started in place of the injured Richard Sherman, with a slant route for a 30-yard gain. Also beat starting cornerback Ahkello Witherspoon with a dig route for a 15-yard gain.

RB Joe Williams ran an inside zone run to the right, quickly spotted a cutback lane and sprinted 30 yards through the defense until a safety tagged him near the left sideline. Williams is a natural runner who has the best vision of the running backs on the 49ers. He should make the roster as the fourth running back.