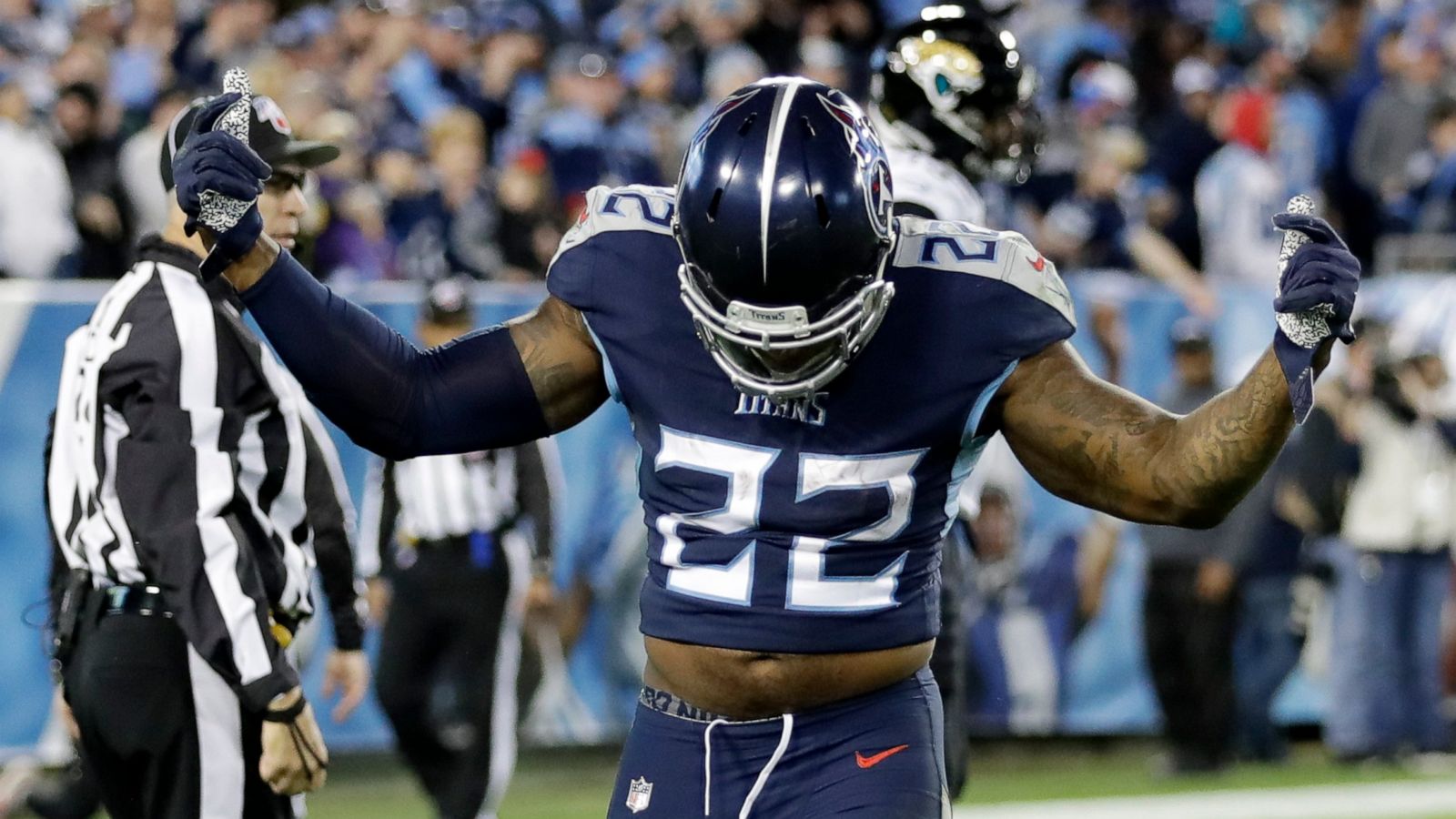 Week 1 is in the novels and we’re ready to move on to Week 2. Dan and I have collaborated on this article and we’re excited to give you our favorite DFS picks for this week. Let’s get right to it!

Murray has quite a nice rushing floor and upside at $2,200 cheaper than Lamar Jackson on DraftKings. Couple this with the pace the Cardinals play at and Murray makes for my favorite value-play for cash games in DFS this week.

Josh Allen seems to be in a smash-spot against the Dolphins after racking up some insane usage last week against the Jets. Allen threw for his first career 300-yard passing game on 46 attempts and added 14 carries for 57 yards and a touchdown on the ground. He’s in a great spot this week and his stacking options are clear-cut in John Brown/Stefon Diggs.

While I expect him to be fairly popular and game script may be of concern should Dallas get ahead big early, I love the matchup and split here for Dak, and really like stacking him with stud rookie Ceedee Lamb.

Ben looked healthy last week and now gets a home game against a Denver defense that recently lost both Von Miller and A.J. Bouye. Ben has a loaded receiver group with Juju, Diontae Johnson and James Washington. I especially love the Big Ben/Diontae Johnson stack in DFS tournaments this week.

Phil threw for 362 passing yards in his Colts debut and showed a promising rapport with Parris Cambell. Phil gets his first home game as a Colt against an extremely vulnerable Vikings secondary starting multiple rookie cornerbacks. Phil should thrive in this matchup and without Jack Doyle the targets may concentrate even more to Cambell and T.Y. Hilton.

Tannehill looks like a decent option under 6K and the Titans offense showed impressive pace last week against the Broncos. The Titans ran 78 plays and ran no-huddle on 28% of those plays - 3rd highest rate in the entire NFL. Tannehill and the Titans should get plenty of plays off against a bottom-tier Jaguars defense. 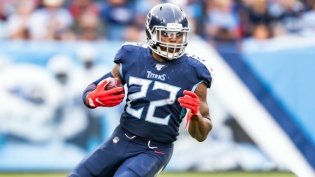 Henry looks like he’s in a really good spot as a home favorite against a weak Jacksonville defense. He got 34 touches in Week 1 against the Broncos and is poised to feast against the Jags. I give Henry an even bigger bump on half-point PPR sites like Yahoo and FanDuel.

Zeke went over 125 scrimmage yards and scored two touchdowns last week against the Rams. He played 95% of the 2-minute drill snaps and received every team carry inside the five yard line. Zeke is in a great spot as a home favorite against a susceptible Falcons run defense.

Rojo had 19 touches and 82 scrimmage yards last week and appears to have the lion’s share of the Buc’s running back touches for now. He’s cheap, will be somewhat low-owned, and gets a prime matchup against a Carolina defense that’s given up 30 rushing touchdowns in the past 17 games.

Ekeler had a career-high 19 carries last week but was surprisingly quiet in the receiving game, only catching one pass for three yards. The rushing attempts are promising and he’ll certainly be more involved in the passing game in the future. Ekeler will be the center-piece of this offense as the Chargers try to keep up with the Chiefs this week. 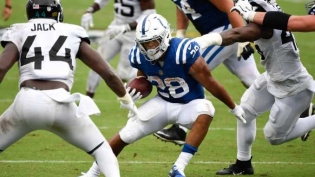 Marlon Mack tore his achilles tendon last week and JT will step in as the primary ball carrier for the Indy offense. He’s a prolific prospect running behind an elite offensive line as home favorites. Taylor will be extremely popular in DFS but he makes a lot of sense in this spot.

Robinson had 100% of Jacksonville’s running back carries in week 1, finishing with 16 carries for 62 yards and added 28 receiving yards on one catch. He looks like a good bet for 15+ touches and is a strong value at his price point.

Evans was never truly a part of the Week 1 game plan for the Buc’s due to him not practicing a single time in the previous two weeks. This week will be much different, as Evans practiced all week and Chris Godwin will be sitting out due to a concussion. Evans should be a big part of the Buc’s game plan as they look for their first win of the season.

Robinson is clearly Trubisky’s go-to target in this offense and may be force-fed some additional targets this week after word got out that he’s unhappy with his current contract situation in Chicago. The Giants have a beatable secondary and they don’t have the personnel to contain A-Rob for four quarters.

Amari is in a really good spot this week against a slow Atlanta secondary and in a home game with a high total. Cooper collected an impressive 14 targets last week and reminded us that he’s truly the number one receiving option on this team. This game has a high total and Cooper has a history of blowing up in home games just like this. 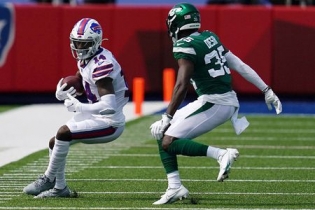 Diggs came out hot in his Bills debut with eight catches on nine targets for 86 yards. Josh Allen threw the ball a promising 46 times and quickly acclimated to his new wide receiver. The Dolphins have a respectable secondary but I expect the Bills offense to roll this week and Diggs will likely be a big part of it. I’m a big fan of Josh Allen/Stefon Diffs DFS stacks this week.

Johnson shook off a rough start last week and finished with a receiving touchdown and led the Steelers with a 32% target share. He consistently created separation and is in a great spot at home against a Denver secondary that just lost AJ Bouye. He’s cheap and offers great upside. Johnson is one of my favorite values on this slate.

Campbell looked explosive last week and showed an impressive rapport with Phil Rivers. He finished the game with six catches on nine targets for 71 yards. The Vikings secondary was exposed last week by the Packers and there’s a good chance that Campbell and TY Hilton continue that trend and torch Minnesota this weekend. Campbell is one of my favorite cheap receivers on the entire slate.

Henry was a big part of the Chargers offense last week and finished with five catches on eight targets for 73 yards. Tyrod showed trust in Henry and the Chargers will likely be throwing quite a bit to try to keep pace with the Chiefs' offense. Henry makes a lot of sense in this spot and the game environment is excellent.

Hurst had a quiet Week 1 for the Falcons and finished with three catches on five targets for 38 yards. The Falcons will likely be in catch-up mode in the second half and Hurst will have a good chance to improve upon last week’s production. The Cowboys just lost starting middle linebacker Leighton Vander Esch as well, bumping up Hurst’s prospects just a bit.

Jonnu turned seven targets into 37 receiving yards and a touchdown against the Broncos last week. He’s carved out a consistent role in this offense and he may get an uptick in targets with AJ Brown out this weekend with a bone bruise. Smith offers run after the catch upside and has a very reasonable price tag. 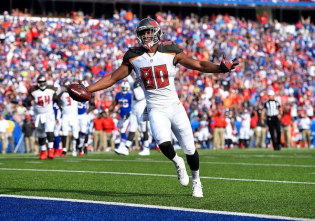 O.J. Howard scored a touchdown in Week 1 and may have an increased role against the Panthers with Chris Godwin out. (Photo credit: AP Photo / Rich Barnes)

This is more of a gut-call play but I’m expecting a solid week from Howard. He turned six targets into four catches, 37 yards and a score last week. Chris Godwin is out with a concussion and Rob Gronkowski looked like he was in clay-mation. Howard has a chance to be the number two receiving option for Tom Brady this week.

Herndon is second on the team in targets through the first week and the Jets will be without Leveon Bell and Jamison Crowder this week. The matchup isn’t the greatest against the 9ers but Herndon looks like a candidate for 7+ targets this week. He should produce enough with his targets to pay off his price-tag.

Best of luck this weekend everybody!