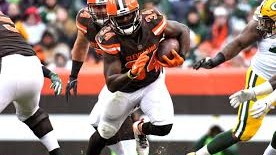 The rush of free agency and the draft are now over, and it is time to look at how the dust has settled and what rosters look like after so much movement. Every year there is such turnover in the NFL that it is sometimes hard to keep track of it all. Fear not, let us do the work and let you know who ended up where and what you can expect from them. With so many players to talk about, let's break it down division by division and let's start with the AFC East.

Isaiah Crowell, RB, New York Jets. I don’t know what to think of Crowell this season. I don’t expect the Jets to be a very good team, and I don’t expect them to be a very good offense. With Bilal Powell also in the mix, the Jets have to running backs who have talent, but have also battled inconsistency. He will lose most of his value as a pass catcher, because that is Powell’s strength. The Jets offensive line isn’t as good as Cleveland’s was. All of that being said, as of now I see Crowell as being a high end RB3.

Frank Gore, RB, Miami Dolphins. Gore has continued to stay on the fantasy map in Indianapolis recently, but I don’t see that being the case anymore with his move to Miami. The Dolphins have young budding stud Kenyan Drake as their starter, and I can’t see them yielding significant carries to a 35 year old guy past his prime. I think this is more of a move for Gore who played his college ball in Miami and looks to finish his pro career there as well. I can’t see him topping 500 yards or three touchdowns. What? I don't have Brady throwing me the ball anymore? Tanne-who? Fire my agent!

Danny Amendola, WR, Miami Dolphins. I don’t see this one working out well for Amendola’s fantasy value. First, he does get hurt a decent amount. Second, players are always a lot better for the Patriots than they are for anyone else. Third, I don’t know that you can trust that Ryan Tannehill is going to be a overly productive fantasy quarterback. And lastly, the Dolphins are going to run more than pass and they have several receivers that are better than Amendola. His value in New England has been in PPR leagues, and in Miami (barring injuries) if he catches 50 passes I will be surprised.

Terrelle Pryor, WR, New York Jets. Maybe no one needs another change of scenery more than Pryor. After a breakout season for the Browns, Pryor dropped a hot dump in the bed in Washington. I like to believe that Pryor is going to be better than he was last season, but I can’t see him being as good as he was for the Browns. However, the Jets receiving corps is in flux. Robby Anderson is sure to face league discipline from offseason arrests and Quincy Enunwa is coming off a serious neck injury. IF Pryor comes into the season as one of the Jets top two receivers there is a chance that he could be fantasy relevant.

Cordarrelle Patterson, WR, New England Patriots. Patterson is sure to take over the kick return duties for the Patriots, but we all know there are almost no players who are fantasy relevant just on that skill. Patterson got a little bit of a break with Brandin Cooks traded out of town, but there are a lot of receivers on the roster. Keep an eye on him as a late round sleeper with  chance to be an explosive player.

A.J. McCarron, QB, Buffalo Bills. Long a backup to Andy Dalton, McCarron finally looks to get his shot to be a starting NFL quarterback after signing in Buffalo. However, the Bills also drafted Josh Allen, so McCarron better play well early, and consistently. It is hard to say what to expect from McCarron, who has barely played in the NFL despite being drafted in 2014. He has a solid enough arm, but the Bills offense revolves around the run and they don’t have good receivers. Even if McCarron keeps the starting job for a while I don’t see him being overly fantasy relevant. Rawls is gonna need to stay healthy, and for a few injuries to happen to have any chance at fantasy relevance in 2018

Thomas Rawls, RB, New York Jets. Rawls is a big, bruising back, although coming with these big bruising hits comes with a lot of injuries. Rawls has had trouble staying on the field the past two years, and now likely isn’t a lock to make the Jets roster. This backfield has many mouths to feed, and if he is on the team, the only real hope he has is to get goal line work and vulture touchdowns.

Jordan Matthews, WR, New England Patriots. A former second round pick of the Eagles, Matthews stock has fallen each of the past two seasons. He gets a much better offense in New England instead of Buffalo (DUH!), but he also goes to a much more crowded receiving corps. Matthews first job is going to be to stay healthy, then to try to get a rapport with Tom Brady and move up the depth chart. Yeah, it is possible but unlikely that Matthews will be a good fantasy player this year.

Chris Ivory, RB, Buffalo Bills. After a couple fairly decent seasons for the Jets, Ivory never really got his feet under him in Jacksonville. He goes to the Bills, who are a very run heavy offense. Obviously he isn’t going to threaten for the starting job over LeSean McCoy, but Ivory can carve out a role where he sees five to seven carries a game and maybe vulture a few touchdowns. He only carries any fantasy value in deeper leagues.

Teddy Bridgewater, QB, New York Jets. I know everyone wants Bridgewater to return from his horrific injury and be a solid NFL quarterback, but I don’t think it will be this year and I don’t think it will be with the Jets. I expect Josh McCown to be the starter in September, and with drafting Sam Darnold third overall, that leaves Bridgewater the odd man out. His hope can be to get off to a good start in the preseason and find a new home via trade.