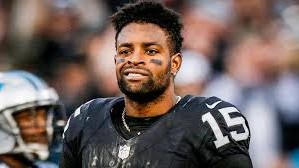 Generally not the hotbed for free agent movement, the AFC North saw a lot of new faces coming into 2018. The Browns made wholesale changes, the Ravens revamped their entire receiving corps, although the Steelers and Bengals basically stayed put. Can the Browns win more than zero games this year? Can anyone challenge the Steelers? Let's take a look at the new faces that came into the division via free agency or trades this offseason.

Michael Crabtree, WR, Baltimore Ravens. Crabtree will be 31 years old in September, but he will be given the opportunity to be the number one receiver in Baltimore. What is that worth? It is hard to say. The Ravens are a run first offense, and their quarterback is average at best. Flacco will have his best receiver in quite a while with Crabtree, and hopefully they will get on the same page together. I see Crabtree as a very good WR3 coming into the year.

Carlos Hyde, RB, Cleveland Browns. The idea of Carlos Hyde has always seemed to be better than the actual production of Carlos Hyde. Sure, he didn’t come from a great team in San Francisco, but he has never had a 1,000 yard season. He’s never had more than eight touchdowns. He goes to Cleveland who is an up and coming offense, but they also just drafted Nick Chubb at the top of the second round. And they still have Duke Johnson who has value and takes all of the pass catching out of the backfield. Hyde has a chance to be a very low end RB2 or best served as an RB3. Landry took the payday, and hopes to reverse the fortunes of the lowly Browns and stay a PPR machine for fantasy football

Jarvis Landry, WR, Cleveland Browns. Landry had over 110 catches in two of the last three seasons, but that was in Miami. He now goes to this new offense in Cleveland, which has the makings of being solid, but there’s a lot of new moving parts. Landry is a reception whore, and is one of the best possession receivers in the league. Whether it be Tyrod Taylor or Baker Mayfield, I can still see Landry catching 90 passes for over 1,000 yards, but six touchdowns or less.

Willie Snead, WR, Baltimore Ravens. The third part of the revamped Ravens receivers, Snead could be the most difficult to predict. A big part of the Saints passing game in ’15 and ’16, Snead lost part of last season to suspension, some to injury, and then the rest to sucking. He only caught eight passes last season. Could he be the high volume reception guy on Baltimore? Yes its possible, although again the Ravens aren’t the highest powered offense in the league, so to believe that all of these guys will hold fantasy relevance is unlikely. Right now Snead is at least worth a consideration late in PPR leagues.

Tyrod Taylor, QB, Cleveland Browns. Well, we all know that this one will be short lived now that the Browns have taken Baker Mayfield number one overall in the draft. Taylor is an interesting case. He has great skills with his legs, but also so good quarterbacking skills. However, he had little chance for success in offensively challenged Buffalo. He is now in Cleveland who has a solid offensive line, a decent running game, and some playmakers at wide receiver. However, even if he performs well I still think he can’t hold on to the job past Halloween with Mayfield waiting in the wings.

John Brown, WR, Baltimore Ravens. Brown is only 28 years old, but his career has spiraled out of control the past two seasons. He’s had a hard time staying on the field, and the receiver situation in Arizona went from good to bad very quickly. The Ravens receivers look like the best that they have in years, which isn’t a great thing for their collective fantasy value when Flacco has only one 4,000 yard season in his career. I don’t see Brown as someone you look to draft in August.

Jeff Janis, WR, Cleveland Browns. Janis is a big, tall receiver who was lost in the shuffle in a crowded Green Bay receiving corps. He has never had more than 11 catches in a season, however, and he has three or four receivers ahead of him in Cleveland. I would say that you would need two injuries to Cleveland receivers before you would even think about picking up Janis, and that is if the offense is working up to its potential.