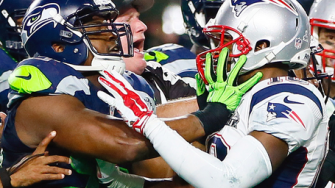 NFL training camp is now underway!!! Some of us have been waiting patiently for football season to begin and now that teams have practices underway, we can start getting our football fix. Training camp may not be the most exciting thing in the world to watch, but it can definitely offer us some things to look for, particularly when starting positions may be up in the air.

That's why I'm here. I want to give you some things that you can keep an eye on, so you know who to draft and who not to draft in your fantasy league this season. For the purpose of this article, I am going to focus on running back battles. For fantasy purposes, it may not matter much who wins the number two or three wide receiver job for a particular team, so I'm going to pass on that.

There are a few quarterback battles, but since the likes of Tom Savage/Deshaun Watson, Trevor Siemian/Paxton Lynch or Mike Glennon/Mitchell Trubisky likely aren't going to be fantasy juggernauts, I'm going to pass on those as well. Let's go where the real meat and potatoes lie...at the running back position!

With Devontae Booker sidelined this preseason with a fractured wrist, it should be a two horse race for running back duties in Denver. Both CJ Anderson (torn meniscus) and Jamaal Charles (ACL) are coming off major injuries, so it's unlikely that Denver will employ a "bellcow" approach, but rather I see them employing a running back by committee attack. With Charles having ACL injuries to both knees, I can see more of 65%/35% split in carries in favor of Anderson. I can also see Anderson getting the nod in goal line situations, but with Charles' proficiency in the pass game, I think 35-40 catches is realistic and that gives him a slight bump in PPR leagues. It will be important to see if these guys look 100%, and if one of them doesn't look quite at full health this preseason, be ready to pounce on the other one.

To start with, James White and to a lesser extent, Dion Lewis, should handle third down/passing situation for the Patriots, so in my opinion Mike Gillislee vs Rex Burkhead is a competition for early down duties. I know what you're saying...the New England running back situation is a fantasy nightmare with Bill Belichick and should be avoided at all costs. However, LeGarrette Blount had 299 rushing attempts last season, and maybe there is room for another high-volume back in New England this season. With Blount now in Philly, the Pats brought in both Mike Gillislee and Rex Burkhead this season to handle the Blount role. Who will get it? My guess is Gillislee as he has been very effective at gaining yards after contact and breaking off the big play. He was second in the league in yards after contact per attempt last season and also gained 40% of his rushing yards on rushes that went for greater than 15 yards (per Pro Football Focus). He is the better runner than Burkhead in my opinion and I will monitoring New England closely this summer to see if my assumption holds up.

I'm going to get this out of the way first. Jeremy Hill is not that good. In 223 rushing attempts in 2015, Hill averaged 3.6 yards per carry. In 2016, he averaged 3.8 yards per carry on 222 rushing attempts. That's sucky. However, Hill did score 20 rushing touchdowns the last two years, so I'm not ready to say that he won't see any goal line work. Mixon on the other hand, is very talented and could potentially be an everydown back. This season however, I think the rookie, Mixon will see a majority of early down work, Gio Bernard should see some passing work and if Hill gets short yardage duties, this could severely limit Mixon's value. I've done several mock drafts with experts from around the industry, and some of those experts that I respect very much have him as high as RB13 on their board. That's a little high for me, but definitely watch Cincinnati this summer to see how this situation plays out.

This is the hardest backfield situation for me to predict. Incumbent, Spencer Ware has performed admirably the past two seasons, but that didn't prevent the Chiefs from drafting Kareem Hunt in the third round of this years' NFL draft. Hunt was second in the FBS in forcing missed tackles and can be a threat the Chiefs backfield needs with Jamaal Charles now in Denver. Beat writers are predicting Hunt has every opportunity to steal the role, but I don't think that Ware is going to give it up easily. Watch this battle closely this preseason.

If rookie Dalvin Cook has his way, he's going to fly away with the job.

With Latavius Murray recovering from ankle surgery, rookie Dalvin Cook will have every opportunity to steal the gig in Minnesota. However, there are still a few things to monitor which could effect where he should be drafted this year in fantasy drafts. First, Cook suffered from fumbling issues in college, and if he shows at training camp or in preseason games that his hands were soaked in bacon grease, that could limit his volume during the regular season. Coaches don't seem to like it when players put the ball on the ground. Secondly, there is a very good chance Latavius could handle goal line work, so once healthy, keep an eye on who is getting the work at the goal line. Both of those things are important to gauge what Dalvin Cook's value will be come draft day.

I'm not quite sure this is a "competition" per se, but I think it's worth keeping track of what Thomas Rawls and CJ Prosise's roles will be. Eddie Lacy is capable of handling all three downs, but in an effort to maximize his talents, I can see Rawls spelling Lacy to keep him fresh and Prosise handling third down/passing situations. If it looks like Pete Carroll is going to give Lacy some passing responsibilities, make sure to adjust his ADP accordingly.

Undrafted free agent running back, "Fat" Rob Kelley came into Washington last season and defied the odds as he snagged lead back duties away from Matt Jones, mid-season. Jones is now out of the picture, but Washington drafted rookie, Samaje Perine in the fourth round, and ironically, Perine is heavier than "Fat" Rob. Perine has good, not great, speed and prefers to run over defenders instead of around them. If I had to predict, I think Kelley will still take the lead on early downs, with Perine getting mixed in, as well as handling some goal line work. Chris Thompson should still handle third down situations and that limits all of their fantasy value. Keep an eye on this situation in August however, and see if anyone seems to be seperating themself from the pack.

If you think Carlos Hyde is just going to concede his job to a rookie, think again.

It seems like there is a big contingency among football people that feel Carlos Hyde doesn't fit Kyle Shanahan's system. I get that. A lot of those same people feel that since Kyle Shanahan fought to draft rookie Joe Williams in this years NFL draft, that the fourth round back would be the guy to lead the Niners in rushing attempts this year. I can see that as well. However, it's rare that you see a team hand over the reigns right away to a rookie, especially if that rookie has had issues with fumbling (7) in college. Hyde has come into camp in great shape and I can see this being a time share situation, with Hyde getting the edge in carries. This is a true toss up situation though, so it's definitely one to monitor closely this preseason and see if the coaching staff is favoring one over the other.

I want to begin by saying that if you think Matt Forte will be cut by the Jets, you're wrong. He's guaranteed $4 million regardless of whether he's on the roster or not, so the Jets have no incentive to let the 30 year old running back walk. With that being said, the Jets are in full "rebuild" mode, and should lean heavily on Bilal Powell this season, rather than put more mileage on the veteran. I can see Powell getting 70% or more of the carries this year, as well as being very active in the passing game, while Forte should serve as the complimentary piece for the first time in his career. Powell is currently being drafted in roughly the sixth round as a high end RB3. I love that value and think he has the opportunity to greatly outperform that ADP.