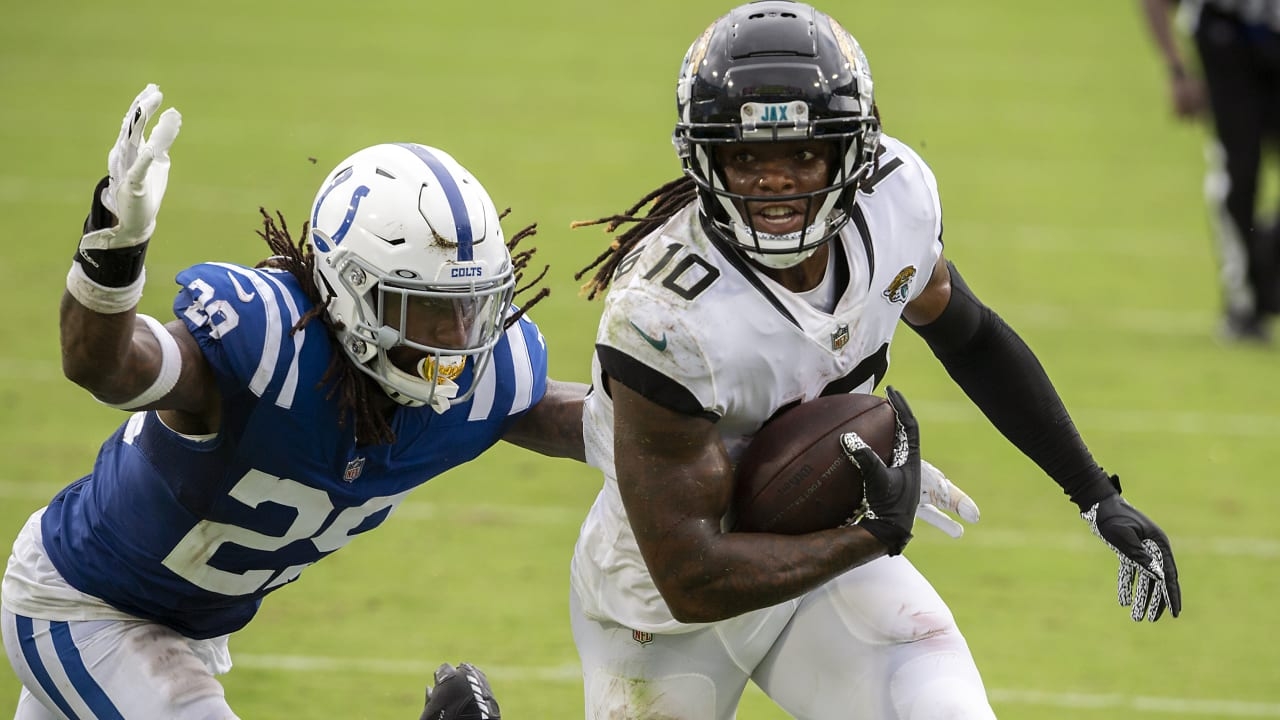 As we turn the page to Week 2, the NFL never seems to stops developing opportunities for the next man up. As we all know this past offseason was not the norm. There were no pre-season games and offseason training activities were done through video meetings rather than in person on the practice field. These first few weeks might be very turbulent for your fantasy rosters. As fantasy managers try to adapt to the ever-changing NFL, this weekly series will keep you ahead of your league-mates.

Ryan Tannehill, Titans 45% Owned -  Ryan Tannehill continued where he left off from last season, with a nice showing on the road at Denver for Week 1. Tannehill got all his weapons involved in the offense targeting four pass catchers with at least four targets. This week he faces a Jaguars defense that just allowed Phillip Rivers to throw for 373 yards and a touchdown. Tannehill should be owned in all formats and if you're living that quarterback streaming life he is a good option this week.

Gardner Minshew, Jaguars 31% Owned - Gardner Minshew's ownership increased by nine percent over the past week, so fantasy managers are starting to believe in the Minshew. After posting 173 yards and three touchdowns in Week 1, the quarterback's ownership is sure to continue to be on the rise. With the Jaguars sure to fall behind once again to the Titans, it should initiate Minshew time. He is a definite must-own in two-quarterback leagues and stream worthy.

Mitchell Trubisky, Bears 7% Owned - With the Bears set to face off against the Giants this week, Mitchell Trubisky is primed to have another solid outing in Week 2. The quarterback lit up Lions' defense for 243 yards and three touchdowns and the Giants secondary just got torched on Monday night by Big Ben and the Steelers. if you need a streamer this week or want to add depth in deeper leagues for owners not happy with their starter like Carson Wentz owners, Trubisky is your man.

Chase Edmonds, Cardinals 42% Owned - I'm going to keep pounding on that Chase Edmonds drum until his ownership is over 50 percent. Coach Kliff Kingsbury has the offense like a Ferrari blazing down the highway with this uptempo offense. Even though Kenyan Drake gets the majority of the workload, some offensive sets had both Drake and Edmonds out on the field at the same time. Edmonds touchdown reception last week was on one of these occasions. If Drake should go down Edmonds will flirt with RB1 numbers and is a must-own in all leagues.

Alexander Mattison, Vikings 45% Owned - Alexander Mattison is another lottery ticket that does have a little stand-alone value even with Dalvin Cook running wild. Mattison was used in both facets of the game, rushing and receiving his way to a total of 90 combined yards. Mattison should be owned in all leagues.

Joshua Kelley, Chargers 37% Owned - Great to see the Joshua Kelley ownership level skyrocketing up. Last week Mr. Kelley was owned in 11% of leagues and now it's up to 37% in Yahoo leagues. I guess that's what happens when a rookie running back leapfrogs Justin Jackson for early-down work and produced 12 rushes for 60 yards and a touchdown. The rookie is already splitting RedZone touches with Austin Ekeler. Kelley's usage should continue to rise as the season progresses. Kelley should be owned in all leagues.

Jerrick McKinnon, 49ers 19% Owned - It was great to see Jerrick McKinnon play his first NFL regular-season game in two years. After consecutive season-ending knee injuries, McKinnon showed why Coach Shannahan signed him last offseason. He had three receptions on five targets for 20 yards and a touchdown and rushed three times for 24 yards. With George Kittle out this week look McKinnon to line-up outside to help the depleted receiving core. Try to add him to your fantasy roster's if you have space before the Jets game because he will be a hot commodity come waiver day.

Myles Gaskins, Dolphins 12% Owned - Who led the Dolphins in touches last week, Jordan Howard or Matt Brieda? The answer shockingly is neither. Myles Gaskins did and that's not a typo as Gaskins had nine carries for 40 yards and caught all four of his targets 26 yards. It will be tough for the Dolphins to get the running game going against the Bills this week, so if Gaskins is the main receiving option out of the backfield he should be used to counter the Bills run defense. Add Gaskin because until proven otherwise he may be the running back to own in this offense. He was the first running back drafted from this regime in the 2019 NFL draft so there may be more than meets the eye here.

Allen Lazard and Marquez Valdes-Scantling (MVS), Green Packers 48%, and 45% Owned - Aaron Rodgers's second and third receiving options might be the keys to Rodgers' fantasy resurgence this year. Lazard and MVS both produced over 16 PPR fantasy points last week. Both players can be added to 12-team leagues as they both should continue producing for the Packers' contest with Detroit's injury-plagued secondary this week.

Corey Davis, Titans 35% Owned - Could this be the year that Corey Davis finally puts it all together for a full season? Davis has shown glimpses in the past of why the Titans selected him sixth overall in the 2017 NFL Draft. In Week 1 he went off for seven receptions for 101 yards. Now the question is can he produce like that on a consistent basis? Now that A.J. Brown is listed as out for Week 2, Davis will have his opportunity to prove it. I can't stop thinking of Admiral Akbar in the back of mind saying " It's a Trap" but I'm willing to take that chance and so should you. Davis should be added in the 12-team format

Laviska Shenault, Jaguars 16% Owned - The rookie wideout from the University of Colorado has the NFL buzzing after Week 1. Laviska Shenault is one of the most electrifying players in the NFL. The Jaguars are going to line him up all over the offense to create a mismatch on opposing defenders. Shenault should be added in 12-team leagues.

Chris Herndon, Jets 46% Owned - Chris Herndon could not get much going against the Bills in Week 1 due to their stifling defense but nonetheless was targeted seven times. This week they play another tough defense against the 49ers but Jamison Crowder is out this week due to a hamstring injury. Crowder was targeted 13 times in Week 1 and Herndon is sure to be targeted early and often and should see around ten targets. He's a good add this week for fantasy managers that have their starting tight ends out this week.

O.J. Howard, Buccaneers 29% Owned - During draft season everyone was drafting Rob Gronkowski and O.J.Howard was left undrafted in most leagues. After Week 1 that tune has changed as Tom Brady targeted Howard four times to Gronkowski two. Howard is the more athletic of the two tight ends and should continue to be involved in the offense this week with Chris Godwin out due to concussion protocol. Howard is a great replacement for Blake Jarwin owners.

Jordan Reed, 49ers 3% Owned - Oh yeah the resurrection of one the great ones is here. Jordan Reed when healthy is a proven difference-maker at tight end. He signed with the 49ers this offseason and has been steadily been proving that he is healthy. Now, this week Reed finds himself starting for the injured George Kittle in a juicy match-up against the Jets. For those fantasy managers that are in a bind in deeper leagues due to having Kittle or another starter injured out this week, add Reed to fulfill that short term need.

Preston Williams, Dolphins 35% Owned - Was targeted seven times in his first game back from ACL injury and should again be heavily targeted whether DeVante Parker plays or not.

Scotty Miller, Buccaneers 33% Owned - Definite add if available with Godwin out this week.

Brandon Aiyuk, 49ers 32% Owned - Set to make his debut for the depleted 49ers receiving core against the woeful Jets.

Darrel Williams, Chiefs 19% Owned - A CEH injury away from becoming a possible RB2.

Frank Gore, Jets 13% Owned - Jets starter with Le'Veon Bell out for a minimum of three weeks.

Tre'Quan Smith, Saints 9% Owned - In line for major usage with Michael Thomas out.

Tua Tagovailoa, Dolphins 8% Owned - If bad Ryan Fitzpatrick continues to make appearances, it will be Tua Time sooner rather than later.

La'Mical Perrine, Jets 3% Owned - Rookie stash for deeper leagues with only an injured Bell and a forever young Gore standing in his way for big-time touches.

Darrynton Evans, Titans 3% Owned - Derrick Henry's back-up that might get some PPR run.