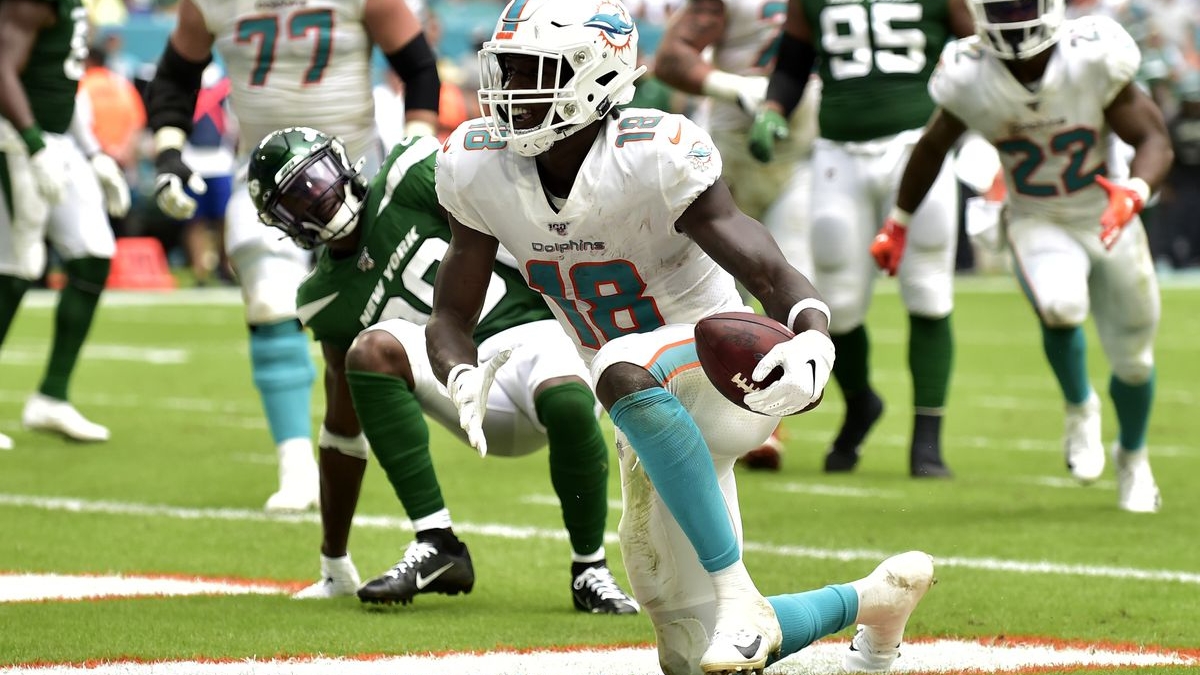 It seems as the weeks pass by we continue to lose cornerstone pieces of our fantasy teams. In Week 5 we lost Dak Prescott for the season with a broken ankle. He was having an amazing season and it is a real shame to see him get injured like that. Another stud that got injured but not as serious was Dalvin Cook, who injured his groin and will be out this week. I hope you listened and had added Alexander Mattison prior to this week's waiver wire frenzy for him. Let's see what players may be available in your leagues to add before your league mates do in this week's preemptive strike.

Teddy Bridgewater, Panthers 48% Owned - Mr. Bridgewater has been en Fuego lately by averaging 295 yards and two touchdowns over the last couple of weeks. Teddy B has a tough match-up this week versus the Bears but following this week he has a couple of great opportunities to have big games against the porous Falcons and Saints secondary. Bridgewater is a great addition to be ready for the bye gauntlet ahead.

Ryan Fitzpatrick, Dolphins 43 % Owned - The way that Fitzpatrick is playing this year he's illustrating that he DGAF when Tua Time is going to begin. The team loves playing for him and if he keeps playing like he's been and the Dolphins continue to win it will be tough for them to switch to Tua Tagovailoa anytime soon. Fitzmagic should have another excellent outing this week at home versus the lowly Jets. Great streamer this week.

Andy Dalton, Cowboys 26% Owned - With Prescott out for the year, Dalton is in store for a golden opportunity to have a monster second half of the season. Now if he can only play like he did when he was the Red Rifle in Cincinnati and not be turnover prone Dalton. The weapons are there for him to succeed. It will be interesting to see how Coach Mike McCarthy runs the offense moving forward, but I don't think the offense will be as fast-paced as it's been so far this season. But he is a must-add if you are in need of a QB.

Zack Moss, Bills 55% Owned - If Moss was dropped by a nervous fantasy manager that had to drop him for any circumstances, snatch him up quickly as he is set to return this week to the Bills backfield. Prior to his injury setback, Moss was on his way to getting a split of the running back touches with Devin Singletary prior to his injury.

Justin Jackson, Chargers 46% Owned - Since Jackson is on a bye this week it gives fantasy managers a chance to add him to your rosters now before the waiver wire rush next week. Jackson out-touched rookie Joshua Kelley 20 to 12 in their first game without the Austin Ekeler who is on IR for several weeks. He was also targeted six times in the passing game making him the running back to own in PPR leagues.

Matt Breida, Dolphins 24% Owned - Yea I know Myles Gaskins has been the bell cow for the Dolphins so far by quietly last week Brieda has moved up to number two on the depth chart making Jordan Howard a healthy scratch last week. I'm not sure if Gaskins can continue the heavy usage going forward but it is definitely interesting to see Brieda's touches increase as the seasons progresses. If you have the extra roster space Brieda may be a nice stash for later on in the season.

Mike Boone, Vikings 1% Owned - For deep leaguers Boone is a must-add for this week. With Dalvin Cook out this week with a groin injury, it was Alexander Mattison that garnered everyone's attention on the waiver wire this week, and rightfully so. But I'm not sure if Mattison will be carrying the entire load by himself this week for the Vikings versus the Falcons. After Cook exited last week's contest Boone had a couple of carries for 19 yards, his first touches of the season. Even though Cook is expected back after next week's bye, Boone may get fantasy managers the points they need in deeper leagues this week.

Henry Ruggs, Raiders 47% Owned - Ruggs was heavily drafted before the season began, but some early season injuries have caused his ownership to dip under 50% for the season. Last week illustrated what Ruggs can do when he is healthy, be a game-breaker for your fantasy squads. He was targeted three times and brought in two receptions for 118 yards and a touchdown. As soon as your done reading this check your waiver wire to make sure he's not floating around in there and add him up with the quickness.

Chase Claypool, Steelers 48% Owned - First there was Deadpool and now we have Claypool. What these two have in common is that they are both badasses. But Claypool demonstrated what he can do when given the opportunity to shine in the Steelers offense. When Diontae Johnson went down with a back injury it opened up the door for Claypool to come crashing in and boy did he. He was targeted 11 times and produced seven receptions for 110 yards and three touchdowns. More than likely Claypool has already been added in your league over the last few days but if he still there snatch him up.

Laviska Shenault, Jaguars 42% Owned - D.J. Chark left last week's game early with an ankle injury and has been very limited this week in practice making him a game-time decision this week. Whether Chark plays or not, look for Shenault to be heavily involved in the Jaguars offense this week against the Lions who are giving up the tenth-most fantasy points to wide receivers this season. His usage was already rising in the offense so add him now before it is too late.

Preston Williams, Dolphins 24% Owned - Shockingly Williams's breakout performance last week did not cause his ownership to skyrocket this week as Claypool's did, therefore leaving an opportunity to grab him now. Against the 49ers last week Williams was targeted five times for four receptions for 106 yards and a touchdown. This week he has a favorable home match-up with the Jets that will surely lead to another good outing making him a possible hot add next week. Beat the herd and add him now while you still can for free.

Jimmy Graham, Bears 51% Owned - I believe Graham has already sent Coach Matt Nagy a Christmas gift as a thank you gift for naming Nick Foles the starter for the Bears. Ever since Foles took over the starting gig he has brought life not only to this offense but especially Graham's game. Graham will probably never reach the status of his Saints heyday when he was playing alongside Drew Brees in New Orleans but he is a starting option for your fantasy teams nonetheless this year as he will continue to be involved in the offense especially in the Red Zone.

Irv Smith Jr., Vikings 8% Owned - Smith finally showed some glimpses of life last week as he had four receptions for 64 yards against the Seahawks. Now they have the generous Falcons defense coming to town who are allowing the second-most fantasy points to tight ends this season making him a great addition for deeper leagues and perfect bye week fill-in or streamer this week.

Trey Burton, Colts 11% Owned - In deeper leagues Burton has shown that maybe he can be an option for you, especially for tight end premium deep leagues. Burton was targeted six times last week and caught five receptions for 33 yards. With Mo Alie-Cox already ruled out with a knee injury for this week, look for Burton to be once again be targeted this week against the Bengals. He is an excellent addition for fantasy managers in a bind at the tight end position this week.

Eric Ebron, Steelers 49% Owned - Has a juicy opportunity this week against the Browns who are giving up the sixth-most points to tight ends this year.

Mike Williams, Chargers 45% Owned - Blew up last week after missing the previous game with an injury and is on bye so could be a sneaky add if he is still available in your league.

Dallas Goedert, Eagles 42% Owned - Add him now and hide him in your IR spot as there are rumors circling around that Zach Ertz may be traded. Hmmm, would be a TE1 if that happens once he returns.

Kirk Cousins, Vikings 38% Owned - Has a great chance for a huge game against the most generous fantasy points giving team to quarterbacks this year.

Christian Kirk, Cardinals 38% Owned - Has steadily increase his targets over the last two games and faces the Cowboys who are giving up the third-most fantasy points to wide receivers this season.

D'Ernest Johnson 28% Owned - A Kareem Hunt injury away from being an RB2.

Brian Hill, Falcons 18% Owned - Todd Gurley's insurance, plus he has been seeing some touches already.

La'Mical Perine, 16% Owned - With Lev Bell gone and only Frank Gore in his way, he should be more involved going forward.

Jalen Reagor, Eagles 15% Owned - Great IR stash with the second half of the season in mind.

Tua Tagovailoa, Dolphins 6% Owned - A must own in two-quarterback/super-flex leagues with the second half of season in mind.

If you would like to further discuss this or have any fantasy questions you can find me on Twitter at @smooth1074.