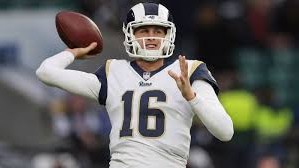 My father always used to say, “I’ve been to three county fairs and a circus, there’s nothing you can tell me that’s gonna surprise me.”

When I got older, I realized he hadn’t coined the phrase. Slim Pickens playing Major King Kong says a version of the same thing in Dr. Strangelove. Either way, my dad was right. The old man was never surprised.

But I guarantee he’d be shaking his head in disbelief at the start for the Tampa Bay Buccaneers. Ryan Fitzpatrick slinging the ball around like Brett Favre on codeine. Cooler than the other side of Steve McQueen’s pillow. Rocking up to a press conference with his Falstaff-bandolz and chains and chest hair meshing together. Feeding the soap opera and nonsense back to very writers wishing to create the characters.

It’s truly depraved and I’m lapping it up like a dog returning to its vomit.* Nothing screams insanity like watching grown men in gladiator pajamas try to kill each other for 60 minutes every Sunday. But Fitzpatrick’s antics and Antonio Brown trolling fans and Le’Veon** make it all worth tuning in. If you look away, you’ll miss an episode. And, let’s face it, you crave the distraction. You need the distraction.

Jared Goff v LAC- Sean McVay is busy guessing the exact amount of toothpicks (420) that lay scattered on the floor of the asylum and McMurphy and the rest of the nuts are dancing around him. But riddle me this: if he’s one of the smart kids how’d he lose to Matt Ryan at home in the playoffs? You remember that one, Will Hunting? Little Man McVay could be out here writing symphonies or curing cancer, but instead he remembers wheel routes and stop and goes. Good job. Anyway, McVay will likely remember lots of pass plays from this one. Could be a shootout. Also, a shootout would’ve made Rain Man way better.

Giovani Bernard @ CAR- The Italian Stallion is back. He’s only 26 (27 in November). And the guy he’s replacing has a knee problem and knee injuries can take a long time to heal like a broken jaw. Bernard has a puncher’s chance to hang RB2 numbers. Just the knockout your team needs.

Aaron Jones @ WAS- I know he’s just back from his ganja suspension. And I know I smoke too much weed. You’re not my mother. But if you’re in a bind, you could do a lot worse than this guy. Let’s get medicated.

Chris Godwin v PIT- The soap opera in Pittsburgh is one of my favorite things about this season. The goiter under Fat Ben’s neck continues to go untreated. The AB and Le’Veon drama. This has all the makings of a foot race. Here’s hoping Pittsburgh gets lapped again.

John Brown v DEN- John Brown was sitting on his coffin on the way to his execution and he looked up and said, “This is a beautiful country.” Herman Melville called him the “meteor of the war” and his ideas, though radical, were concretely moral. Read about him if you get time and also the section about him in William Vollmann’s “Rising Up, Rising Down” is fascinating. I don’t know much about John Brown the WR, but it seems like double-digit targets are worth paying attention to.

George Kittle @ KC- Mahomes’ arm is so big it has its own dick. And that dick is bigger than Hercules’ dick. And he’s gonna be swinging it all over the Niners. Kansas City has given up the most passing yards in the league and the Niners’ their receiving corps is thinner than my excuses for why Jimmy G sucks. More like Jimmy uGh, amirite everyone? Don’t bother scrolling down because it gets worse from here.

HOU v NYG- They waltzed into Tennessee and lost to Blaine Gabbert. I’ve never been embarrassed myself, but I’m assuming this is the definition. But now they face the Giants whose entire offense is throwing to Saquon Barkley in the flat and praying he can break seven tackles.

Tyrod Taylor v NYJ- A friend sent me a stat that said the Browns haven’t won on a Sunday in over 1,000 days. I don’t have the energy to source this. But he could’ve said three times that and I’d believe him. That would be a great name for a book about them. The Cleveland Browns Story: 10,000 Days of Sorrow. Taylor could be in for a good game here, but if he’s not do you want to stare at his stat line for three days knowing you didn’t have to stream him? Find someone else. Maybe Fitzmagic Bandolz.

Chris Carson v DAL- As I’m writing this Carson is running in shoes made of honey while Bears feast on his remains. That’s right, I’m getting a two day headstart on my deadline. Carson also has a head start as a guy that’ll be on the wire if he doesn’t do something soon. Blame Denver on game flow. Chicago on a good defense. But the excuses are running out and he’s on the bench until further notice. And remember, excuses are like regrets: everyone has too many.

All Bills WRs @ MIN- They’re numbers look like they retired, not at halftime, but before the National Anthem. Speaking of taking a knee, do so here. If you are in a 18+-team league with triple-Superflex positions, I guess start Zay Jones as your WR4?

All Cowboys WRs @ SEA- Two entire teams with WRs so bad they might as well let Marky Mark tryout. Tavon Austin caught that long TD the other night and I thought, “Um, he might be worth a flier.” Then I took a long draw off my bowl and chased it with my Rusty Nail** and thought, “You’ve made enough mistakes in your life. Learn from them.”

Jack Doyle @ PHI- I’ve always maintained his name sounds like that of a 1920s boxer that lost in the title fight but won over the American public with his grit. But every Cinderella story must come to an end. And, inexplicably, it’s at the hands of the underachieving Eric Ebron.****

**I’m telling you right now Le’Veon been smoking the finest herb on the planet. And he’s resting his knees so he can help those lucky souls who weather these waters, win a championship.

***I suggest a 1.5 oz. to 1 oz. Scotch to Drambuie over one large cube. Highlands and Speysides are best, but that’s not to say something else doesn’t work. Winter is coming. This is the drink you’ll need for the fantasy playoffs.