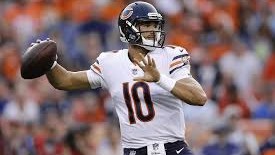 We were born. And we will die. These might be the last two facts on earth everyone is willing to agree upon.

What environment greeted us when we first arrived?

How lucky or unlucky was this fresh environment of ours?

What gives our stories their arc?

And what happens directly after death?

All questions with a myriad of answers—especially that last one. I haven't been this reflective and introspective since the first time I smoked weed. Which, I promise, wasn't right before I started writing this. I recently watched the 1972 Russian film, Solaris. I had never seen the remake. What struck me, aside from the obvious existential crisis splayed out above you, is how it reconfirmed this idea of how we must accept our realities, acknowledge our pain, in order to persevere amidst the chaos.

And accept the fluidity of it all. Accept the unknowns. Accept our responsibilities.

As one of the crewmen on Solaris said, "We don't need other worlds. We need a mirror."

Christian Kirk on a cracker, how bout that line?

I come to only a few conclusions after that film. We were born. And we will die. And we have to ride the waves because this whole thing is much bigger than each one of us will ever comprehend.

And, also, it's time to give up on Aaron Jones.

Mitchell Trubisky v NE- I didn't really want to put him on here because it seems obvious at this point. He's balling out and there's no reason to think this New England defense will stop anyone. The whole fucking unit is an embarrassment. Looking ahead in week 15, Trubisky gets the team that just made CJ Beathard look like Joe Montana. And then gets to face Beathard on championship week. Trubisky, a league winner. We can convince ourselves of almost anything if we want to. You can create your own reality, but the one staring back at you in the mirror is the only one that truly matters. Your circumstances make us different. But our destination is the same. The journey is sometimes worth being risky just for the hell of it, or should I say, Trubisky for the hell of it?

It doesn't get better from here.

Matt Breida v LAR- This beautiful specimen might not be human. Beat writers everywhere this last week said he was on the wrongside of questionable. Which is where I've foumnd myself most of my life. But he played despite these assurances otherwise. And he got in the end zone. Thanks for the head's up, media. I've heard of this thing they call fake news. That must be the only explanation. The media is plotting for my fantasy team to suck. Or maybe those beat writers bust their ass for shitty pay to bring you news about a multi-million dollar company that is about as transparent as the United States government so you have information to make decisions about your fake fucking team based off what is essentially a fake fucking team and sometimes these beat writers get things wrong or are smoke-screened into believing something because that's the narrative the multi-million dollar company is giving them. Nah, that couldn't be it. Fake ass shit.

Marlon Mack v BUF- They told us he'd be the starter. And he was. Score one for transparency. And this game might be done after the first quarter. Nathan Peterman is somehow still employed and feels worthy of cashing checks. It's not fair. For each interception he should have to payoff a random fan's debt. I bet he thinks twice about chucking it over the middle into traffic if there's a threat that he has to pay Josh Norwood's gambling bills, who is watching the game from Section 66, seat 6.

Tyler Boyd @ KC- Everything about this guy feels right. He's been wildly consistent with at least seven targets over the last five weeks. He has four TDs already and that pace might regress, but the targets will roll out as planned this weekend in this foot race. KC can't help but gorge themselves on everything, good and bad. Get ready to get drunk on these numbers. Get Mahoused, as it were.

Michael Crabtree v NO- You probably don't have a choice. You're likely starting this guy if you have him on your team. It's okay to admit it. Almost everyone's team is struggling with flex problems like an old man trying to tie his shoes. It's why I wear slip-ons.

Greg Olsen @ PHI- He caught 4-48 in his first week back. The foot doesn't seem to be a problem. And Devin Funchess has been good, but not great. Olsen is Swedish which is where the film The Seventh Seal was made. Like Solaris it draws on a great many pieces of art and literature, attempting to tackle the big questions. Perhaps the difference is Solaris suggests maybe thinking on it too much is the whole fucking problem. Who knows? You probably will never know. But know this: the tight end position is the ugliest one out there and that is saying something in this climate.

IND v BUF- The Winter has not rolled in over Gitche Gumee yet. But the gloom is on the horizon. Each morning it draws closer, creeping in as it always has. And always will. There would be a sadness in all of this. An almost melancholic warmth, but this franchise has continually proven it does not care about us. But they are finally ready to give back. Because every week you can stream a D against them. Even the Colts become an option.

Sam Darnold v MIN- Hard to believe he duplicates that act from last week against Minnesota. The Vikings are finally playing as we hoped they would. It'd smell like a trap game if it weren't for a rookie QB and a team seemingly ready to turn a corner. The North is theirs to win. We already tried to convince ourselves Trubisky will save the Bears. And the Green Bay defense looks like New England and Kansas City without the offense to match. But, if not, we should definitely call Darnold the Trap Queen for a few weeks. "I be in the kitchen cookin' pies with Darnold." Which reminds me, the Baker been preparing terrible treats. That's a different pecan pie altogether, though.

Carlos Hyde @ TB- Speaking of Browns to avoid, Hyde seems like a fade this week. Baker on the road and a Tampa team known for foot races screams no here. It's tough to sit a back whose floor is high so you would be blessed to have better options. You should consider yourself fortunate. Not everyone is afforded your opportunities. Sometimes the game comes to you. Sometimes it doesn't. Excuse me. I've been summoned to spend a month on Solaris. I hope they got weed.

Jordan Howard v NE- What a wasted season thus far. Should've we seen this coming? I was a buyer and a believer. I thought he'd see some targets and with Trubisky a year older he might find holes he never knew existed. But it's been dire and now he's in nearly a 50-50 timeshare, according to Graham Barfield on the Twitters. Perhaps it is darkest before dawn, but I think we are traveling at light speed away from the sunrise.

Albert Wilson v DET- This is what the nerds call recency bias. Or maybe not. I'm not smart enough to know and it's nearly midnight and tomorrow I have to mow the lawn because we are having my son's first birthday party this weekend. A fun filled weekend of my father-in-law making snide remarks about me being a stay-at-home dad and me drinking too much Scotch and telling him to go shit in his hat. Happy birthday, son. Don't grow up like either of us.

Corey Davis v LAC- What the shit happened in this game? More sacks (11) than completions (10). Stevie Wonder should sing the National Anthem at home games and then stay on to call plays. And the best thing is he will never be offended by anyone kneeling.

Cameron Brate v CLE- Hope you all got this out of your system. It wasn't going to happen. Quit hoping something good happens at this position. Eric Ebron is laughing at you. A long, shrill, perpetual laugh like the one you'll hear as you descend the steps of hell if you don't change your ways soon. Have a good week.