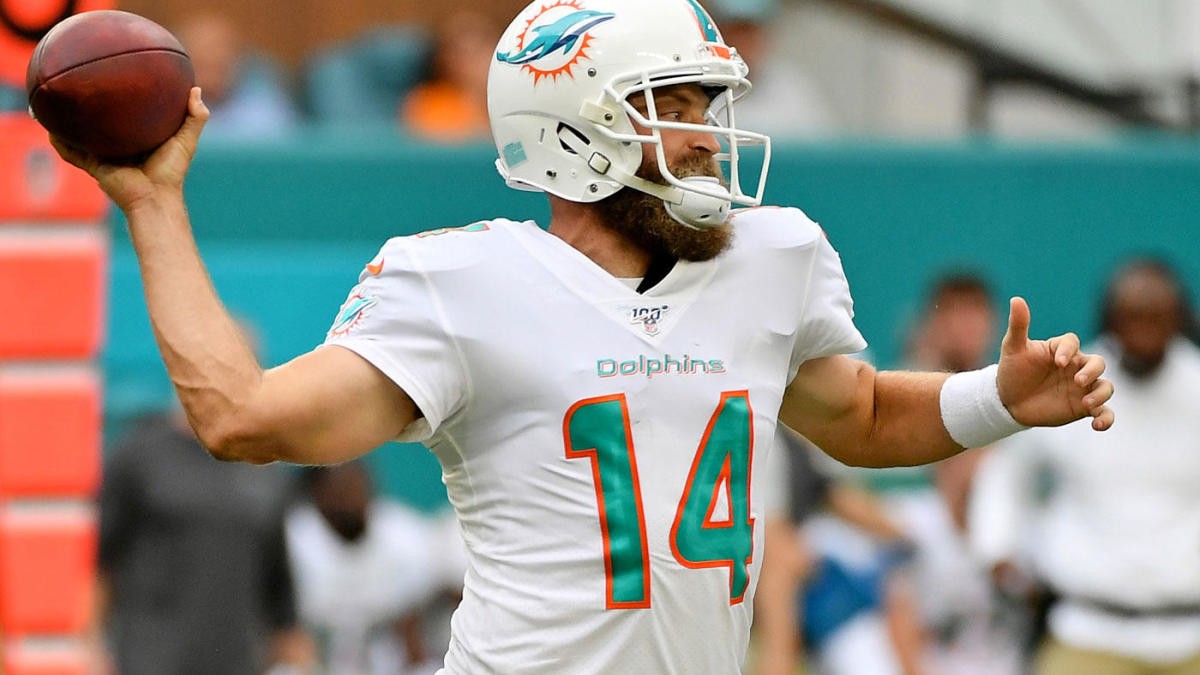 It sure is getting ugly out there in the streaming world. As the season progresses, the streaming choices get worse and worse. If you (for some reason) are needing to stream this week, rest assured that there are still a few options out there that could get you big numbers.

Am I completely confident in playing any of the quarterbacks I am going to list below? Ryan Fitzpatrick, I am. The other two are deeper league dives who are also athletes that have shown they are capable of having nice fantasy days.

These quarterbacks below are rostered in 50% or less of both ESPN and Yahoo leagues, so players such as Ryan Tannehill and Philip Rivers will not be showing up in this article. Those are both players I would have listed in this article if their ownership fit the criteria.

Ryan “FitzMagic” Fitzpatrick continues to pull rabbits out of his hat each week. Leading the Miami Dolphins, he has had solid outings over the latest four games. The Miami quarterback tallied 20 or more points in three of his past four games, and the one game he did not hit that mark was the game he lost his primary target, Devante Parker, to a concussion. In the three games he has been on the money, the field general succeeded in passing for multiple scores.

This week, the Miami Dolphins are facing a Cincinnati Bengals group that has given up more than 19 fantasy points per contest to the quarterback position. That defense is also conceding the ninth most fantasy points to QBs in 2019. On top of that, Cincinnati is hemorrhaging yards, allowing the third-most yards per attempt this year. This should have Fitzpatrick licking his chops (although not sure I suggest that given the beard).

Spanning the last two weeks, Fitzpatrick has been able to run for 98 total yards while also throwing for 300 yards in the last three games he has played (not simultaneously, of course). Fitzpatrick has the upside with his feet and can throw a strong ball. One of the more significant things for the quarterback was that his star pass-catcher Parker returned last week. The two touchdowns Fitzpatrick tossed in week 15 were hurled to Parker. Watch for both Fitz and Parker to have tremendous games this week.

Jumping from one man with facial hair to another, Gardner Minshew is the next streaming quarterback to make this list. This contest, Minshew will be facing off with the Atlanta Falcons in Georgia. Atlanta’s defense has been having a rough go at it over the latest cluster of weeks, losing both cornerback Desmond Trufant in the week 13 match and edge defender Takk McKinnley in week 15 to injury.

The Falcons defense is less than stellar this year, and they have not been putting pressure on their opponent at quarterback. The defense is letting quarterbacks have the fifth-most fantasy points in 2019, and Minshew will try to capitalize on this.

Minshew’s stat line from week 15 had him complete 17 of his 29 passes for 201 yards through the air while rushing for 27 yards. The pigskin tosser also launched two scores in that game. If wideout DJ Chark is indeed back this week, Minshew’s numbers will be better. The fact that the Jaguars will be competing in Atlanta (a dome stadium) will benefit the mustached gunslinger. You are not going to need to worry about weather being a problem with Minshew this contest.

This right here is a Hail Mary. Dwayne Haskins is only suggested as a starter in leagues that are deep or are two quarterback/superflex. Hopefully, there are other more desirable options to obtain, but this is your play if in a jam.

Haskins has proved he can hurl the ball down the field. In his last game, a loss to the Philadelphia Eagles, he flung two touchdowns. He had a career day as well, tossing for 261 yards. In that game, his passer rating was 121.3, so take that for what it is worth.

There is not much to say about Haskins to persuade you to stream him this week, but do remember he has the stunning wide receiver Terry McLaurin. That alone should make you feel confident. McLaurin can catch the long ball as well as score touchdowns, so this should help enhance Haskins’ statistics. The Redskins are matching up against the New York Giants, so Haskins to McLaurin should be a phrase you hear all day. If you can get that stack going, things will look even more up for your team.

This week, streamers are far and few between. If you made it to the championship, odds are you are not needing to stream. If you are wanting to stream, look for guys like Fitzpatrick, Tannehill, and Rivers on the waivers. Those players may not be available in your league, so you could have to move on to one of the less reliable streamers. Either way, I want to wish you all good luck in your week 16 contest(s).

As always, give me a follow over on Twitter @thekaceykasem. If you have fantasy questions, I will try to get to them.