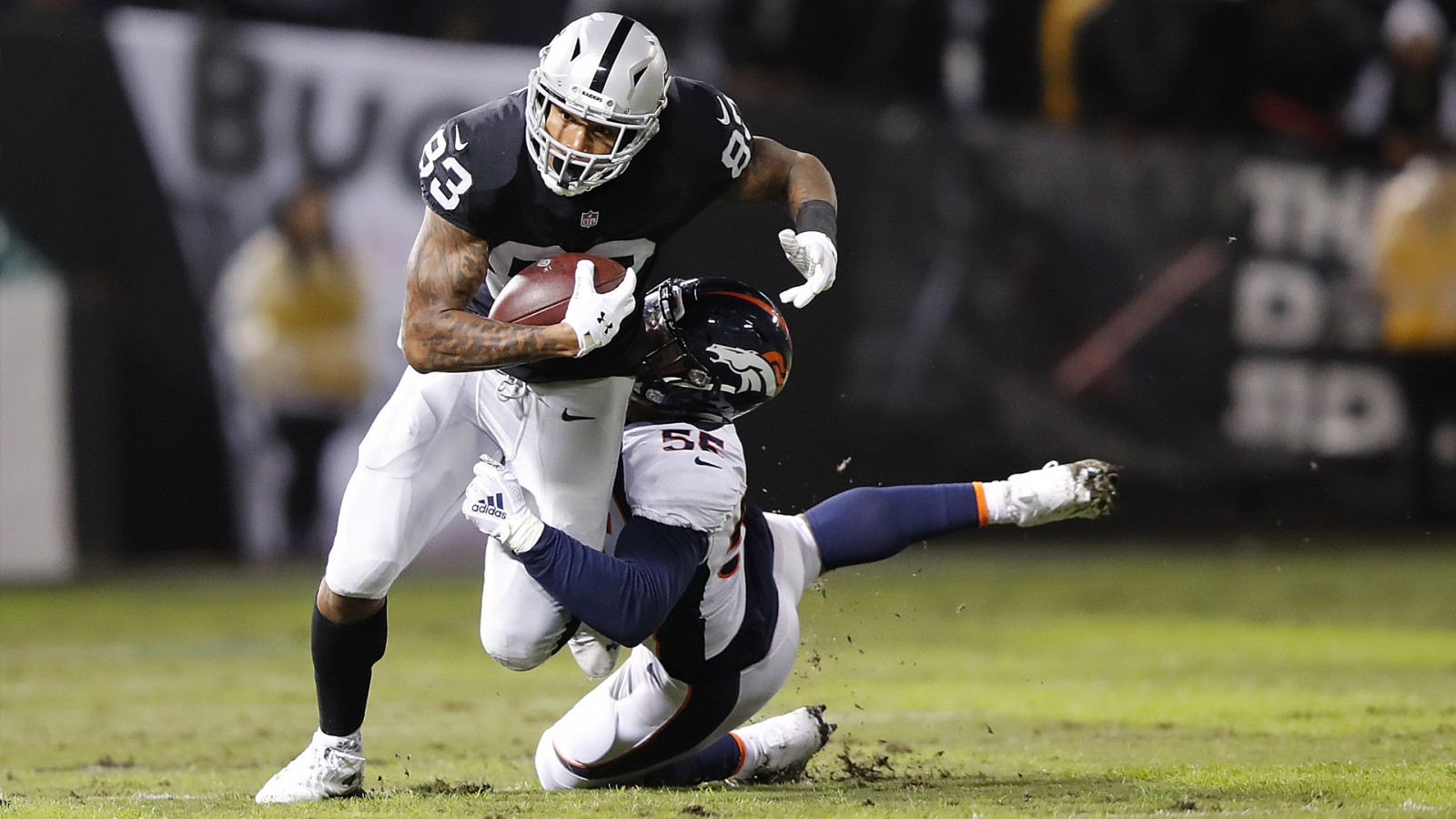 Tight end is one of the more up and down positions when it comes to fantasy football. Unless you have one of the big three (Travis Kelce, Zach Ertz, and George Kittle), you might be there scratching your head. Last season, it was the same way, but there were constantly waiver wire gems that could assist you based on the match-up. One of my preferred positions to stream is the tight end spot because of how unpredictable it is.

There are plenty of boom or bust players, but hopefully, you’ll figure out how to predict when they will boom so you can utilize them. Below are four of my favorite streaming options at tight end for week one that are owned in 50% or less of ESPN and Yahoo leagues.

This is one of my prime streamers of the week. I was high on Darren Waller as a starter since before the season even started. I also recognized that he would be available on waivers for situations just like these. Waller has that sturdy build you love to see in your starting tight end. 6-foot-6 and 255 is precisely the kind of guy you want at this spot. He has had wonderful chemistry with quarterback Derek Carr during training camp, something that is going to work in his favor with Antonio Brown up to his Antonio Brown ways.

Carr enjoys checking down to his tight end (look at Jared Cook last season). Cook saw himself being the fourth overall tight end last season in fantasy. If Carr finds himself in trouble, he can regularly be bailed out by his security blanket.

Keep in mind that Luke Willson was recently let go from the Raiders organization, so it seems Jon Gruden and company like what they have in Waller. I see Waller not only having an astounding game in this opening match-up versus a Denver defense that likes to give up points to tight ends, but he could also end up being a dependable starter for the remainder of the season.

In case you were living under a rock, Tyler Eifert is healthy as of right now. This is not something we see frequently, so you should jump at the opportunity to start the Cinncinati tight end. He presumably will not be healthy for a large portion of the season if history replicates itself, so make sure to take advantage of having a healthy Eifert while you can.

He is an outstanding tight end choice when he is on the field. The Bengals are taking on the Seattle Seahawks this week. Seattle is a noisy stadium which can make Cincinnati quarterback Andy Dalton have concerns, but getting the ball out to Eifert will help calm his nerves. Seattle has been known to give up points to tight ends, so this makes for an intriguing contest.

The Bengals are currently without hurt star wideout A.J. Green, so they will need someone to grab his targets. Eifert appears to be the perfect person to rely on in this circumstance. Tyler Boyd might see more attention from the defense than he is used to, so Eifert could be a worthy weapon on the inside. When Eifert has been well, he has seen his fair share of red-zone targets. When healthy, Eifert averages five targets a contest. Before becoming hurt in 2016, he was notching an additional target per game. Feel free to secure Eifert in your lineup now before he finds himself off the field again.

He’s back. Jason Witten retired, then unretired, and this is excellent news for you if you require a streaming tight end this week. Although the 37-year-old has been out of the game for a season, he has come back to his former team and fit right in with the offense. During the two-minute offense in training camp and practices, Cowboys quarterback Dak Prescott made it a habit to throw to the pass-catcher a ridiculous number of times. He can be a red-zone menace since Prescott has been connecting with him there.

His preseason was solid, especially considering he was in the booth last season. At wide receiver, Amari Cooper has been dealing with a foot injury that has not allowed him to practice as he should. Ezekiel Elliott just signed his extensive contract, but there are still unknowns when it comes to how Dallas is going to utilize him this week.

The New York Giants did get stronger on defense this season, drafting seven defensive players in this year’s draft. They also picked up Antoine Bethea, Jabrill Peppers, and Markus Golden. Even with an enhanced defense, their offense runs through Eli Manning. If Dallas’ defense forces Manning to turn the ball over, the Cowboys offense should be on the field for a healthy portion of the game. That will give Witten the shots he needs to get you fantasy points.

Here is an exceptional dart throw if you are contemplating a sleeper tight end. Washington’s tight end Jordan Reed is in concussion protocol, but that appears to be a trend when it comes to the gifted tight end. When healthy, Reed is a force to be reckoned with. When injured, tight end Vernon Davis fills in for him quite admirably.

Reed was banged up in the preseason game against the Atlanta Falcons, and it is unclear if he will be able to go on Sunday. The starting tight end Reed is owned in over 50% of leagues, so there is a possibility you have him on your roster. If that is the case and Reed can’t go, Davis looks to be a competent replacement. He is scarcely rostered, so you will be able to get him easily.

Davis has the expertise to be a satisfactory tight end on your roster. He has been in the NFL for 14 years. At 35 years old, he is still doing things he was doing when he was younger. In the latest two seasons that he has played, he has been thrown to for four or more times in 11 separate games. He is not even the starter when the season commences, but he still manages to be targeted. Davis is a steady tight end when he is playing, and he should put up points if Reed cannot go.

There are lots of tight ends available that could be deemed streamers for the week. The tight end position is so fickle that you never know if a guy is going to have a wonderful game. As I write this article, Jimmy Graham has 12 fantasy points in the Thursday night game with 13:35 left in the game. No one could have imagined that Graham would be doing what he is doing. This just proves how all over the place the tight end position is.

If an option such as Austin Hooper, Delanie Walker, or Mark Andrews is available on your waiver wire, I would also take a shot on them. They are rostered in more than 50% of leagues, but they could still be available.