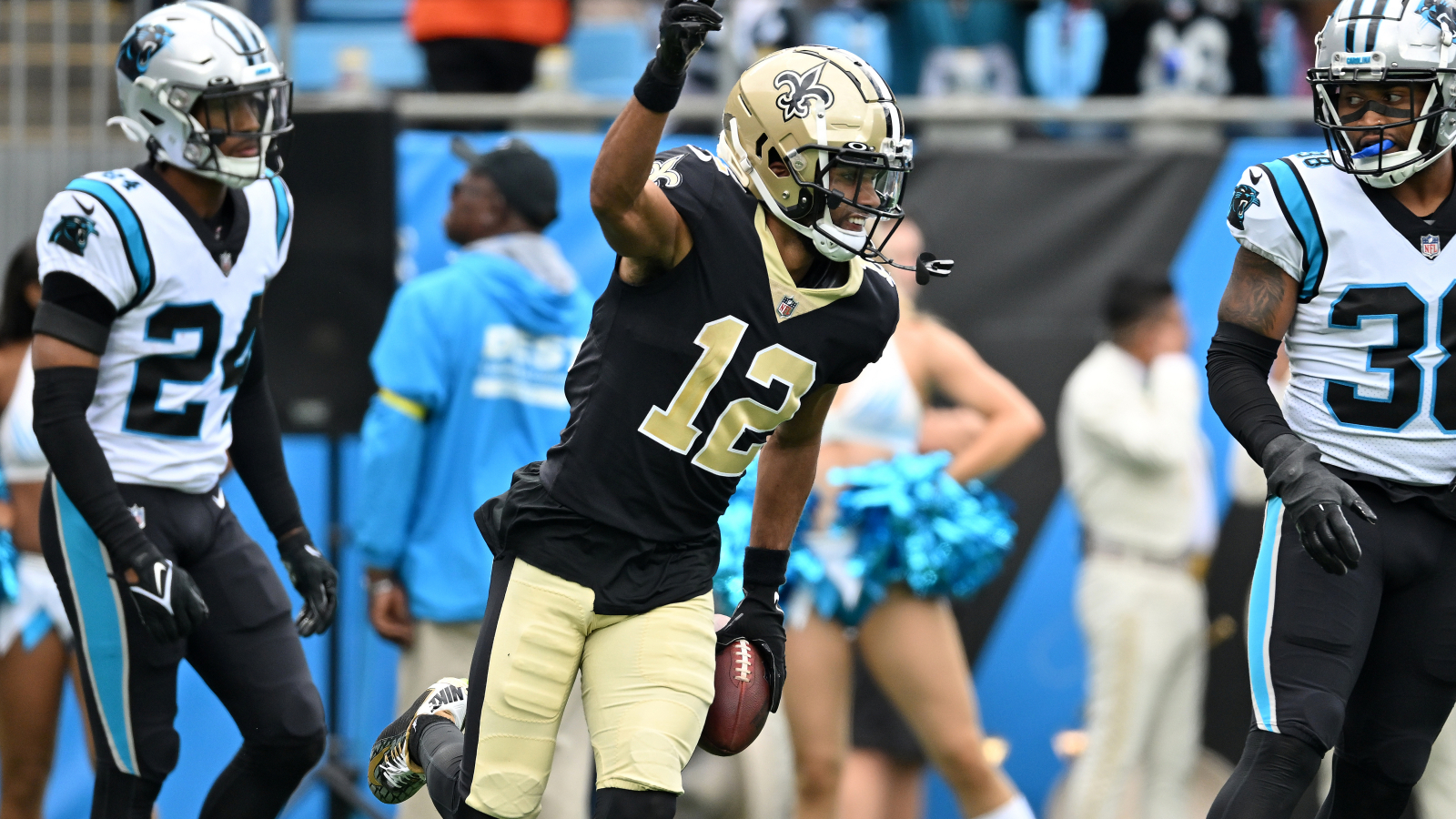 Week 10 is here and the cream starts to rise to the top! If you are still reading these, you're hustling your way to the playoffs.  Remember, you're starting your studs no matter what. Don't get cute by sitting them over the players you see here.  This article focuses on who we feel can give you an edge this week.

It used to be that a trip to Lambeau Field in mid-November would spell trouble for a team, but this year's Packers are a less formidable foe.  Dak Prescott has been solid against the Packers as well throughout his career, with a 102.4 QBR in four career games.  Don't let Green Bay giving up the 8th fewest points to quarterbacks scare you as this unit has given up 2 touchdown passes every game in the last 3 games.  - Matt Miles @DirtyAirFC 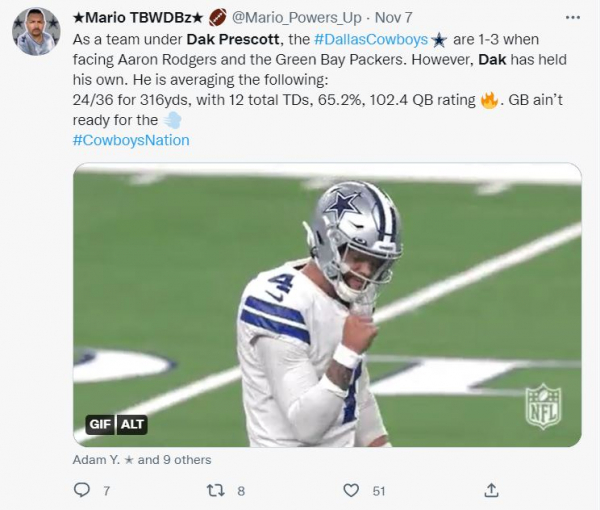 Don’t look now but I think Justin Fields is still rushing for big gains against Miami. What a display of running at will did Fields showoff last week versus the Dolphins. Fields set the record for most rushing yards by a quarterback in a game with 178 yards. Fields was even named Offensive Player of the week, and rightfully so. The second-year quarterback’s fantasy point total for Week 9 was so impressive that it was greater than his first four weeks of the season combined. The Bears are going up against the Lions this week who are not only allowing the fifth-most fantasy points to quarterbacks, but they also allowed Jalen Hurts to burn them for 90 yards rushing of his own. Fields is a start for this week and beyond! - Leo G. @smooth1074

This season, Justin Fields has more

Maybe you can get first-half Derek Carr and the Colts will roll over in the second half, but adding one of the NFL's best wideouts in Davante Adams has not helped Carr.  Carr has been abysmal with a 57.3% completion rate over his past 3 games. If Indianapolis feels they can make a statement with their new coaching staff, The Raiders are their best opportunity to do so.  - Matt

Over the last few weeks, Justin Herbert has not been the same quarterback that we have seen over the last couple of years. He has failed to throw for over 300 yards over the last month of the season. That’s what kind of happens when you are missing your top two wide receivers. As of today, it looks like neither Keenan Allen nor Mike Williams will be back this week. Add the fact that Herbert is facing the 49ers' defense that has allowed the fourth-fewest fantasy points to quarterbacks and that makes Herbert a sit for me in Week 10.  - Leo

Are the #Chargers using Justin Herbert in a way that maximizes his talent? the short answer is heck no. pic.twitter.com/s65dPMz0KW

Donovan Peoples-Jones has quietly cemented himself into the WR2 role in Cleveland, earning target share and winning contested catches with just one drop this season. Look for DPJ to continue his stable floor as a plug-and-play WR2. -Matt

To start off, Chris Olave has a juicy match-up this week. Olave goes up against the Steelers who allow the most fantasy points to wide receivers in 2022. Olave has been money this year, no matter who is behind center for the Saints. In his last seven games, Olave has averaged nearly 10 targets a game and compiled 40 receptions, 577 yards, and two touchdowns. Not bad for a rookie. Start Olave with confidence, even with Andy Dalton under center. - Leo

Indianapolis is looking like a disorganized mess, and we'll be facing some uncertainty with new coach Jeff Saturday and some of the worst quarterback play in the NFL. We preach don't sit your studs, but this might be an exception. - Matt

Most fantasy managers will want to insert Terry McLaurin in their starting line-ups since he is seeing eight targets per game over the last three weeks. The one factor that should lower expectations for him this week is his opponent. The Eagles' defense has allowed just 177 yards passing per game this season and McLaurin may see a heavy dose of Darius Slay on Sunday. If you have to play McLaurin think of him as more of a flex play if anything. - Leo

This is a pure speculation play with the pending Josh Allen injury news, but Devin Singletary is getting the bulk of snaps in Buffalo, and the Bills won't be afraid to grind it out with their platoon of backs until Allen can play again.    - Matt

If Jeff Wilson's debut is any indication of how he will perform moving forward for the Dolphins then sign me up for that. After being traded to Miami last week prior to the trade deadline, Wilson came in and played 50% of the snaps. That was already four percent more than Raheem Moster had. Wilson ended up with 16.40 PPR fantasy points in Week 9 and looks to have another great match-up this week against the Browns. Cleveland allows the fifth-most fantasy points to running backs this season, giving fantasy managers the green light to get Wilson in your line-ups this week. - Leo

In his first game with the Dolphins, Jeff Wilson Jr. earned the lead job.

Wilson is four years younger and has familiarity with Mike McDaniel's offense. 📈

After a Week 8 pop, D'Onta Foreman fizzled week 9.  Despite Chuba Hubbard being ruled out, Foreman garnered just 7 rushes for 23 yards and 2 receptions for NEGATIVE 2 yards. Woof.  Hubbard could be back, and Atlanta isn't a pushover in the run game, allowing just the 15th most points to fantasy running backs this season.  - Matt

The Packers in general have been a dumpster fire this season, and A.J. Dillon is one of the flammable objects in this dumpster fire. Dillon has not produced double-digit fantasy points since Week 1, which was also the last time he found the endzone. If that wasn’t enough for you to sit Dillon, he faces the Cowboys' defense that allows the second-fewest fantasy points to running backs.   - Leo

It’s been AWFUL for AJ Dillon managers. Honestly if it wasn’t for name brand and ADP he wouldn't be rostered in 89% of Yahoo! leagues. He scored 20 ppr points in WK1 but is the RB44 in per game scoring since (min 3 games). He’s a desperation flex vs DET albeit one with upside.

Cade Otton seems to be emerging as a trusted target of Tom Brady.  Otton had caught Brady's 100,000th-yard pass and had a touchdown called back last week.  The Bucs are home against the Seahawks, which yield the second-highest fantasy points to tight ends.  - Matt

One of the most pleasant surprises for the Broncos and fantasy managers this season has to be Greg Dulcich. The man is a straight-up baller. After missing the first five games of the season due to being on the IR, Dulcich has seen his involvement in the offense steadily grow. The tight end has helped Russell Wilson and the Broncos' offense improve. Throw in the fact that Dulcich gets to play against the Titans who are allowing the seventh most fantasy points to tight ends this year, and that makes Dulcich a start for me. - Leo

The freshly traded TJ Hockenson showed well for the Vikings last week in their matchup against the Commanders, however, this week is a tougher match-up with the Buffalo Bills, who allow the 10th fewest fantasy points to tight ends. The Bills kept Mark Andrews to two catches for 15 yards in Week 4.  - Matt

As mentioned above the Chargers face the 49ers this week, and they should be a hindrance to the entire passing game. With no Williams and possibly no Allen again, this could be a tough outing for Gerald Everett. Everett has had only one double-digit fantasy point outing over the last four games. The Niners do a pretty good job defending tight ends, by allowing the ninth-fewest fantasy points against the position. So if you have another option to insert in the starting line up like Dulcich or Cole Kmet do so if you can. - Leo

The New York Giants D/ST face the Houston Texans this week, a team that has given up seven sacks, four turnovers, and a defensive score over the past three weeks. With a tough weather forecast for New Jersey this weekend, The G-Men will make life miserable for the young talent visiting from Houston. - Matt 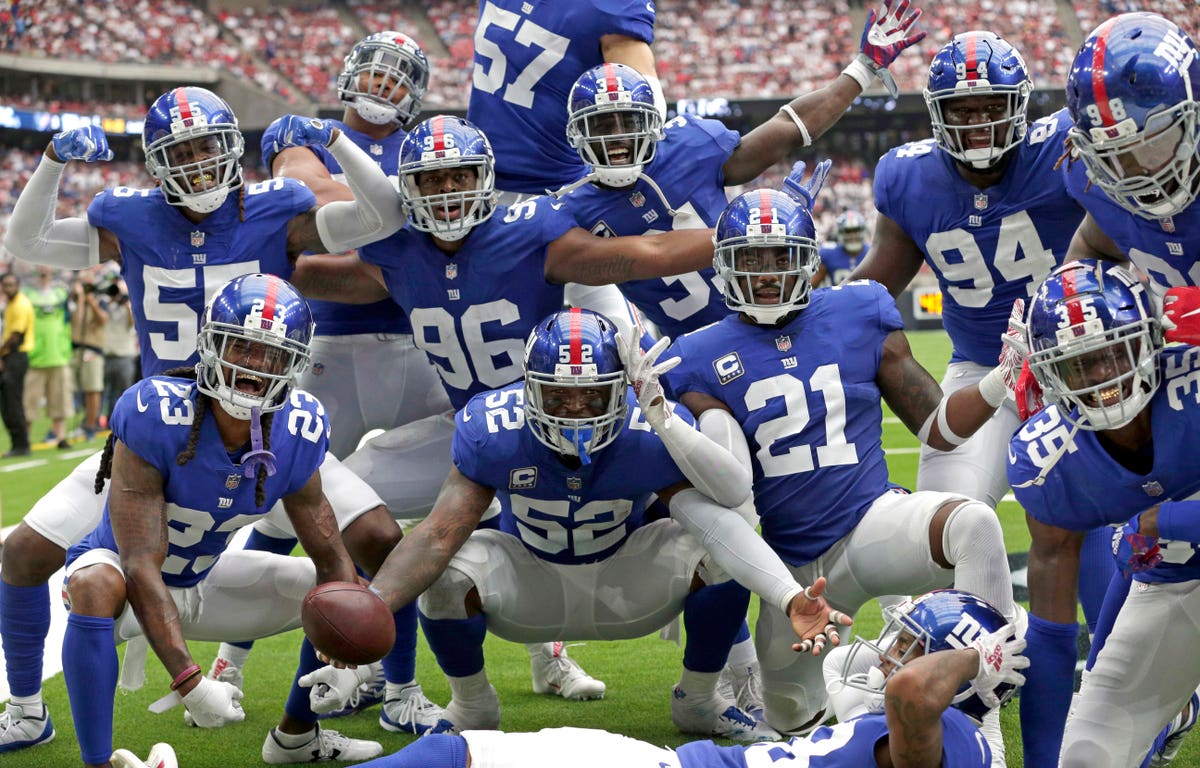 The Saints as a whole have been up and down all season long. But if you are looking for a defense to stream in Week 10, check to see if the New Orleans Saints D/ST is available. This Sunday they are going up against a Steelers team that has been very generous to opposing defenses by allowing them to score the third-most fantasy points. The Steelers allow multiple sacks per game and have turned the ball over 14 times so far this season. - Leo 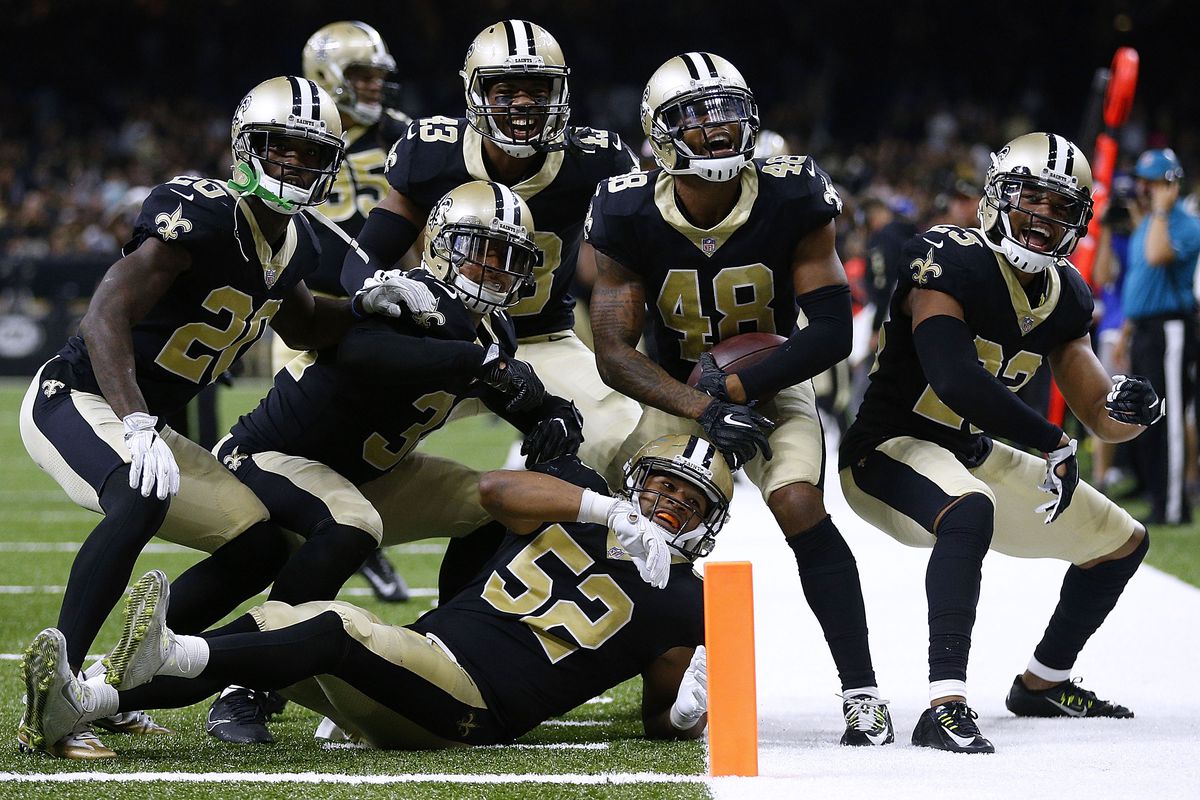 Don't let the match-up fool you. Despite Arizona having a lackluster offense, their match-up week 3 yielded only two sacks and no turnovers.  The disappointment of the defending Super Bowl Champion defense will continue this week. - Matt

Now, this call to sit the Minnesota Vikings D/ST this week is contingent that whether or not Josh Allen plays. With Allen in the line-up, the Bills allow the sixth-fewest fantasy points to opposing defenses. So monitor Allen’s elbow injury leading up to game time. - Leo