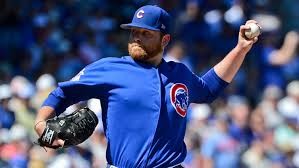 I know it only has been one week, but some of us are already having troubles with our fantasy teams. Whether it be injury, or just having tough opponents, it hasn’t been a good start for some people. And while most will tell you not to panic after one week, some people still panic after one week. If you are looking for a pitcher to plug into your lineup for just a single start and are already streaming pitchers, here are some solid options for this Wednesday, Thursday, and Friday that should be owned in less than 50% of leagues. Please follow me on Twitter @fightingchance. Blake Snell still has plenty of room to grow, but I like him in this matchup against the Yankees and a rookie pitcher

Blake Snell, Tampa Bay Rays (vs. Jordan Montgomery; NYY). This one is a bit of a risk as Snell showed his inconsistency in his first start of the season with five runs and five walks. The kid is ultra talented though, and has the chance to dominate a game. The Yankees will definitely be without Gary Sanchez, and Greg Bird could still be out as well. Rookie Jordan Montgomery will be making his MLB debut, and the Rays pitching held the Yankees offense mostly in check last week. I like Snell to have a good start on Wednesday.

Amir Garrett, Cincinnati Reds (vs. Ivan Nova; PIT). Garrett was very impressive in his season debut, after being one of the top 100 prospects coming into the year according to MLB.com. He allowed just two hits and no runs to the Cardinals in picking up his first win. It won’t be easy for him this time out against a pretty solid Pirates offense, and a very capable pitcher in Ivan Nova. However, I don’t think hitters have enough of a book on him yet, and Garrett still has the advantage over hitters. Look for him to pitcher very well again and get at least five strikeouts.

Brett Anderson, Chicago Cubs (vs. Hyun-Jin Ryu; LAD). I would like to state that I am not a Brett Anderson fan by any stretch. He is extremely injury prone, and his strikeout rate has fallen as the injuries have piled up. However, he did have a good first start, and he is pitching for arguably the best team in baseball. Even if he doesn’t have his best stuff, there’s a solid chance the Cubs will score enough that he at least gets the win. I know that isn’t a ringing endorsement, but the Dodgers can’t hit left handed pitching, and Ryu is still working his way back from injury. He isn’t going to throw a no hitter, but Anderson should give you a solid start.

Jordan Zimmermann, Detroit Tigers (vs. Phil Hughes; MIN). Zimmermann was absolutely horrible last season and lost faith of pretty much every fantasy player. I am not going to throw him to the curb I'm expecting a solid year from Zimmermann, including this matchup agains the Twins!

just yet, and I think he is a far better pitcher than he was in 2016. I’m not saying he will be a Cy Young contender but I expect him to be useable. He got the win in his first start of the year where he allowed just one run in six innings. He pitches on Thursday against the Twins who we all know are not exactly the most offensively powerful team in baseball. Phil Hughes had a solid first start, but certainly isn’t the kind of pitcher you try to stay away from in fantasy baseball matchups.

Daniel Norris, Detroit Tigers (vs. Trevor Bauer; CLE). When healthy, Norris has been a very serviceable fantasy starting pitcher in his career. He has the tendency to put a few too many people on base, but in 26 starts in the last two seasons his ERA has been in the mid 3.00s. He faces the Indians who put up only seven total runs in three games over the weekend. Trevor Bauer gave up four earned runs in 5.2 innings and isn’t the strongest opponent. Norris was solid in his season debut against a tough Red Sox lineup, and I look for him to be good again.

Mike Foltynewicz, Atlanta Braves (vs. Jhoulys Chacin; SD). Folty came down the stretch strong in 2016, and had a solid Spring until his last start. He might be a little too hittable, and he wasn’t great at all in his first start of the year, but he still has some pretty good stuff. He faces the Padres who have only scored more than four runs once this season, and even though he had a good first start, Chacin sucks. Even if he does give up a few runs, Folty should get you a good number of strikeouts and be worth the use.