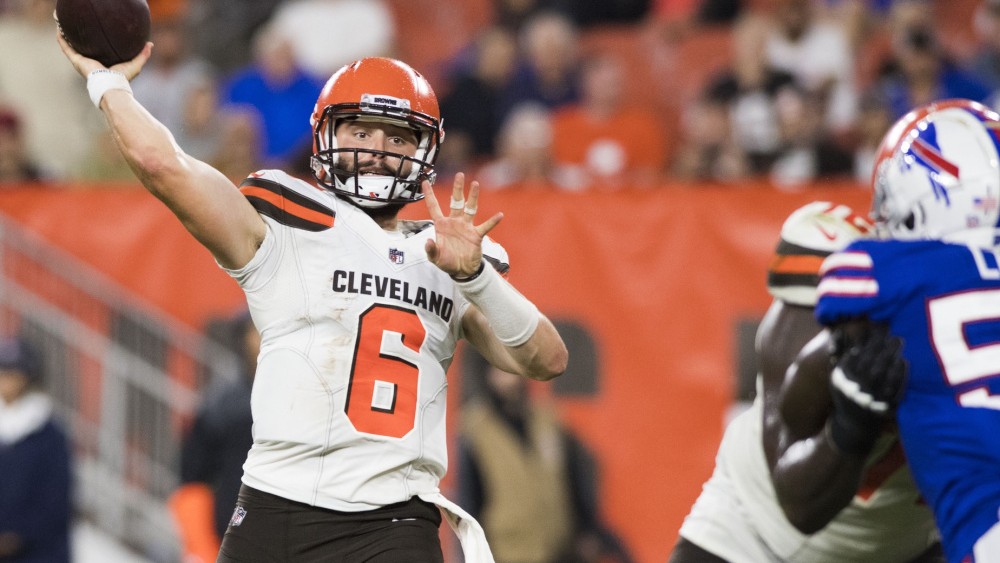 All right, let’s move on from week three and get our sights set on week four. Week four is the first time you have to deal with a bye week this season. Cam Newton won’t be in your starting lineup, and you can also put Alex Smith on the bench. Both of those guys have bye weeks, so please don’t make the mistake of firing them up this week. As I stated, Jimmy G is out for the season, so you’re probably reading this through tear filled eyes. Never fear, there are viable quarterback streamers available on the waiver wire, and someone is bound to save the day.

Baker Baker, touchdown maker. Here’s your first streaming option of the week, but he could also be a starter for you in games to come. Baker Mayfield lit a fire under the Cleveland offense after Tyrod Taylor went down with a concussion. Mayfield came in for a little over a half and managed to throw for 201 yards as well as catching a two-point conversion. Not only that, but he completed a whopping 74-percent of his passes. His throws went for a total of 8.74 yards per attempt. He managed to use his weapon Jarvis Landry to the fullest at eight catches for 103 yards. The run game was explosive and Mayfield led three different touchdown drives.

Before leaving that game, Taylor only connected on four passes out of 14 for 19 total yards, so there was a large chance he would be replaced by Mayfield sooner than later. Now Mayfield has officially been named the starter. We didn’t have to go back and watch the tape to know that should be the case. He was able to help Cleveland get that first win since December 24, 2016, so you know the town of Cleveland is having a blast with this. This week, Mayfield and company take on the Oakland Raiders in Oakland. That Oakland team is currently sitting at zero wins, and the defense has given up an incredible 20-plus points to two of the three quarterbacks they have taken on. Look for Mayfield to build on that awesome Thursday night game and put up points after a long rest.

No one would have guessed the Miami Dolphins would be undefeated going into week four. Well, maybe Ryan Tannehill would have, but I doubt that is even the case. Still, Tannehill has been playing some of the best football of his career. He is currently 10-1 in his last eleven games. Last week he pulled off the best performance of his 2018 season with a 17-of-23 passing game, throwing for 289 yards as well as three touchdowns. A running back wasn’t even the leading rusher for the Dolphins, but instead, Tannehill took that honor with 26 rushing yards on three attempts. He also happened to connect with Albert Wilson for a 74-yarder that went for a touchdown.

This week, Miami takes on the Patriots. The Patriots embarrassingly lost to the Detroit Lions on Sunday night. Tannehill has been able to run the ball more often than a lot of field-generals, and his running backs have not been able to get anything going. Tannehill has a 73-percent completion rate and has gone 9.3 yards per pass attempt. He looks to keep that momentum going into the week four contest. The Patriots have not been good against the fantasy quarterbacks they have played in 2018, and this could be beneficial for Miami’s passer as well. In the last four matchups with New England, Tannehill has been able to throw for at least 300 yards. Even though he is winless in five straight starts against the Patriots, he still was able to accumulate fantasy points in those meetings. He looks to do that again in week four.

Andy Dalton might be on this list every single week, so it’s probably easier for me to just copy and paste previous articles than it is to type up the same things about how Dalton is a decent streamer. I’ll give you a little more than that though. Dalton did not have a good week three, where he managed to have four interceptions. That looked brutal, but he still achieved 352 yards and two touchdowns. He has had two touchdowns in each of the first three games, so he is on the right track to do it again on Sunday.

I’d suggest Dalton as more of a streaming option if his major target A.J. Green is able to go. He suffered a groin injury in week three, so his status is currently up in the air. Green wants to play, but it all depends on whether or not he is healthy enough to participate. Something that Dalton has on his side is that the Atlanta Falcons defense, who he is up against on Sunday, has been dealing with injuries themselves. Keanu Neal, Ricardo Allen, and Deion Jones have all gotten hurt, so they will be lacking on Sunday. And speaking of injuries, Joe Mixon continues to be injured, so less Mixon means more Dalton throwing passes.

Here’s your “start Eli Manning at your own risk” suggestion for the first time this season. I was a huge fan of Manning coming into the season because of all the weapons he has around him, but he has not been able to live up to my standards (don’t think I’m hating because he’s a Giant as Dak Prescott has definitely not lived up to my standards either). Here’s the deal; Manning was able to look pretty good in Sunday’s game. He completed 25 of his 29 passes, tossing the pigskin for 297 yards and two touchdowns. The Giants actually beat the Texans with a score of 27-22, so they got their much-needed mojo back.

Manning was able to target six different weapons during Sunday’s contest. He hit Odell Beckham, Jr., his number one guy, for big gains during that game. The Giants’ play-caller hasn’t been a startable option thus far, but based on his performance Sunday, you could plug him in lineups with 2QBs or large leagues. The Giants play the New Orleans Saints who have allowed an incredible 341.7 yards per game and have also given up ten touchdown passes through three games. This is a dart throw, but it could pay off for you in the end.

Other quarterbacks who are not 100-percent owned include Ryan Fitzpatrick, Alex Smith, Matthew Stafford, Matt Ryan, Jared Goff, and Philip Rivers. Those are all start-worthy quarterbacks, so if they are up for grabs in your league, you should take a look at them. They are highly owned, but surprisingly not over 90-percent, so you have a chance to get them. Bye weeks are going to come at you full force, so check back next week to find out who is worth a stream in week five.