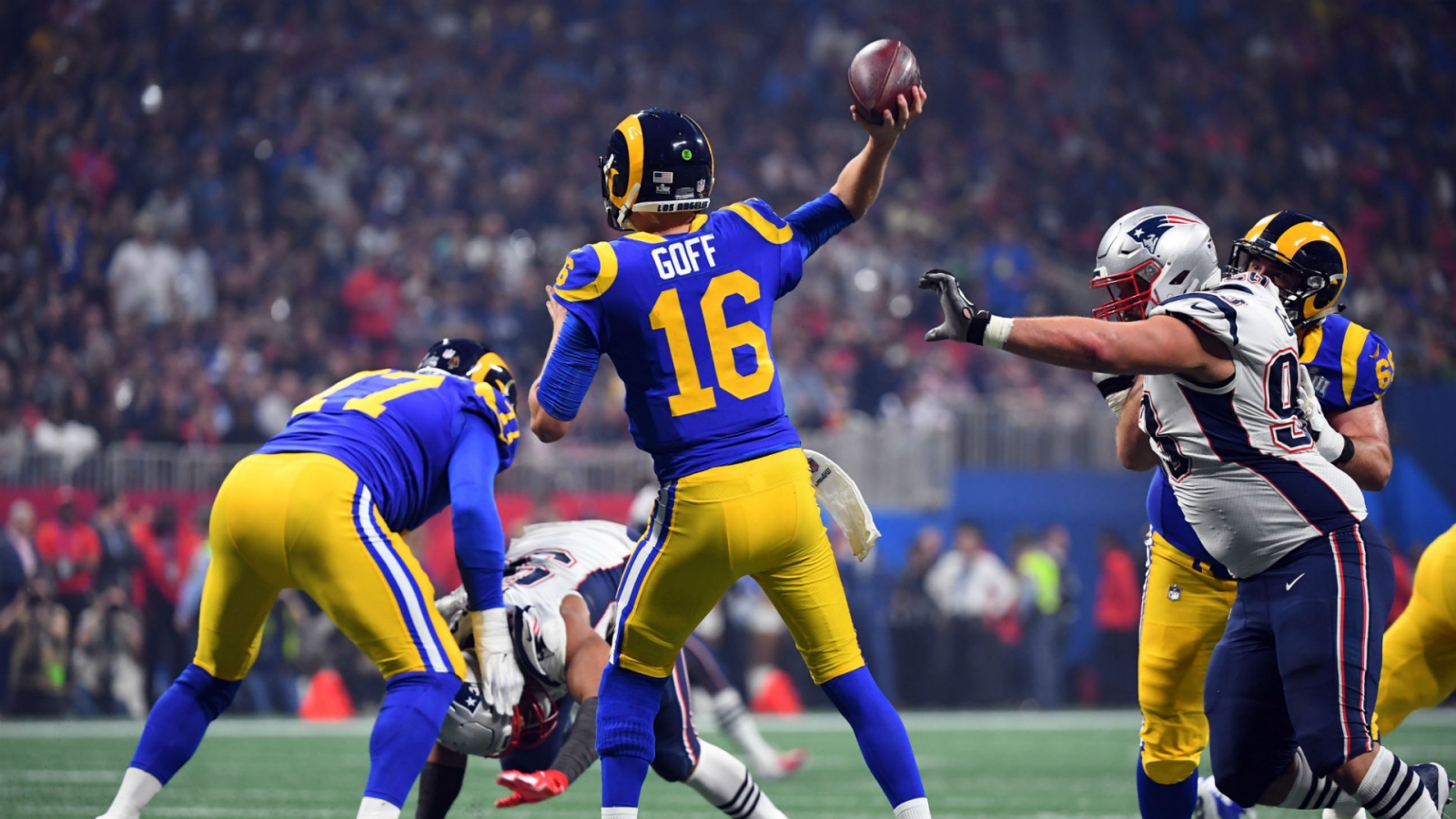 The Late Round Quarterback: Jared Goff

In your draft this year, there’s going to be people that are going to be jumping on Lamar Jackson and Patrick Mahomes in the first and second rounds. Drafting one of the top quarterbacks is always fun at the moment but at the end of the draft, you might look back on your team and realize you have some deficits. The best stat I can throw out there to advocate for the late-round quarterback drafting strategy is that from Week 6 on last year, the top quarterbacks in fantasy were, Lamar Jackson, Ryan Fitzpatrick, James Winston, Ryan Tannehill and Dak Prescott. None of them were drafted early and Fitzpatrick and Tannehill started the year as backups. You never really know who might break out.

Before we get right into it let’s look at a few things. To hit on late-round quarterbacks there are a couple of things to look for in the guy you want to draft. In the last two years, we’ve seen a couple of second-year quarterbacks take the big leap and win leagues. Patrick Mahomes and Lamar Jackson went from late-round picks to the QB1. Those young quarterbacks are one of them. They are still being left down boards because they haven’t broken out yet and are great candidates to breakout and become great values. The other thing to look for is high volume brought on by a bad defense or high powered offense. Last season we all had the privilege of witnessing the Jameis Winston Experience. He threw 30 interceptions leading to high volume from playing behind and finished as the QB5. In this article, we’ll look at a quarterback that had a ton of volume last year and should flow into this year and why he is a good late-round quarterback.

Last season, Jared Goff was the QB13 after throwing the ball 626 times for 4,638 yards with 22 touchdowns. Despite this, it was a somewhat disappointing season from Goff as the 22 touchdowns ranked 18th In the league and he threw 16 interceptions which was the fourth-highest total. His touchdown percentage was only 3.5%, 28th in the league, and interception percentage was 2.6%, 22nd. All of this is plenty of reason to be scared away from Goff but if we look back to 2018, he finished as the QB7 when his team threw the ball 568 times, 60 fewer attempts than in 2019 and was still able to be efficient enough to be the seventh overall quarterback. It’s also encouraging because his touchdown percentage and interception percentage were nowhere near the top of the league but he still finished just outside the top 12 leaving plenty of room for improvement in fantasy. 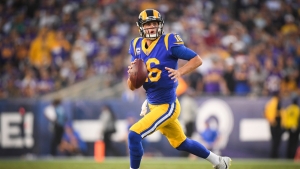 Buckle up. If his touchdown percentage increases, he could be a top quarterback this season

This past season, he had a team that couldn’t figure out exactly what they wanted to do. They had weeks that they ran almost exclusively 11 personnel (1 running back, 1 tight end) and weeks that they ran heavy 12 personnel (1 running back, 2 tight ends). It was a little bit odd how McVay decided to deploy his offense but it was likely in part due to the injury statuses of Brandin Cooks and Gerald Everett that caused uncertainty. They both had lingering injuries making it difficult for them to be trusted on and McVay would pivot week to week, but by the end of the year, they seemed to settle in. With COVID season coming up it’s going to be difficult once again going in week to week if players are going to be able to be trusted on but we already know what this team looks like in limbo. Whatever it is, it’s good for fantasy numbers. Before we leave the personnel conversation let’s look at how they were deployed at the end of the season because to the naked eye that’s when things started to click for Jared Goff. After a Week 12 beatdown given by Lamar Jackson and the Baltimore Ravens, Goff finished off the season as the QB6 when McVay started to deploy more 12 personnel. From weeks 13-17 they ran 12 personnel 34% of the time tied for third highest in that timeframe behind Philadelphia and Minnesota. Both of those teams had two very good tight ends so it makes perfect sense why those two teams would lead the league in 2TE sets but this season when the Rams have Tyler Higbee and Gerald Everett back both fully healthy, their tight end duo is going to be able to compete with anybody’s tight end room. While the season was a little bit back and forth in terms of how they deployed players when they turned more towards a common gameplan, Goff seemed to have more success. If Higbee and Everett end up healthy and the Rams go heavy 12 personnel, we could be looking at that success over the whole year.

Maybe the most attractive thing about targeting Goff is the skill position players that will be deployed around him. At the top, the Rams boast one of the best wide receiver duos in the league, Cooper Kupp, and Robert Woods. Brandin Cooks was traded over the offseason but Van Jefferson was drafted to replace him and they also have Josh Reynolds already on the roster.  In three-wide receiver sets they can deploy Woods, Kupp, and Josh Reynolds or Van Jefferson and in two tight end sets they can send out Woods, Kupp, Tyler Higbee, and Gerald Everett. The two receivers and Higbee have all been players that the fantasy community is buying into for this season and the best way to get all of them of course is to draft the quarterback who is going to be throwing them the ball. 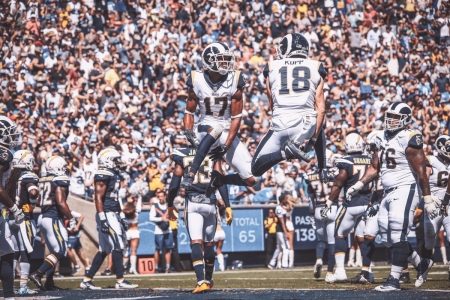 What’s even better is that you don’t have to draft him early like you might have to draft a different quarterback with impressive weapons. For example, the fantasy community is feeling great about the Cowboys offense with all of the weapons they have now in a McCarthy offense. The best way to get all of them is to draft Dak Prescott who already had the second-most passing yards in the league last year and only added talent and some experience. Or if you are all in on the Chiefs offense, and let’s be honest who wouldn’t be, drafting Patrick Mahomes allows you to get everyone’s production. The problem with drafting Patrick Mahomes or Dak Prescott is that you’re going to have to draft them really early possibly forfeiting grabbing your RB2 or WR2 in the process. When you’re drafting Jared Goff you’re getting Robert Woods and Cooper Kupp who both finished in the top 14 for targets last year while also getting Tyler Higbee who was the TE1 after week 12 all late in your draft. When you can get all of the production out of some guys you like for a discount, what’s not to like?

The value you’re getting when you draft Jared Goff is too easy.  He’s being drafted at QB19 which makes very little sense to me after he has finished as QB7 and QB13 the past two seasons. Fading him below is assuming regression after he had a very strong finish to the year with a new gameplan. His ADP is in the area of Ryan Tannehill, Jimmy Garoppolo, and Kirk Cousins. All of them are going to be in low volume offenses and while efficient will be capped most weeks because the offense won’t allow them to air it out. Goff’s coach, Sean McVay, is like the king of fantasy volume. He loves to play fast and he loves to throw the ball. Even after week 12 when he started to figure things out in more of a 12 personnel grouping, he threw the ball 43, 31, 51, 46, and 45 times. Usually, when you put two tight ends on the field it means more of a potent run game and a slower pace but even in that new grouping they still threw the ball and we know that when they get behind they amp it up and try and get back in the game. Their pace of play last year was top eight in every metric of game situation. They had the third-fastest overall pace and when trailing by 7+ were the fastest team in the league. The Rams defense ranked 10th against the pass and 10th against the run last year which aren’t terrible numbers at all, but Jared Goff still threw the ball a ton which makes me believe that sweet fantasy gold mine of a volume offense should still be there this year. Losing Todd Gurley should not hurt the team's fantasy volume especially after drafting Cam Akers to take over for him. With that being said there’s still nothing to fear about Akers taking away from Goff’s volume because when Gurley was the RB3 in 2018, Goff had the best year of his career. Last year, the offensive line was also atrocious and they did very little to improve that situation in the offseason so I expect the team to have to throw the ball to move it this year once again.

So if you’re looking for a late-round quarterback that can help your team remain strong at the quarterback position while grabbing good flex players at the top of your draft Jared Goff is a great target. In a 1QB league, you should be able to get him after the 10th round and that gives you nine picks to fill out your team before you even have to use one on a quarterback. In a superflex league, you should be able to get him in the fifth round which still gives a huge value because you can draft all of the flex players that everyone is passing on to get quarterbacks and still end up with a quarterback who could have similar production.