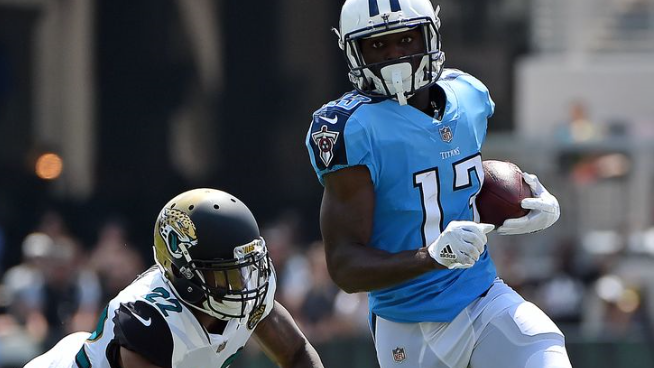 WR Keenan Allen did not participate in practice on Wednesday or Thursday but was able to get a limited session in on Friday due to knee and tooth ailments. The limited session on Friday isn't as encouraging as a full practice, lets hope this has more to do with his tooth issue than his knee and maybe the Chargers coaching staff was just giving their star wideout a break.

If for some reason he is out, both Tyrell Williams and Mike Williams get nice bumps in offensive involvement.  Each have been sharing around 10% target share so far - that probably doubles for both if Keenan can't go. Below is the Chargers full utilization break down:

WR Randall Cobb was added to the injury report and is considered to be a game time decision after limited practices on Thursday and Friday due to a hamstring issue.

Green Bay has been a four man passing attack so far this season, which often leaves someone left out of the box score each week.  If Cobb can't go, Davante Adams, Jimmy Graham and Geronimo Allison will all see increased utilization.  Cobb has accounted for 31%, 14%, and 25% of the targets in the first three weeks. Below is a full utilization break down for reference:

WR Golden Tate was added to the injury report on Friday after injuring his hip during practice.  He is listed as questionable, it is important to note that Friday adds are pretty rare and usually not a good sign for a player's chances on Sunday.

This is a three man passing game for the Lions so monitor closely Sunday morning and if Tate can't go it moves Kenny Golladay into must start status and makes Marvin Jones a very nice flex play in most leagues.  Full Lions utilization:

RB Matt Breida was downgraded from full participant to limited participant on Friday after being limited Wednesday but logging a full practice on Thursday.  Breida described himself as a game time decision for Sunday.

With Alfred Morris also ailing this means Raheem Mostert and Kyle Juszczyk could get more work if you are desperate.  This is a late game at the Chargers so monitor Sunday morning and have options available.

RB Alfred Morris was added to the injury report on Thursday with a knee issue.  He was limited Thursday and Friday.  See above.

RB Chris Carson was limited all week in practice due to a hip injury. This one isn't considered serious but still a situation to monitor Sunday.

If he is out it is a big upgrade for Rashaad Penny and a small upgrade to Mike Davis (Prosise likely out too).

TE Jake Butt tore his ACL on Thursday and unfortunately will miss the remainder of the season.

This could mean more targets for WR Courtland Sutton, TE Jake Heuerman and the running backs. If you are in a pinch at TE there are worse options than Heuerman. His snaps were declining with the emergence of Butt however, they were pulling in nice targets as a tandem and some of those have to go to him now.

First of all, if you haven't read Jim Day's weekly waiver wire article please do so here.  Each week in this space I will focus on a few areas:

WR Taywan Taylor is my top player this week because he checks multiple criteria off that I am big on:

Below are a few players that are progressing well and could return to the field as soon as this week but likely not later than the next couple of weeks.  This is not meant to be an extensive list and will not cover obvious guys like Marquise Goodwin or Doug Baldwin.

WR Alshon Jeffery - Questionable for this week due to his shoulder and an illness.  Even if he doesn't play this week he is close to a return.

TE Hayden Hurst - Questionable for this week, but participated in limited fashion every day.

He was set to be a major part of this offense before his injury.  If you are hurting at TE and have room for the long view approach here he is a good add.  Even if active I wouldn't trust him for week four action though.

WR Martavis Bryant - Increased snaps, routes per drop back, and targets each of last two weeks.

WR Terrelle Pryor - Increased snaps and routes per drop back each of last two weeks.

Robby Anderson routes per drop back peaked in week two when the Jets trailed most of the game.  Need to determine if Pryor is seeing field due to blocking (Anderson bad at this) or if he is truly ascending to the second WR on the team.

WR Cameron Meredith - Finally got on the field in week 3 and caught one pass for a touchdown.

Snaps and routes per drop back are currently too low, but want to see if he gets a bump in this explosive offense.

WR DeVante Parker - Like Meredith he also finally saw the field.  While he didn't get a touchdown, his utilization numbers were much stronger running routes on 77% of drop backs which only trailed Kenny Stills.

Folks are sick of this guy, but he was a 1st round pick with some talent so its worth monitoring.

Still has a way to go due to inconsistent routes per drop back and targets, but getting on field more.  A.J. Derby is likely inactive this week so Gesicki may get his chance to shine.

TE Jonnu Smith - Playing almost all the snaps and getting steady routes per drop back in low 80% range.

Like Taywan Taylor he could see increased volume with the departure of Rishard Matthews.  He is on the field and running routes which means there is a chance to integrate further.

WR Sterling Shepard - I was surprised to see Shepard available a few times in some of my larger leagues this week.  With Evan Engram out and the double coverage Odell Beckham Jr. is likely to see, Shepard has a WR3 floor and a WR1 ceiling this week vs the Saints (See Calvin Ridley).

If you are considering picking up Taywan Taylor or any of the others mentioned above but are struggling with who to cut, there are is a strategy I like to utilize when in this circumstance.  I call it floating.

This week Carolina and Washington are on bye.  Paul Richardson, Josh Doctson, and C.J. Anderson all fit the bill.  I have cut all of these players everywhere I can for Taywan with the exception of C.J. due to the size of the leagues I play in where free agent runners are extinct.

This week Anthony Miller (all leagues) and Jack Doyle (small leagues only) potentially fit this bill.

Well that is it for week four.  Good luck to everyone this weekend, unless you by some random chance are playing me!!!