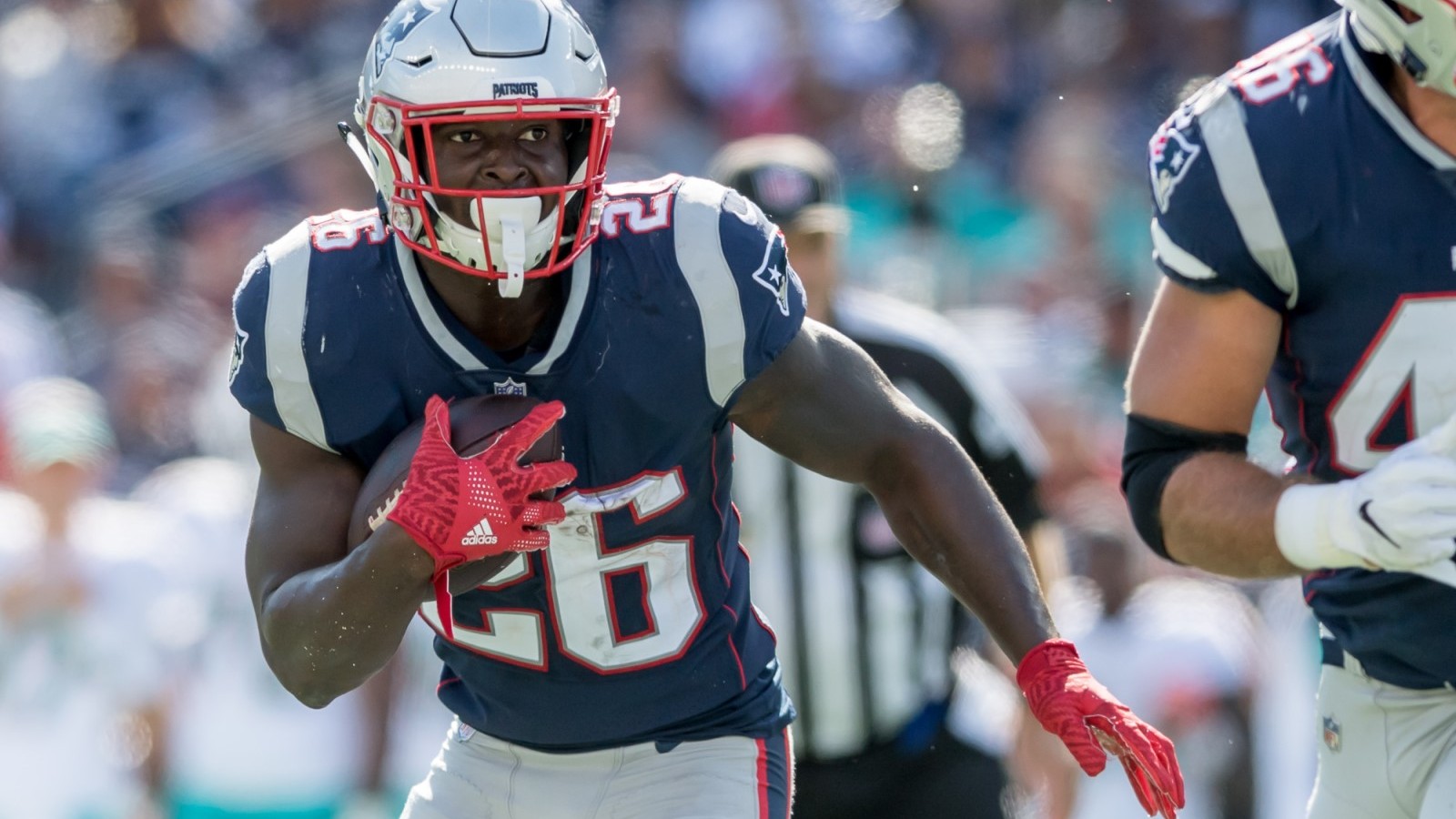 RB Sony Michel - Added to the injury report on Wednesday as limited with a knee ailment.  Limited participant on Thursday.

This is a Sunday night tilt versus the Chiefs so make sure you have options if Michel is limited or worsens on Friday's practice report.  Kenjon Barner is the next guy up assuming the Pats don't add a veteran on Friday.  I expect the Patriots to turn to the short passing game rather than lean on Barner if Michel can't go.  The Packers and 49ers play Monday.  If you can put Michel in your flex, you may have better luck finding a "break glass in case of emergency" player from that game like a Pierre Garcon.

RB Devonta Freeman - Freeman was limited on Wednesday and was a DNP on Thursday with a foot contusion.  This isn't looking good, but check Friday participation.

RB Isaiah Crowell - Has not been able to log a practice yet this week as of Thursday.  Monitor Friday participation.

If Crowell gets a full practice in Friday then we are probably okay here, but if it is a DNP or limited it is time to pivot away.  Bilall Powell gets bumped from flex worthy up to RB2 status if Crowell can't go.

Peterson insists he will suit up, but if you are depending on him I would make sure to have Kapri Bibbs rostered or on speed-dial.  With Chris Thompson battling his own ailments (below) Bibbs will be flex worthy if Peterson can't go.

If Thompson can't go, Kapri Bibbs could help ease the load for Peterson in the running game and the underneath passing attack.  If Thompson is out, but Peterson is active, Bibbs is a low-end flex option.

WR Jamison Crowder - Unable to suit up Wednesday or Thursday with an ankle issue.

The Redskins are dealing with a rash of injuries this week (Peterson, Thompson, Crowder, Richardson, Doctson, Davis) that is causing me to love Jordan Reed.  The coaching staff has been limiting Reed's snaps to preserve health, but may be forced to abandon that plan this week.  Crowder and or Chris Thompson sitting are the two scenarios that drive Reed's value most, as he works similar areas of the field in the passing attack.  Reed is a TE1 in these scenarios and even a strong flex play if your league allows TEs in that position.

WR Paul Richardson - Unable to suit up Wednesday or Thursday with shoulder and knee injuries.

As mentioned above, the Redskins are dealing with a litany of injuries right now.  Richardson looks unlikely to go at this point, but with Josh Doctson also being limited with a heel issue there isn't anyone we can feel good about projecting targets to other than Jordan Reed.

WR Chris Hogan - Showed up on the injury report Thursday with a thigh problem.

Hogan likely isn't in your fantasy line-ups at this point, but if he is this is something to monitor.  If he can't go, it likely puts Josh Gordon on the field more (assuming his limited status due to a hamstring allows him to play like the last two weeks).

WR Mohamed Sanu - Sanu has been limited this week with a hip ailment, but seems likely to play.

If Sanu can't suit up expect an increase in snaps and looks for Calvin Ridley.  Ridley would be a lock as a WR2 with upside.

TE Eric Ebron - Essentially, Ebron's whole lower body is bothering him (shin, quad, ankle, knee).  He has not practiced yet this week, so this one is concerning - especially if he can't go Friday.

Chester Rogers works much of the same area of the field out of the slot and already saw a spike in targets last week with Hilton out.  Should Ebron not suit up, Rogers moves into flex worth territory.

TE O.J. Howard - Apparently he used the bye week to his full advantage to rehab his balky MCL.  He has worked in a limited fashion Wednesday and Thursday.

Howard is trending in the right direction, but not a lock to play on Sunday.  If he doesn't go it would immediately move Cameron Brate into the TE1 conversation.  Howard works a good bit in the 3 WR sets as well so this could also slightly increase field time for Chris Godwin and Desean Jackson.

Quick PSA on Geoff Swaim, who I listed here last week.  When playing versus 34 defenses Swaim has ran less routes per team drop back due to blocking assignments.  Keep this in mind as we move forward.

There aren't any options this week that I feel great about, but if you are in a deeper league here are a few names to consider.

WR Albert Wilson - Wilson was a name folks were mentioning for the wrong reasons just a few weeks back.  He was the beneficiary of some fluky big plays and touchdown rates that were headed for the shadowy valley of regression.  However, it appears those performances have earned him favor with the Dolphin coaching staff.  In weeks four and five Wilson has asserted himself as one of the three primary pass catching options on the team with target shares of twenty-five and twenty-three percent.  Those numbers are supported by high underlying snap and routes ran per drop back percentages.

He is moving around the formation getting time outside, in the backfield and in the slot.  It is apparent that the Dolphins are scheming up opportunities for their off-season acquisition, which is always something we want to see as fantasy owners.

WR David Moore - Last week Moore flashed onto the box score radar with a couple of touchdown receptions.  What is more encouraging though are his opportunity drivers.  He has leaped Brandon Marshall and Jaron Brown on the depth chart and his snaps, routes per drop back, and targets have all surged over the past two weeks.  In week 5 he tied for 1st on the team in target share with twenty-two percent.

He is a sturdily built receiver (6'1" and 219 pounds) who didn't receive much fanfare coming into the draft as a small school prospect out of East Central Oklahoma.  The Seahawks saw something though as they spent a seventh round pick on Moore and he showed some promise this preseason.  He profiles as a prototypical Pete Carroll player - full of athleticism.

The Seahawks are reverting to their old ways with a slower tempo and heavy handed running game in 2018, so even a twenty-two percent target share has its limitations in this offense.   However, if you are in the deepest of leagues or a dynasty format he is worth grabbing now rather than later based on his recent increase in utilization and high end athletic profile.

TE Jack Doyle - The Colts are still calling Doyle "week to week" after missing the last three weeks with a hip injury.  This week he did earn the "doubtful" tag rather than being ruled out immediately which is a sign things are progressing.  This is an offense running as many plays as any team in the league and has little to no running game.  Doyle served as the primary tight end in week one and two, soaking up eighteen and seventeen percent of the targets.  He also outpaced Eric Ebron in snaps and routes ran per drop back.

Doyle is a must own and it's time to consider grabbing him now if he is available in your league.  He will instantly be a TE1 and will be in the top six conversation on a weekly basis given this years' woes at the position.  Don't let the Ebron surge lull you to sleep.  Doyle is the primary in-line tight end and runs routes out of all personnel groupings.  Ebron is a package player they like to utilize out of the slot and in red zone matchups.  Think Trey Burton to Zach Ertz last year with the Eagles (where HC Reich comes from).

This week New Orleans and the Lions are on bye - RB Theo Riddick, RB LeGarrette Blount, WR Ted Ginn Jr., WR Cameron Meredith, and TE Ben Watson are all candidates for floating depending on your league size.

This week WR Paul Richardson and WR Jamison Crowder could fit the bill if they end up inactive.

Well that is it for week six.  Good luck to everyone this weekend, unless you by some random chance are playing me!!!